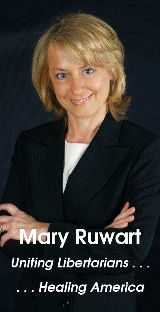 www.VoteMary2008.com
May 15, 2008
Ruwart Disappointed by Barr's Campaign Focus
"The Libertarian Party does not need a 'true conservative' at the head of its ticket in November, it needs a principled libertarian," said Dr. Mary Ruwart in response to Bob Barr's formal entry into the LP's presidential nomination race.
"Like many Libertarians, I was waiting to welcome Bob Barr into the presidential contest, but I was sadly disappointed by his obvious campaign focus when he finally made his announcement," Dr. Ruwart said.
Dr. Ruwart noted that Barr spent most of the news conference criticizing Sen. John McCain as not being a conservative and alluding to how he could win conservative Republican voters.
"Liberty is for everyone, not just the disaffected right," Dr. Ruwart pointed out. "We need a candidate who can show each and every American how liberty helps them achieve the health, wealth and happiness that we all desire."
"Barr barely mentioned the Libertarian Party, except to mis-characterize us as being similar to the Republican and Democratic parties," Dr. Ruwart said.
In response to a question about his chances of winning the LP nomination, Barr said, "But the one thing that unites all three parties – the Republican Party, the Democrat Party and the Libertarian Party – as three national parties of great substance is the fact that they want to win. They view themselves and believe themselves and will act as a political party, not debating society."
"For Democrats and Republicans, victory is equated with getting votes and winning elections," Dr. Ruwart remarked. "For Libertarians, the only victory that counts in the long run is helping the American people to embrace liberty. Once we've achieved that, winning elections will follow naturally."
"Winning votes or elections at the expense of our principles would be a loss for both the Libertarian Party and for America," Dr. Ruwart continued. "Mr. Barr wants to continue the War on Drugs and send troops to Columbia in order to do so. He wants to replace the Income Tax with the National Sales Tax, rather than cutting back spending enough to replace it with nothing. This is a message of 'liberty for some' rather than 'liberty for all.' "
Now that Barr is formally in the race, Dr. Ruwart said that she looks forward to hearing him directly answer questions from Libertarians about his positions.
"Embracing liberty is an evolution," Dr. Ruwart pointed out. "I can't fault Mr. Barr for how far down the road he's come. I'm just disappointed that I may have to wait for 2012 to see Bob Barr mount a true Libertarian campaign. Until he does, how can he help the American people understand what he does not?"

1 Comments in Response to Ruwart Disappointed by Barr's Campaign Focus

This article appears to make good points - as far as the points go. Now that Bob Barr has been chosed as the nominee I would like to have someone write an article (or a wiki page) documenting exact quotes with exact URLs that back up the points made by Ruwart.