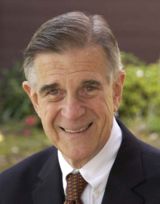 California Demublican Pete Stark is getting all stabby about some Army Generals observing the recent House vote to not approve $166 billion in emergency funding for Iraq and Afganistan.  Fueled, no doubt, by his incredulity that his esteemed colleague from San Fransisco didn't ensure that funding for the five and seven-year-old wars wasn't, you know, in the budget, Pete is outraged that the generals, their staffs, and drivers may be wasting taxpayer dollars by being present when they are on duty.

And, if anyone can recognize government waste, it's Pete.  This guy is a perennial recipient of the National Taxpayers Union's coveted "F" rating.  That qualifies Pete for the moniker of "Big Spender."  If Pete thinks it's wasting taxpayer dollars then you can pretty much hang your hat on it.  After all, if you're looking for a good prostitute, do you ask your clergyman or one of the Johns on the sheriff's website?

I'm sure Pete would agree that the issue here isn't taxpayer dollars, it's that Pete feels he's being intimidated into valiantly voting "present" for these funding bills.  I feel his pain.  Every year when I voluntarily fill out my annual dinner check, I feel Pete's presence, looking over my shoulder saying, "Ah, ah, AH!  You rounded down to everything when you should have rounded up to everything plus one!"

GAME ON: Using Unrest & Lockdowns to Rush Through Vaccine Bills

Nobody Knows How To Politicize A Pandemic Like Nancy Pelosi

REPORT: How Surveillance and 5G Are Being Fast-Tracked Under the Pretext of Fighting Coronavirus

Senate will not pass emergency coronavirus bailout for DAYS