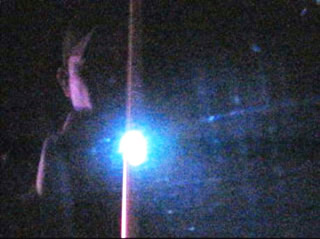 While driving to a remote work site late in the evening on May 14, 2008, I was targeted by a Federal Homeland Security Agent on roving patrol and followed for several miles along SR86 in Southern Arizona. After following me for some distance, the agent initiated a traffic stop absent reasonable suspicion along a deserted stretch of this unlit two lane highway. There were no developed shoulders along the side of the road making it impossible to completely pull out of the lane of traffic.

Additionally, the presence of several blind curves in the area make for dangerous conditions, especially at night. Testifying to this fact are multiple makeshift crosses from roadside memorials in the area.

SR86 is a public highway that runs East - West. It's also over 40 miles North of the international border with Mexico and never intersects the border at any point.

When I first noticed the vehicle, it was the second one behind me and closely trailing the car in front of it. Aggressive and dangerous driving by DHS Agents operating in the area is not uncommon. At the time, I couldn't make out any markings so I wasn't sure if it was a DHS vehicle. It was riding high off the ground however with headlights and a rough outline resembling the commonly seen CBP vans & trucks in the area that have been diverted from the border to target domestic traffic.

After following me for several miles, the agent turned on his flashing red & blue lights and passed the vehicle in front of him. 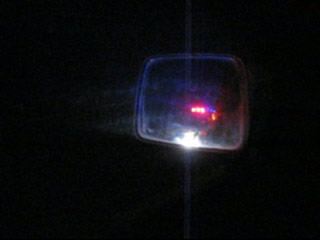 He stayed in the opposite lane until the distance between myself and the other car widened enough for his patrol vehicle to squeeze in behind me.

I pulled over a short distance later and turned on my video camera.

The agent's radio was on as he approached and I could hear someone state a 10-29 check had come back negative (wanted person's check?) followed by my name, a description of my vehicle and my address.

Standing slightly back from the driver's side door, the agent said nothing as he shined his flashlight into my vehicle. With my camera up however, he began backing away a short time later.

As he backed away, I asked him why he stopped me and what his name was. He stood behind my vehicle and said nothing. The second time I asked, the agent indicated he wanted me to roll my window down but otherwise refused to identify himself or the reason why he stopped me. Since he initiated the stop, his refusal to inform me as to who he was, why he stopped me, or even make any inquiries was very strange indeed.

A few moments later, the agent went back to his vehicle and drove away without any explanation as to why he arrested my travels and invaded my privacy.

It should be noted that Federal Homeland Security agents operating in Pima County, Arizona are not certified by the Arizona Peace Officer Standards & Training Board. As such, they are not authorized to exercise the powers of Arizona peace officers. This means federal agents on roving patrol can only (legally) stop an individual when they have reasonable suspicion to believe the person has violated a federal law they have jurisdiction over.

In this case, the agent needed reasonable suspicion to believe I was either an illegal alien or transporting illegal aliens. The agent's own field manual also makes this clear:

18. Warrantless Search and Seizures (e) ”...INS officers on roving patrol may stop a vehicle only if aware of specific articulable facts, together with rational inferences from those facts, that reasonably warrant suspicion (reasonable suspicion) that the vehicle contains illegal aliens.”

Since the agent had no compelling questions for me after initiating the stop (at least after seeing my camera and getting my name from dispatch), he obviously had no reasonable suspicion to legally initiate the traffic stop to begin with.

Prior to 1975, the U.S. Border Patrol, as a matter of policy, routinely violated the U.S. Constitution by utilizing roving patrols to randomly pull vehicles over to interrogate occupants and search vehicles absent reasonable suspicion. Eventually, a case challenging these actions percolated up to the U.S. Supreme Court which struck down such practices as unconstitutional – see United States v. Brignoni-Ponce.

Given my experience on the evening of May 14th however, it would appear that this illegal practice hasn't been abandoned by Homeland Security. Rather, agents pull over vehicles absent reasonable suspicion looking for an easy mark. If they find someone who knows their rights, they quickly back off. Otherwise, they see what they can get away.

This illegal practice shouldn't surprise anyone. According to a Border Patrol supervisor I met with several years ago regarding similar issues, I learned that as a matter of policy, the agency doesn't keep records of traffic stops that don't result in an arrest or a seizure - convenient!

This makes it impossible to use agency records to determine the overall effectiveness of the roving patrol program or whether the agency routinely violates individual rights during roving patrol traffic stops.

Those of us who live within one hundred miles of the border don't need agency records to know the answer to these questions.

I was pulled over without reasonable suspicion by an armed federal agent along a deserted stretch of an unlit two lane highway late at night with no developed shoulders to safely move out of the lane of traffic. The agent approached my driver's side door and shined a flashlight into my cab without a word of explanation before backing away after seeing my camera and hearing the dispatcher's report. The agent then refused to identify himself or the reason for the stop before getting back into his patrol vehicle and leaving the scene.

Given my previous documented experiences along this stretch of highway, it's unclear whether I was purposefully targeted or if I just happened to be in the wrong place at the wrong time. Regardless, it should be clear that this traffic stop was illegal and the traveling public is being put at risk, both legally and physically, by DHS agents with little respect for individual rights and the rule of law.

A recent article in the Arizona daily Star highlights two CBP agents being retaliated against for revealing the widespread practice of illegal traffic stops by Border Patrol Agents. This practice is commonly referred to as 'shotgunning' and takes place when a Homeland Security roving patrol makes a traffic stop absent reasonable suspicion as was the case in my video above.

The article can be accessed at: