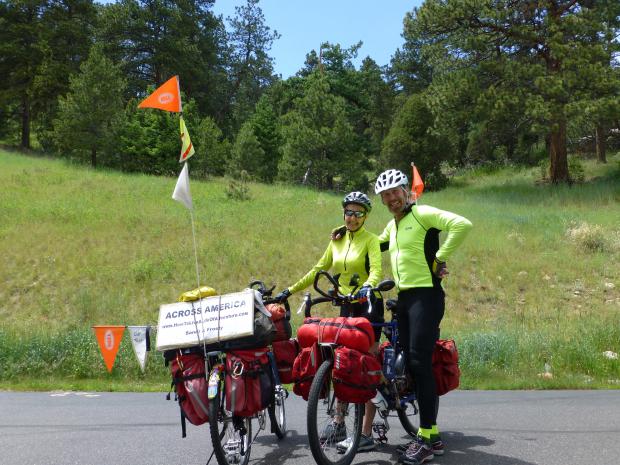 Sandi and Frosty on tour of the USA

During Thanksgiving, let us do our best to lighten our emotional loads by appreciating our friends, thanking our parents, enjoying our neighbors and forgiving those who have hurt us.  Let us all work as Americans toward a more peaceful, united and stable society.  May we all smile, thrive and bless all we meet during this season of "Thanksgiving."

Back in high school, rumors started as fast as a lightning storm to destroy any girl's reputation.  Often out of jealousy for some perceived transgression, classmates concocted stories to create hurt for another person.

(If you look closely, you can see a cyclist navigating that dirt road leading into the Valley of the Gods, Utah.  During your lifetime, you face curving roads, blind corners that you can't see coming and things up ahead that you can't imagine. You will also meet friends, moments and predicaments that bewilder you.  Keep pedaling, paddling or hiking toward your truest self.  The journey will reward you with an amazing life.)

As we grew older, most of us learned through the years that everyone paddles his or her canoe as best they can on this unique journey through life.

But along the way, in most communities around the world, people talk about other people. They make judgments. They hold verdicts. They render conclusions based on their perceptions.

Someone always gets emotionally damaged by bitter reprisals, anger, gossip and other peoples' frustrations.

It's been said, "Life begins at the end of your comfort zone."

I once knew a friend who carried grudges against those who wronged him.  He piled them into a potato sack that he slung over his shoulder every day when he traveled to work. When I saw him for lunch one day, he carried on about new additions to his "potato sack full of grudges."

Finally, I said, "Jack, you carry so many negative thoughts about folks who have done you wrong that you keep piling complaints into that sack that you carry around on your back.  The more you complain, the more you add to the sack—I think it must be getting pretty heavy and pretty rotten.  Have you ever thought of forgiving all those who wronged you?"

"People can be harsh, unfair, perverse, dishonest and irrational," I said.  "Just forgive them anyhow.  Forgive them unconditionally in your own mind and heart.  They don't need to know it.  You don't have to tell them.  Just know that you forgave them.  In doing that, you forgive yourself.  It's really freeing."

Jack seemed to "click" the solution into his mind. From that day, he let go of his anger, bitterness, frustrations and disappointments he experienced with people.  One of the best things he did: Jack associated with people who supported him. He fled "those" people who remained in his former paradigm.  He changed jobs.

The facts:  if you grow into a successful person, others may deride you.  Forgive them anyhow.

It's possible that if you maintain honesty and speak your mind, others may call you names or betray you.  Forgive them anyhow.

You may build a business or work hard to succeed, but someone undermines you.  Forgive them anyhow and move toward your dreams on your earned experiences.

If you show positive energy and aliveness, others may be jealous and display their envy.  Guess what?  Forgive them anyhow.

In my lifetime, I have picked up a million pieces of trash from rivers, lakes and streams. Also, I picked up trash in the oceans, along roads and in parks.  I've organized major river/trash pickups. Nonetheless, people keep throwing it.  As angry as it makes me, I forgive them anyhow.

Therefore, you may do good things in the world, but people don't care and forget quickly.  Do your good anyhow.

While the world disappoints, frustrates and diminishes everyone along the journey, give the world your best anyhow.

During and at the end of your life, you discover that you define your journey, how you live it and how you maintain yourself in the whirling tempest of living.

Shakespeare's Polonius in Hamlet said, "Neither a borrower nor a lender be. For the loan oft loses both itself and friend, and borrowing dulls the edge of husbandry.  This above all else, to thine own self be true, and it must follow as the night the day, though canst be false to any man."

Interesting because Polonius' detractors spoke of him as overly officious, garrulous and impertinent.

Be yourself anyhow, because in the end, it's all between you and the Great Spirit (God) that expresses through all of us.

Happy Thanksgiving from our house to your house. Sandi and Frosty Wooldridge, Golden, CO.

1 Comments in Response to This Thanksgiving: Forgive Them Anyhow

Absolutely. Forgive everyone for any wrong that they have done to you. This is one of the key features of being forgiven yourself. But remember one thing. Forgiving someone doesn't mean that you are required to place yourself in future harm's way regarding them. For example. Forgive the rapist who raped you, the thief or robber who stole something from you, and the politician who made laws that harmed you. Then see to it that these people are thrown into prison, not as punishment, but so they won't harm you or your family any longer. For your protection. Not for revenge or punishment.

What Soul Age Are You?

Gandhi on Jesus and Money

Synagogue of Satan: Why It's Time to Leave the Corporate Christian Church

How Meditating with My Younger Self Changed Me

Roger Penrose On Why Consciousness Does Not Compute

Physics of the Ascension

Religion gives life meaning. Can anything else take its place?