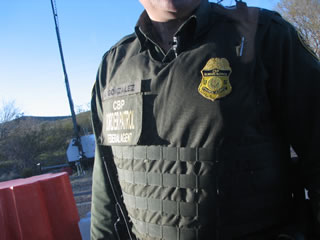 According to the news articles linked to below, the Department of Homeland Security has continued the expansion of its un-American enforcement activities by directing them against Washington State residents utilizing Northwest domestic Ferry services.

Despite the fact that the Ferry services in question never cross an international border, this hasn't deterred Homeland Security agents from directing scarce 'security' resources against Washington State residents absent reasonable suspicion of wrongdoing. Thus proving once again that DHS either has no clue on how to defend the 'Homeland' or no intention of doing so.

Rather the specter of terrorism and illegal immigration are used as excuses for the continued expansion of federal influence and control at the expense of the founding principles of this country.

While recent events in Washington State are being mimicked in one form or another in border states across the country, I'd like to bring attention to a quote from attorney Matt Adams of the Northwest Immigration Rights Project:

Because these checkpoints are not on the border, people have a greater right to privacy, Adams says.

"What I suggest to individuals is to politely refuse to answer questions, and then if they still don't let you go, to say 'Am I under arrest? If I'm not under arrest, I'd like to continue on my way,' " he says.

Words we all need to take to heart as 'Homeland Security' intrusion continues to grow in our daily lives.

Putting a stop to the burgeoning American police state will not happen from the top down. It will only happen when enough individuals decide to take individual action in common cause.

Several recent articles detailing this story appear below along with links back to the original websites: