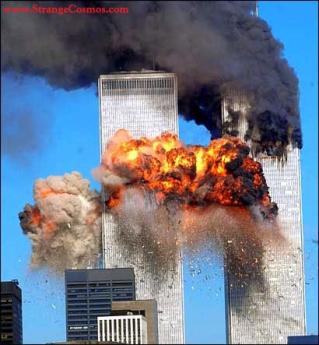 For Immediate Release
CONTACT:  Senator Karen S. Johnson  (602-926-3160)
Arizona Legislator Karen Johnson Asks McCain to Meet on 9/11
Arizona state senator Karen Johnson (R-18) today delivered a letter to the office of U.S. Senator John McCain asking him to meet with a group of professionals to discuss the events of 9/11 when terrorists hijacked four airplanes and attacked the World Trade Center and the Pentagon.  One plane crashed in Pennsylvania.
Johnson recently announced her support for a new, independent investigation of 9/11.  “Even the chairman of the commission has announced his dissatisfaction with the report,” said Johnson.  “Anyone who reads the report can see that much was left out and that there are many discrepancies,” she said.
Johnson’s letter requests that McCain allow a meeting with Scottsdale professor, Blair Gadsby, who has been on a hunger strike outside McCain’s office on 16th Street for nine days.  Gadsby has arranged for architect Richard Gage and physicist Steven Jones to meet with McCain at his convenience to present evidence of controlled demolition gathered from the ruins of Ground Zero.  Gage is the founder of Archetects & Engineers for 9/11 Truth – a group consisting of hundreds of building professionals who want Congress to open up a new investigation of 9/11. Dr. Jones is a physicist who has done laboratory analysis of residue from the rubble of the World Trade Center and found evidence of explosives.  Both Gage and Jones believe that the Twin Towers and Building 7 collapsed as a result of explosives that were planted in the buildings before September 11.
“Their evidence is very significant,” said Johnson, “because it wasn’t presented to the 9/11 Commission when they did their original investigation, and it completely changes the conclusions of the Commission.  There’s nothing wrong with going back and having another look.  If the Commission didn’t have all the facts, then so be it.  But we need to know what happened on 9/11.  Nearly 3,000 Americans died that day, and we deserve to know the truth about what happened.  It’s time to get to the bottom of this.”
Johnson and Hunger-Striker Gadsby want McCain to allow Jones and Gage to present the evidence to him.  “Senator McCain wants to be elected to the highest office in this country,” said Senator Johnson, “and he needs to know the truth about 9/11.  Finding answers to 9/11 should be a significant part of this presidential campaign.  The events of 9/11 led to this war with Iraq, to the creation of the Dept. of Homeland Security, to the loss of habeus corpus, the use of wiretaps, the push for a national ID, and other legislation that deprives us of freedom.  This is a very significant issue, and no one is discussing it.  Our presidential candidates need to talk about this.”
< 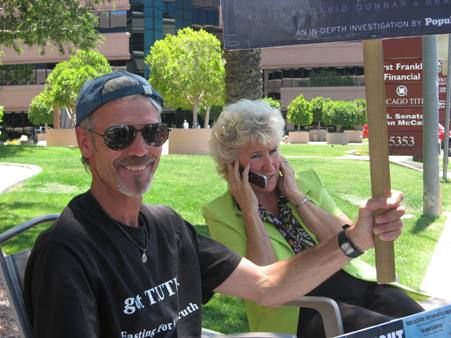 June 3, 2008
Senator John McCain
U.S. Senate
241 Russell Senate Office Building
Washington, D.C.  20510-0303
Dear Senator McCain:
You are no doubt aware that a “Hunger-for-Truth” hunger strike is taking place outside your Phoenix office.  Each day since Memorial Day (May 26), Blair has arrived at about 6 a.m. and spent the day until approximately 10:30 p.m., distributing literature about 9/11 to passing pedestrians and motorists.  Blair is not eating any food at all and drinks only water.  Today is Day 9 of the hunger strike.
Blair and his thousands of supporters around the country are requesting that you give two hours of your time to some experts who would like to present evidence about the destruction of the Twin Towers and Building 7 on Sept. 11, 2001.  We all appreciate how full your schedule is, but the many important unanswered questions about 9/11 demand answers.  I am respectfully requesting that you meet with Blair and the experts he has arranged.  I understand that you hae promised to address the 9/11 issue in the near future.  For this I am grateful.
You might have heard some absurd claims about 9/11, but we are not responsible for what all 9/11 skeptics say.  We are responsible only for what WE say, and what we say is rock solid.  Well qualified professionals in the fields of physics, engineering, and architecture reject the idea that the World Trade Center buildings came down as a result of the impact of the planes and fire.  Building 7 wasn’t even hit by an airplane and the fires in that building were small and contained.  Yet all three skyscrapers came down very evenly and very fast.  These experts have analyzed the evidence with sound scientific procedures and have concluded that the buildings came down through the use of explosives as are used in controlled demolitions.  I have spoken with these experts myself, and I agree with their findings.
The American people expect and deserve complete answers to what was really involved in the most lethal attack on U.S. soil Since Pearl Harbor.  The families of the innocent victims of U.S. military action in Afghanistan and Iraq also deserve to know the truth.  The events of 9/11 need to be investigated thoroughly and openly.  That hasn’t been done yet.
Please give Blair and his experts the time they need to provide you with this very important, credible information.
Best regards,
Senator Karen S. Johnson
KSJ:kw