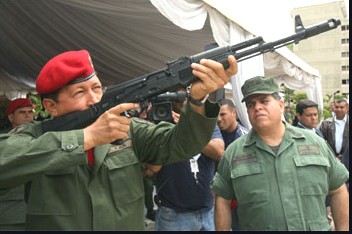 Reports keep surfacing about new threats against Hugo Chavez. Given past ones, they can't be taken lightly. Chavez is alerted and reacts accordingly. Case in point: revamping Venezuela's decades old intelligence services. It's long overdue and urgently needed given the Bush administration's tenure winding down and its determination in its remaining months to end the Bolivarian project and crush its participatory democracy.

CIA, NED, IRI, USAID and other US elements infest the country and are more active than ever. Subversion is their strategy, and it shows up everywhere. Violence is being encouraged. Opposition groups are recruited and funded. So are members of Venezuela's military. Student groups as well and anti-Chavista candidates for November's mayoral and gubernatorial elections.

New tools will be used and current personnel retrained and vetted for their Bolivarian commitment. DISIP and DIM are outdated. They've been around since 1969 to serve the "capitalist vision" of that era. Ever since, they've been "notoriously repressive" and closely aligned with the CIA. Therein lies the problem. Chavez intends to fix it. The dominant media reacted. They're hostile to change and showed it their reports.

The New York Times' Simon Romero has trouble with his facts. He headlined "Chavez Decree Tightens Hold on Intelligence." He referred to the new Law on Intelligence and Counterintelligence that passed by presidential decree under the legislatively-granted enabling law. He failed to explain that the 1969 law passed the same way, and that Venezuela's Constitution then and now permit it.

Instead, he noted a "fierce backlash here from (mostly unnamed) human rights groups and 'legal scholars' who say the measures will force citizens to inform on one another to avoid prison terms....The new law requires (them) to....assist the agencies, secret police or community activist groups loyal to Mr. Chavez. Refusal can result in prison terms of two to four years (and up to) six years for government employees."

Once again, Romero falls short on credibility. Hyperbole substitutes for truth as in all his reports. No country more respects human rights than Venezuela, and Chavez is committed to them. To the rule of law as well and social justice. The country's Constitution mandates it, and government officials are bound by it. Appointed officials with other aims have no place in it. They need to be exposed and replaced but need fear no recrimination unless they violate the law.

The new one won't create "a society of informers" as one of Romero's sources stated. Nor will it imprison Venezuelan citizens or let Chavez "assert greater control over public institutions in the face of political challenges following a 'stinging' defeat in December('s) constitutional (referendum) that would have expanded his powers."

It will insure greater "national security" and protect against "imperialist attacks" as Chavez explained. It's to preserve Bolivarianism against persistent attempts to destroy it. It's to serve all Venezuelans, advance a new 21st century vision, and put people ahead of privilege. It's to counter Bush administration efforts to restore neoliberalism, return the old order, and destroy social justice in the region's most model democracy.

Without explaining Venezuelan law or its legislative process, Romero states that the "law (was drafted and passed) behind closed doors, without exposing it to....public debate (and that) contributed to the public uproar and suspicion." His "public," of course, are elitists. They target Chavez for removal, denounce all his beneficial changes, and falsely accuse him of governing dictatorially.

"They" claim "justice officials, including judges, are required to actively collaborate with the intelligence services rather than serve as a check on them." According to Americas director for Human Rights Watch (HRW), Jose Miguel Vivanco: "This is a government that simply doesn't believe in the separation of powers....(It requires) the country's judges (to) serve as spies for the government." Vivanco knows better and damages HRW's credibility with comments like these. Romero uses them with relish to aid the imperial project.

Venezuela's internal threat is unmentioned. Rogue elements infest the government and military. They oppose democracy and social justice. Washington supports them. They must be found and removed. Venezuelans demand it. Better intelligence will help. Romero won't report it. Instead, he inverts truth and sides with forces trying to destabilize and undermine a government of, by and for the people.

He quotes "a prominent legal scholar" (in fact, right wing lawyer Rocio San Miguel) saying "This is the most scandalous effort to intimidate the population in the 10 years this government has been in power. Under the new law (information I have) could be considered a threat to national security and I could be sent immediately to jail." Indeed she could if she violates the law or tries to subvert the government. Otherwise, she's entitled to all benefits and protections Venezuelan law affords everyone. No comment from Romero.

AP echoed The New Times in its headlined May 31 report: "Venezuelan intelligence law draws protests, seen as potential tool against dissent." Again, it's false and misleading and part of the imperial plot against Chavez. AP unfairly equates the new law to the USA Patriot Act, when, in fact, it's totally dissimilar. The US law violates constitutional civil liberties. Venezuela's respects them, but it's easy for protesters to claim otherwise.

Justice Minister Ramon Rodriguez Chacin explained the difference. US law spies on Americans and denies them legal protection. Venezuela's law enlists responsible citizen participation in preserving their government. They have a stake in "state security and resolving crimes. If (they) witness (wrongdoing and) hide it, then (they) are an accomplice to that crime." It doesn't require people to spy. It wants them to cooperate and be engaged in preserving Bolivarianism and to report threats against it. It's to make them responsible citizens united for their common self-interest.

That's not how BBC sees it as part of its anti-Chavez agenda. Its June 3 online report highlighted: "Venezuela 'spy' law draws protest....among groups who say it threatens civil liberties." One of them is HRW's Vivanco again voicing the same false and misleading statements about "judges serving as spies." Another source, with a clear anti-Chavez agenda, says the "law may be used as a weapon to silence and intimidate the opposition."

In fact, Chavez champions free expression in all forms unlike in America post-9/11. Repressive laws and presidential executive orders stifle it. Activists are targeted, harassed and imprisoned. Illegal spying is institutionalized. So are repression, torture and disdain for the rule of law. Where are BBC, AP, The New York Times and other dominant media voices? Why aren't they exposing police state justice? Instead they denounce democracy, ally with despotism, and acknowledge no hint of hypocrisy.

Chavez is mirror opposite his media critics and counters them correctly. He calls the USA Patriot Act "dictatorial law." In contrast, the new Venezuelan one upholds freedom, seeks to preserve it, and is within "a framework of great respect for human rights." It will combat US subversion that dominant media sources ignore. They blame victims instead and are willing co-conspirators against Venezuela's model democracy. Their latest efforts show why Chavez needs all the defense he can marshal against them, and for all the right reasons.

Also visit his blog site at sjlendman.blogspot.com and listen to The Global Research News Hour on RepublicBroadcasting.org Mondays from 11AM to 1PM US Central time for cutting-edge discussions with distinguished guests. All programs are archived for easy listening.