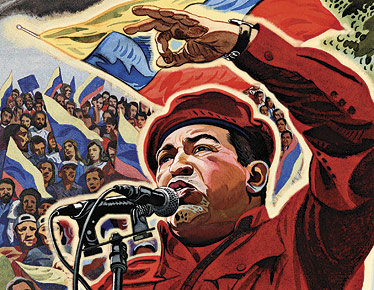 Over the weekend, Chavez showed his mettle as a democratic leader. He acknowledged "errors" in the newly enacted Law on Intelligence and Counterintelligence and will fix them to assure it fully complies with Venezuela's Constitution.

He gave examples and cited Article 16 that cites the possibility of prison terms for persons not cooperating with intelligence services. It's a "mistake," said Chavez and "not a small (one)." The new intelligence services won't oblige anyone to inform on others. Doing so is "overstepping," and "I assume responsibility" for the error and will fix it.

He continued: "Where we make mistakes, we must accept this and not defend the indefensible....I guarantee to the country, in Venezuela (this law will assault) no one! And no one will be obliged to say more than they want to say....(We) will never attack the freedom of Venezuelans, independently of their political positions. Liberty....is one of the slogans of our socialism."

Other articles will also be amended:

-- Article 20 regarding search and wiretap provisions; and

The new law will be reviewed in its entirety. Whatever is potentially unconstitutional will be removed or amended. Chavez guarantees it. He's a man of his word, but the corporate media took full advantage of the moment to jump all over him. As usual, The New York Times' Simon Romero led the assault.

He headlined: "Chavez Suffers Military and Policy Setbacks" with the front end of his lead referring to Colombia's (unsubstantiated) claim about capturing a Venezuelan national guard officer carrying assault rifles "believed to be intended for leftist guerrillas."

Once again Romero fumbles with the facts as he always does on Venezuela. He now states: "President Hugo Chavez....said Saturday he would 'withdraw' a decree overhauling intelligence policies that he had made earlier that week." He called it "a rare act of self-criticism" while hammering on the "capture" issue and filling paragraphs with inaccuracies.

Even Al Jazeera got it wrong on intelligence law changes. It headlined: "Chavez revokes controversial law." Near the end of its report, however, it acknowledged that Chavez promised to "rewrite the law (after) listening to the criticism."

For its part, AP was more accurate but barely in its headline stating: "Chavez backtracks on Venezuela spy law." The report's lead does say: "President Hugo Chavez said....that his government will rewrite a new intelligence law to calm fears....that (it) could be used to stifle dissent."

BBC was more accurate than usual in its headline: "Chavez agrees to change 'spy' law." It continued: "Venezuelan President Hugo Chavez said he will amend a controversial new law that would have required people to co-operate with intelligence agencies." BBC's report was mostly critical, but it ended on a high note with an accurate Chavez quote that "No one will be forced to say anything (to authorities) they don't want to."

For his part, Romero wasn't as gracious. He stressed how Chavez is "Reeling from the defeat of a constitutional reform in December (and) is facing multiple challenges as a reinvigorated opposition fields candidates in (November's) regional elections and Venezuela's economic growth slows despite record oil prices." Slower growth - yes, still impressive - very much so. Where does Romero acknowledge this - nowhere.

Also visit his blog site at sjlendman.blogspot.com and listen to The Global Research News Hour on RepublicBroadcasting.org Mondays from 11AM - 1PM US Central time for cutting-edge discussions with distinguished guests. All programs are archived for easy listening.