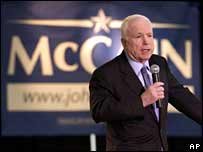 PRESS CONFERENCE- June 18, 2008, Washington D.C.
VETERANS &_POW/ MIA FAMILIES SPEAK-OUT ABOUT THEIR DECADES OF PERSONAL EXPERIENCE WITH JOHN McCAIN AND HIS HYPOCRITICAL AND ONGOING BETRAYAL OF VETERANS
John McCain is running on his “war hero” status, but will a President McCain be accountable to future service members, veterans and their families?
Some current veterans and their families,  including those of POW/ MIAs whom McCain betrayed and left in captivity-- as well as his own record-- say, “NO!”
Senator John McCain is running for president on his “war hero” status, while also being one of the most vocal proponents for continued military occupation of Iraq and a potential new war with Iran. Rather than helping other living veterans from all of America's recent conflicts, and the families of existing POW / MIAs, McCain, since entering Congress in 1982, has actively blocked their attempts to find justice for themselves and their loved ones. This while he portrays himself as a veterans' advocate, and while the U.S. media goes along with this myth.
The conference speakers include veterans of Senator McCain's formative generational experience -- the Vietnam War.  Also speaking will be families of service members still listed as unaccounted POW/ MIAs of that war.  For decades, they have experienced Senator McCain's resistance to fully explore all possible evidence regarding the fate of their loved ones.  They have seem McCain actively sabotage their attempts to find their loved ones and also their efforts to spare other military families from experiencing the same heartache in the future.
They have also witnessed McCain exhibit volatile temper behind-the-scenes, including one incidence of physical violence directed against the relative of a Vietnam MIA. In their opinion, he has shown an utter lack of compassion toward many grieving family members.
Their own experiences with McCain make them question whether John McCain as Commander- in-Chief is capable of being accountable for decisions he would have to make to send future generations of young men and women into armed conflict.  Based on his record, they also question whether he has the compassion to assure proper care for veterans and their families when they suffer the consequences of war.
In 1996, McCain worked behind-the-scenes to delete major provisions for protection of MIAs in the Missing Personnel Act, part of the FY 1997 National Defense Authorization Act.   These provisions would have protected POW/ MIAs in the future.
A recent example of McCain voting against veterans' interests was his vote against the Senate-approved GI Bill S. 22.  This bill provides education benefits to post 9/11 GIs.  McCain's "no" vote drew criticism from America's largest veterans' service organizations. He was among only 22 senators who voted against the bill.  Although the merits of the total bill can be debated, the reason McCain gave for his "no" vote was that enhanced educational opportunities would cause service personnel to drop out of the military, thus not enough service personnel would be available to fight new wars.
The press conference is not sponsored or funded by any political party or political special interests. The speakers do not belong to any campaign-related veterans groups.  They are simply concerned for the well being of military service members and their families.
SPEAKERS (these speakers and other veterans / family members will be available for follow-up interviews):
Al Santoli, three-time wounded Vietnam combat Veteran, former congressional advisor, and NY Times best selling author of “Everything We Had: An Oral History of the Vietnam War.”  Eleanor Apodaca, the sister of a MIA Air Force pilot, and an Arizona constituent of John McCain.  Eleanor has had many interactions with the Senator about veteran-related issues. Carol Hrdlicka, the wife of an Air Force pilot who was photographed alive in captivity in Laos, but was not returned.  Carol has also interacted  with Senator McCain about veterans’ issues. Mike Benge, former POW from the Vietnam War.
Mike, a recipient of the State Department's highest award for heroism, retired in 2007 from USAID.  He is a former US Marine and a leading expert on human rights in Southeast Asia.
When:
Wednesday, June 18, 2008, 2:30 to 3:30 PM.
Where:
NATIONAL PRESS CLUB
MURROW ROOM
529 14th Street NW, Washington D.C.
Contact:
Claire Brown
Phone: 310-479-9698
ClaireLC@mac.com
Carol Hrdlicka
Phone: 620-456-2439
Cell: 316-641-7748
Hrdlicka@aol.com