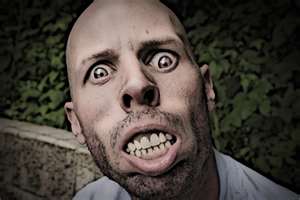 There are several forms of mental illness of killers the public knew but cannot avoid. I am referring to mentally disturbed “patients” who should have been hospitalized instead of being allowed to roam around without straitjackets. The National Institute of Health estimated 1 out of 17 Americans 18 years old and over are having this “serious mental disorder”.

Those dangerous “mental disorders” are scientifically identified as follows:

Acromania, is a violent form of mania; it is an incurable insanity. Read more: http://www.faqs.org/ologies-isms/Ide-Lef/Insanity.html#ixzz1kxpmkuGb.

Paranoia, a mental disorder characterized by behavior that stems from an elaborately constructed system of delusions of persecution and grandeur… paranoidism. Read more: http://www.faqs.org/ologies-isms/Ide-Lef/Insanity.html#ixzz1kxpPMYmP

Acromania and Schizophrenia are more prevalent. The symptoms of one or a combination of these mental disorders manifest in what comes out from the mouth of the afflicted. I will cite to you some of those mental thoughts expressed by mentally imbalanced killers that identify them who they really are:

“Any linkage between the British government and these terrorist outrages is completely without foundation.” From Jack the Ripper. Like today’s terrorist, the Ripper denied his terror as a serial killer of women who walked by night. “One day men will look back and say I gave birth to the twentieth century.” [Delusion of grandeur.] Does this delusion of grandeur not remind anyone of someone they knew but cannot avoid?

Charles Manson, a notorious psychopath jailed for life has his signature of denying the multiple murders he orchestrated: “Believe me, if I started murdering people… there'd be none of you left!” Manson’s severe case of mental disorder can be categorized as advance Acromania and Schezophrenia. This denial is his infamous hallucinating signature to kill in a treacherous way.

Theodore John Kaczynski, the Unabomber, killed by sending mail bombs to his victims in protest of his imagined “Technological Slavery”. Reports stated that “He was the target of the FBI's most expensive manhunt ever…” This is his urge to kill: “In the modern world soldiers fight because they have been brainwashed into believing in some kook ideology such as that of Nazism, socialism, or what American politicians choose to call "freedom".” Does this sound familiar? Some dangerous Kooks say this every day. A notorious Kook expressed this even more eloquently in many of his writings published in this website.

Jared Loughner, demented “Arizona Shooter” was “a United States Military recruit at MEPS in Phoenix …” Without any provocation, he shot several people dead. A banner shock-story run the number of victims as follows: “At least 18 people … including Congresswoman Gabrielle Giffords, at a public event in Arizona hosted by elected leaders and other government officials. Six have been declared dead, one of them a child.”

After the shooting, Loughner – like Charles Manson – denied to the Media that he was a terrorist. This is his own words:

“The argument to call me a terrorist is Ad hominem….read the United States of America's Constitution to apprehend all of the current treasonous laws. "In conclusion, reading the second United Sates Constitution, I can't trust the current government because of the ratifications: The government is implying mind control and brainwash on the people by controlling grammar.” You can deduce from these incoherent statements how serious his mental illness was.

But as a killer and a bomber, Timothy James McVeigh’s terrorism was incomparable. His murderous act was “the deadliest event of domestic terrorism in the United States, and the deadliest act of terrorism within United States borders until the September 11.” [Main Stream Media.] How did he justify the infamous Oklahoma City bombing he perpetrated without any sign of remorse? “Whether you wish to admit it or not, when you approve, morally, of the bombing of foreign targets by the U.S. military, you are approving of acts morally equivalent to the bombing in Oklahoma City.” He said this after he was sentenced to death and about to be executed for the massive destruction he created, killing at least 168 people.

Through this website, the public should be made aware of mentally disturbed terrorists on the loose -- killers majority of Americans already knew but cannot avoid.

My concern is that most of us are not only aware of their presence around us -- in fact I suspect they are known to the FBI – but we support and encourage them at least by publishing their statements that are clearly symptomatic of any of the mental disorders killers manifest before and after they kill.

I applaud anyone who dares to expose government tyranny. I don’t care whether or not that tyranny is real or imagined, because that is the role of concerned patriots, one way or another. But to publicly “incite”, “persuade”, “induce” or even “command” people to kill with such blinding passion if not uncontrollable hatred, is the role no longer that of patriots but of criminals.

I do not need to convince you that such browbeating niceties in print do not come from a healthy mental disposition – it only comes from a very sick mind – the danger we knew and should be wary about but to my surprise, not really even the majority of us worry about.

Perhaps only through FP.com where this “other” story is read, alongside with the published stories of the mentally disturbed, which would eventually trigger a balance of public awareness towards the danger we face behind the cry of freedom on one hand, and on the other hand, the Government’s propensity to squeeze that cry for freedom out of our throat.

So you think 1 out of 17 Americans should be locked up? Ooooops, too late you got your wish.

So you think 1 out of 17 Americans accused by somebody who likely has their own mental problems and pursued a psych degree to cure themselves should be able to order someone locked away?  For the good of all?

7 Comments in Response to Out Of The Straitjacket

Oh, wow! Yet another JV alias! Where will it end? (chuckle)

Ernie’s “editor” complains about this eye-opening letter to the editor – and what surprised me is that he got it ALL WRONG. [Note: His is quoted, and my response is in normal Times New Roman text]:

Gammill cynically asked: “So you think 1 out of 17 Americans accused by somebody who likely has their own mental problems and pursued a psych degree to cure themselves should be able to order someone locked away? For the good of all?”

No, Gammill, you got it all wrong. I did not “think 1 out of 17 Americans [is] accused by somebody …” to be a Kook. It is NOT what I think, but it is what YOU think. I am much too good – too intellectually advance -- to think the way you do.

Besides, you must know [obviously you don’t know and you should have checked it out to be able to know as what editors are expected to do] that this is the result of the study released by the National Institute of Health. I repeatedly said so in my Letter to the Editor.

Ernie, out of respect I am sorry to say this to you that I have never met an editor so bunkered behind his desk he turned out to be so uselessly unknowledgeable! [Nothing personal – just stating the obvious…and I do apologize if it sounds offensive.]

Furthermore, those who pursue a “psych degree” do not do it to “cure themselves” which editor Gammill childishly imagined, but to cure others with a mental problem which probably what he have.

Finally, those who have a “psych degree” do not give the order to lock up dangerous killers with a psychotic problem like what Gammill just foolishly insinuated… only mental health authorities give that order FOR THE SAFETY OF EVERYBODY. Again, how can an editor be so unknowledgeable stunned me.

No offense intended, but the truth is, I can hardly believe that Gammill’s elementary thought process works so poorly this way… so impaired by anti-Government hate and frustrations it does not anymore work properly or function normally. We in the Psychosomatic Science profession might be able to help.

The cerebral irony of this NIH study is that the mentally disturbed hated the State and the Government so badly they flipped over; they all wanted to kill the people in the Government when their only hope is the State, the Government and the people in the government who save them from immediate death …say, from the lynching crowd for the murders they have committed – that angry mob who just want to put a rope around their neck and hang them right away until dead! Of course the Government has its own way of “punishing” them for their crimes as a form of retributive justice society needs, but some of them who no longer have the right to live, like Charles Manson, still live.

To me it looks like Gammill is back to his distortion problem when angered. I read this article word for word. This 1 out of 17 Americans was not accused "by somebody" of having a mental problem. It is a result of a "scientific" study released by the National Institute of Health. Gammill's mental eyeglasses needs a new 20-20 prescription of vision. He couldn't see correctly... he could not see a damn thing right before his eyes.

This excellent piece should warn the public. Editor Gammill feels as if he is alluded to as 1 out of 17 Americans with mental disorder. Do you think that "face" in the picture looks like that of the angry editor?

Powell Gammill’s comment: So you think 1 out of 17 Americans should be locked up?

If you are 1 out of 17 Americans in the company of Charles Manson and the rest of the mentally disturbed killers roaming around without your straitjacket, thereby posing a great danger to me and the rest of Americans -- WHY SHOULDN’T YOU BE LOCKED UP?

Letters to the Editor • Currencies