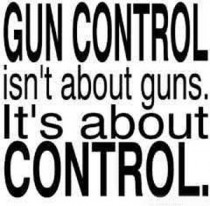 (Publisher: Notes from a friends)

As I have pointed out in the past, national id = gun registration.  Now here we go.
According to the pool report, Biden said that there were some recommendations that had come up repeatedly in this meetings with different groups — closing the so-called "gun show loophole" and instituting universal background checks. He also mentioned a possible limit on high-capacity magazines, as well as improving the "ability of any federal agency to do research on gun violence."

This means retaining instachecks.  Since your id is linked to your DL and Arizona dumps your DL info over to Homeland Security, now digital national id file will contain your instacheck records and, likely if they enhance it further, digital 4473s, not only identifying that you bought something.
Every nation that confiscated guns, before they registered them (which is what I described above is - registration) had to first roll out a national id scheme.

All pro2am orgs *must* oppose national id.  If we already have them as we do now in AZ, then pro2am orgs must work on dismantling the state data feeds containing the needed unique identifiers from going to the feds.

Ernie,
Well, the round up of the usual suspects has started.

Take note of this curious little detail from the article;...

The Camden County Prosecutor's Office says 46-year-old Gregory Gawrysiak was arrested Thursday at his home in Haddon Township and charged with unlawful possession of a weapon, possession of an assault firearm, and possession of a defaced gun.

Gawrysiak forfeited a gun and gave up his right to own weapons in 2010 after threatening to kill law enforcement officers, authorities say.

Authorities say the man is a member of the Sovereign Citizen Movement, which argues that state and federal governments lack authority.

So do they mean by "last year" just a couple weeks ago, or many moons ago? It sounds as if the White House has given the order to move forward with prosecutions, investigations and information against any militia types immediately.

Ridiculously paranoid and overly concerned.  They didn't seize anyone's guns in England or Australia after they got national ID and licenses and permits and registered their guns, did they? So trust your government, because if you can't whom can you really trust?  :-)