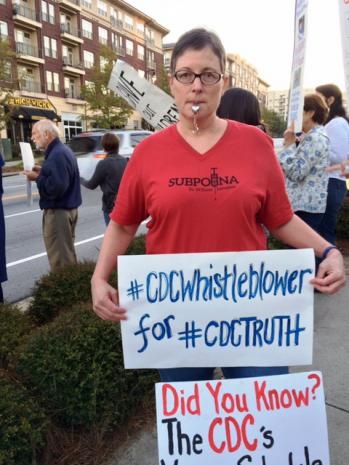 I am currently reading the Federal Register article on the CDC's proposed measures for "Control of Communicable Diseases."

The CDC is lumping MEASLES in with Ebola.

If you have seen the outrage over Colin Kaepernick refusing to stand during the national anthem, and you don't think he has reason to protest the actions of the United States, you need to read this article. The United States government is rapidly surpassing Hitler in their oppressive and illegal use of force against citizens who refuse to inject themselves or their children with experimental vaccines that have never been tested for carcinogenic or mutagenic effects, or for impairment of fertility.

Our government is so financially invested in vaccines that they are passing rules and regulations to take away your BASIC HUMAN RIGHTS to say NO to forced vaccination - for what is a mild, childhood infection, and for which the death rate in the United States had decreased nearly 100% BEFORE the vaccine was even invented.

If this regulation passes, entire cities could be under forced quarantine and citizens lined up and vaccinated under government force - whenever there is a case of suspected measles identified. That means this will be happening routinely - and especially at the beginning of every school year when recently vaccinated children are spreading measles to their classmates.

Melissa Sfura has put out a very important ACTION ALERT - which I fully support and hope you will attend to.
This is NOT A JOKE.
If you value your liberty and the principles on which the United States was founded, you had better get active NOW and work to protect them.

Alright, so the CDC wants to Round up citizens and force vaccinate them without medical testing, just because they think they can. See the proposed regulation here:
http://www.regulations.gov/document?D=CDC-2016-0068-0001

Did a Vaccine Experiment on U.S. Soldiers Cause the "Spanish Flu"?

HERE ARE SOME PDF DOCUMENTS FROM DR JUDY MIKOVITS FOR REVIEW:

Coronavirus, Vaccines and the Gates Foundation