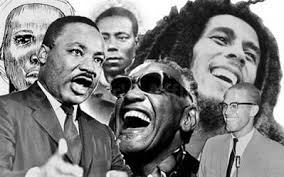 The very worst representation of black people most white people see on television is MTV.  Tune in to MTV's music video channel and you'll see black people depicted as a bunch of people acting like sexually depraved, drug-addled animals.  Many of their, "songs", are ugly and offensive to rational and normal Human Beings (including a lot of black people themselves) with messages like, "kill the pigs", "beat the ho", and other such garbage.  They celebrate the Gangsta image as if it is the definition of the black culture, when it is not, but if you watch and can stomach MTV long enough, you might very well come away thinking all black people are like that.

Whose fault is that?

But here's the problem:  Not once have I ever heard a black celebrity or black leader condemn MTV for depicting all black people that way.  Why is that?  Are black people incapable or just inhibited from being critical if the subject is black-related no matter how bad it depicts them to the general public?  Don't they understand how much damage MTV does to race relations?  Don't they care?

I'm sick of hearing what Black Lives Matter wants.  They want this, they demand that, but not once have I heard them engage any kind of critical introspection, unless it is from an Uncle Tom-branded black person who sounds and acts like a decent Human Being, and then every attempt is made to shout them down by other, loser black people.

We should all be turning the tables on Black Lives Matter by demanding they do something about their own problems.  White people, even low-life racists, are not and cannot hold black people down in a free society.  The only thing that can hold anyone back in this society is their own negative, self-defeatist attitude.  For example, if black lives really matter to them, then do something about the gang culture in Chicago that results in the almost daily murders of black people there.  If BLM actually cares about their own people, how come they will never condemn the worst affliction of their culture, that being their Matriarchal Society where black mothers are raising their children without the benefit of a solid male provider who has a job and goes to work every day?  And they wonder why their kids end up as dead gangsters?

Instead of taking a knee, it is high-time we confront BLM and any similar group with the ugly truth that slavery was over 200 years ago, that institutional racism no longer exists in the United States today and can no longer be used as their excuse.  Just because a person is black does not make them immune to the criticism their culture so richly deserves.  It wouldn't matter if every racist in America were eliminated:  If the black culture isn't changed by black people themselves, nobody is going to do it for them.

The ball is in their court, not ours.

Parents line up to slam woke Michigan school board member for saying 'whiteness is evil' ...