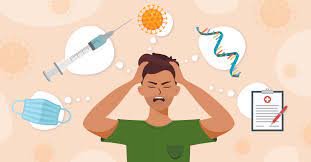 SENT IN FROM A READER OF FREEDOM'S PHOENIX...

Yesterday I was walking on the sidewalk in my neighbourhood and overheard a Brit talking to a woman friend (on speakerphone) walking behind me. It was clear from their convo that, because they have a mutual friend who was recently hospitalized due to the vaccine, they were both anxious about getting it; the man said he'd made his first appointment for next week("but now I'm worried") and the woman said she had her second shot appointment coming up soon but now was also scared.

I couldn't restrain myself, and so I interrupted and asked if he knew that the shots are still in clinical safety trials not scheduled to end until 2023 and that they are not yet FDA approved.
He answered that did not know that. Then I gave him a quick summary of the age/health/weight demographics of the folks who've (allegedly) died from the virus and told him that his health is his responsibility and that he's not responsible for someone else's health. He was in in 40s and ostensibly healthy so I told him that he has magnitudes more risk of dying from the flu.  And I pointed him to the Perspectives On The Pandemic series by John Kirby (link to it in the following text).

He and his friend (she spoke with me over the speaker phone) seemed genuinely interested and grateful.

Before we parted ways he said:
"Now I'm really afraid."
I knew what he was referring to but still I responded "You've nothing to be afraid of."
To which he responded "I'm not afraid of the virus, but of the vaccine."
To which i said "You should be."

Later I thought "What are the chances of hearing such a convo in passing on the street?" Until it struck me that perhaps these kinds of convos are not nearly as rare as one might suppose . . .

Bill Gates, Who Is Not a Doctor or Scientist, Recommends a COVID Vax Every 6 Months

The Pfizer Documents: What Is Pfizer Really Up To?

They Don't Need Your Guns If They Have Your Children

Must See Video: 5G Waves and Your Mind