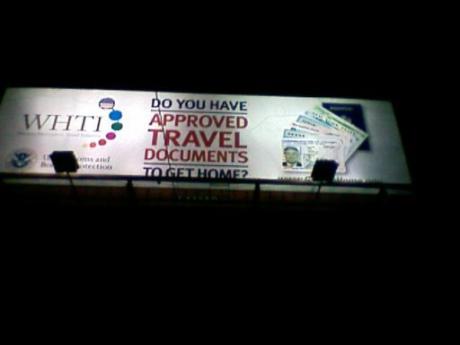 
Are we there yet?

Typical government! We are in the Matrix, knowing everyone around is are not the same people that lived in the Days of our Founding Fathers. Human Conditioning has changed and blinded the So called American people today. All they care about is their material items and play. The Great Diversion is what I call it. The Rat Trap! I believe the great majority of Americans will give up their liberty for material living. That day will come and if they are smart, just maybe all this will go away. I kinda doubt it per the Earth is the Devils Dominion.

wow the billboard takes the cake. and to think that the government constructed it with our money they stole from us in the first place.

Often there are "Mine Canaries" that go off and make headlines. This has the effect of announcing that something is wrong and should be paid attention to. But it is all about a risk benefit analysis that each of us must assess for ourselves,... as individuals.

But what is always interesting to me is how predictable it is that from out of the blue there is such a comment like this,.. on a site 'kind'a' like this.

There are millions of human beings across the globe that are regularly motivated to demand justice in various ways,... often creative ways. But I don't know a single person worth anything that would follow anyone that hasn't "charged the front lines of the bad guys" themselves,... and even then, that only got some attention. Then the long process of evaluation is done by each of us.

Then we each individually decide if that person and/or action deserves our support.

So I hope you can understand how out of place such a comment is to most of us.

When the time is right, "nothing in the 'verse will stop us".

To think it cannot get any worse is false. When dead bodies are laying everywhere and people are being hung at random like the Nazi's did in retaliations it will be getting close to worse but for brain dead Americans when it finally does get to the "worse" part it will be the bloodiest episode of human history ever recorded and deservingly so. There are no more words to describe what has been done to the sheep and what they will now tolerate. Americans have no limits on how much tyranny they will put up with. As I always say.....this is America and the government can torture, maim and slaughter to it's black hearts content and they will have nothing to worry about becuase Americans will not even bat an eye let alone acknowlage that the evil even exists. It is actually quite simple.....we are done as a nation. The end. The bravest among us will be able to commit suicide but the rest of us cowards will just have to suffer the evil that permeates the land. I will keep hoping for death to free me from this sick existence among a people made so animalistic and ignorant that that there are now no limits on how much human suffering and misery they will tolerate. Every morning I open my eyes it will be another day in a human created hell that just goes on and on. At least I can find hope in the fact that humanity is a soon to be extinct species and the universe will be safe once the last human breathes his last breath.