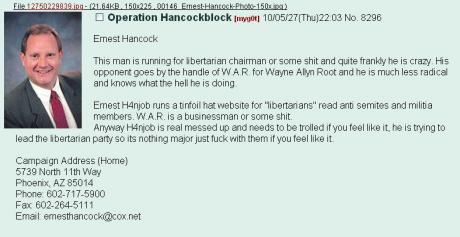 Could this be a ploy by the powers of W.A.R.?

Or perhaps some cruel joke gone wrong. Who knows(hint i know). Chances are this wont go anywhere but its out there now so if this gains any momentum that will be just fine.

7 Comments in Response to Operation Hancockblock?

Whoa now why would you call me a twad?

Thats just nasty man eww. But really this is funny imagine if i had put some real time and effort into some of the things I do, i would be unstoppable people would read my stuff and laugh, and if I got banned they would cry and protest and march for my return, ok not really but still im getting better at this stuff right?

With a deep breath, another thing that will get me banned.

I almost died with laughter with this one. OMFG. A series of zingers, perfectly timed, one after another, a setup, a combination, a knockdown with a happy ending, OMFG, all contestants emerge victorious, everybody wins.

The troll self-depricated himself in front of his osensible audience, rendering his criticisms neutral while his most hostile effect, that of "publishing" Ernie's home addres, which Ernie has ALWAYS, ALWAYS, ALWAYS made public is similarly toothless?

Brothers and sisters, what we are up against is a Coyote. A pretty balsy one. It cannot be dismissed.

Now I have queried this Coyote sufficient to know. One way you can tell a Coyote is to try to make friends with them. I have tried, and Coyote could hear a song and this one said it brough a tear to his eye.

OK, that just means I can speak Coyote. They cry all the time. But this does not mean we are friends.

Some people question to me privately about the credentials of this Coyote. And I say it is the real thing. Some words have passed. Some things, some words that mean different things from what people now talk about. There are certain things we know.

I am Bear. Coyote is a pain in the ass. But as I see now, Coyote people will outlast the Bear and then their mocking laughter might be all that is left of us.

(dude we are so getting banned you jerk but that last thing you did destroyed me with laughter, you freaking twad, I am still laughing, man 15 zingers packed into 20 lines, more zingers per letter than anything I have done ever in my life you dunk-head)

Yes the source or "sauce" is the same jacka** that pretty much rickrolled you guys and got away with it for about three hours before someone noticed my news link went to a message from anonymous. That guy makes me so mad.....oh wait.

It came to me when i hadnt slept in almost 24 hours the word Hancockblock just sounded funny.

Earnie is as pure a libertarian as they come, or some shit.