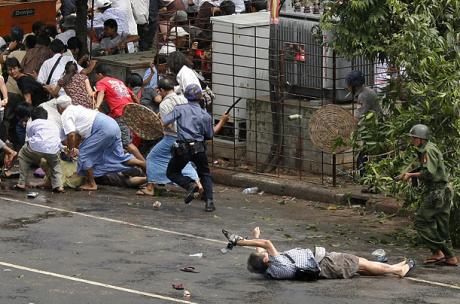 Ernest Hancock
The Chinese and Berlin Walls are and were borders erected by fascist rulers, often times supported by their own people that came back to haunt the very Citizens they were intended to protect. Be careful what you wish for.
If you think about it, since when has the government of any country been able to stop people from leaving/emigration or entering/immigration, a country? They have tried throughout history, unsuccessfully, to stop people from living where they want and they do so more for political reasons then not.  People have tried swimming or rafting across the Florida Straits, a 90 mile shark infested, treacherous, life risking journey to gain freedom and we think that we can stop people from living where they desire?  Do you not understand that the Citizens of the Germany tore down the Berlin Wall for a very important reason;   Liberty and Freedom?
I understand it’s a Catch 22 for those of you impacted by immigration. The additional costs to enforce immigration policies cause an increase in government expenditures and therefore an increase in taxes necessary to pay for the enforcement.  It is excessive taxation that causes businesses to lay off more people or hire cheaper labor which creates a desire for low wage earners from one country to immigrate to higher wage countries.  Literally, by increasing the enforcement of immigration, you are encouraging more immigration and historically tax and spend policies just encourage the process and increase hostilities between the various groups effected.  With less taxation and less government, businesses would be able to hire more people and be able to handle the influx of immigrants.  They would be able to hire the cheaper labor while still maintaining all their existing employees.  It's called full employment and this can only exist in a low or minimal taxation environment and that is where we should be focusing our efforts.
If you think about it, it is our tax and spend, redistribution of wealth policies that have created an almost impossible business environment for many and creates both an unemployment problem and the immigration problems.  Additionally, how many people are immigrating to the U.S. to gain the many benefits that are garnered by being here? People come here from various countries just to have their babies, knowing that they can get free services that we the tax payers must pay for. You want welfare, but welfare encourages illegal immigration and the necessity to increase taxes. Increased taxes hurt the business environment that causes them to hire cheaper labor, close down or move to remain profitable.  Have you not seen the number of business bankruptcies in this country over the last 10-20 years?  DO THE MATH!!!! The problems is excessive taxation not immigation policy.
There are a couple of old saying for liberty.  If you want all your liberties, you must be willing to extend those liberties to your neighbors and that means the people from neighboring countries, as well as your next door neighbors.  The best period in world history that provided the best quality of life for the largest majority, was the 19th Century, when people had the greatest level of individual rights after America showed the world what liberty was all about.  Two primary inalienable rights existed.  Free immigration/emigration and free trade were prominent principles around the world.  People could go most anywhere in the world they wanted without having to gain consent or permission from the various governments.   They could trade and travel freely around the world without or very minimal taxation or tariffs and that created, my friends, the industrial revolution that has now for all intent and purposes been stagnated for the majority of people by over taxation and regulation.
People miscomprehend regulatory benefits and the necessary taxation required for enforcement.  The basic premise of law is to protect individuals and property from harm.  A good judicial system is supposed to accomplish that.  Since our government run judicial system has not accomplished that, politicians keep calling for more and more regulation, only to call for more regulatory reforms when those fail.  It is the poor judicial system that needs to be fixed, which will eliminate the need for most regulatory policies and continued reforming of something that just doesn’t ever seem to work, which will all decrease the need for taxation.  http://hskiprob.wordpress.com

There is an old saying that without justice you cannot have peace.  When you think about it, incidences like the Salem Witch hunts or the Spanish Inquisition would not have occurs, if the government controlled judiciaries were not corrupt and in collusion with government.

As our world has seen and experienced throughout its history, it is very easy for the Police Power of government to be abused for power, privilege and money.   The protection of Inalienable Rights is an integral part of a system that constrains police power and actually promotes peace and prosperity. The right to travel to and live in the location where you want, as long as you do not take away the rights of those inhabitants, “Immigration and emigration” are inalienable rights.

The thought that government can enforce immigration/emigration policies is an erroneous, poorly thought out philosophy that has never worked yet politicians (The Lying Bastards) will inevitably call for some form of Police Power to make themselves look tough in front for all their weak minded constituents that believe government can actually regulate and enforce such a policy. Of course there are also those sociopaths affected by immigration who don’t care if their fellow Citizens pay to much in taxes, or if immigrants have a decent place to live and work, but we can just ignore those big mouth buffoons.