Freedom Law School's 2012 Freedom Rally - March 16-19 - Crowne Plaza Hotel - Irvine, CA
03-01-2012  •  www.freedomlawconference.org
This 4-day event includes an in depth class on Avoiding and Defeating IRS Criminal Charges, two keynote banquet speakers, 14 of the most exciting Freedom speakers in the country, and a seminar on Stopping Mortgage Fraud.
Hour 2
Steve Neil
Talks about the minting of the Arizona Centennial Commemorative Medallions and all the issues surrounding the state's non-compliance of such a simple law. See below for information and details:

The other major problem is that these coins DO NOT comply with the law by having the weight of the coin on the face...
"shall have the... ...weight of the disk in fractions of troy ounces or grams"

They used the same dimensions for Gold, Silver and Copper (different densities... can't be the same size for the same weight) so they used the same 'Die' to make all three medallions. Please listen to the last 2 segments (last 20 minutes of 3 hour show today MP3 http://www.freedomsphoenix.com/Media/105143-2012-02-14-february-14th-2012-happy-birthday-arizona-listen-live-m-f.htm / for the video Start at 28 mins. and you can see the video of me showing the different medallions http://www.youtube.com/watch?feature=player_embedded&v=_1o8yXPbtAc#! )

Ernest, Thanks for the heads up on this, and the work getting it into law. As a result of reading your Friday article, I headed down there Saturday afternoon and picked up some medallions. Your article has a link to a pdf that is not the adopted law (engrossed version). And that original language was amended this part April '11 to this:
C. The historical advisory commission shall design, produce and sell commemorative 99.9 per cent pure gold, silver and copper medallions, with weights that do not exceed one troy ounce. The medallions shall be two-sided disks of not more than five millimeters in thickness, shall have the seal of the state of Arizona struck on one side and shall have a representation of the Arizona state flag struck on the other side along with the text "Arizona centennial medallion – February 14, 1912 – 2012" and the weight of the disk in fractions of troy ounces or grams. The department of weights and measures shall certify the weight and purity of the centennial medallions. The historical advisory commission shall negotiate the manufacture and sale, which may include a prepayment requirement for purchase, of the centennial medallions. The sale price of the medallions shall not be more than ten per cent higher than the manufacturing cost of the medallions or ten per cent higher than the current value of the gold, silver or copper, whichever is greater. Manufacturing quantity shall be produced to meet ongoing prepaid public demand. Proceeds from the sale of centennial medallions shall be deposited in a separate account of the state library fund pursuant to section 41-1336, arizona revised statutes, and used by the Arizona historical advisory commission to fund centennial legacy projects and activities. If there are any remaining unexpended funds after the Arizona historical advisory commission funds and maintains the centennial legacy projects, the remaining funds shall be deposited in the state general fund.
Changes were: 1. allowed to take prepayments 2. price to be greater of the cost + 10% or the current value of the metal + 10%. And I asked the commission members if they were charging tax, and they said that the prices included 9.3% tax that seemed wrong to me so I researched it and found that the original law's exemption had NOT been amended out. I pointed this out and they said they will be refunding me 9.3% of what I paid them.
Here is the statute: ARS 42-5061. Retail classification; definitions A. The retail classification is comprised of the business of selling tangible personal property at retail. The tax base for the retail classification is the gross proceeds of sales or gross income derived from the business. The tax imposed on the retail classification does not apply to the gross proceeds of sales or gross income from: (and skipping down inside A to 54.) 54. Through August 31, 2014, sales of Arizona centennial medallions by the historical advisory commission. SO, prices should be coming down 9.3% for everybody! --Steve


Arizona became a state on February 14, 1912. It was the last of the 48 contiguous states to be admitted to the union.

In 2005 the Governor of Arizona, Janet Napolitano, established a coordinating committee to honor Arizona's centennial in 2012. The mission of the organization is to:

Develop, encourage, and coordinate a statewide plan for Arizona’s centennial in 2012 including: advising the legislature and state agencies on centennial history and heritage, arts and culture; assisting the governor’s countdown to the centennial to support school children learning about Arizona’s history; and recommending activities and projects that will ensure lasting legacy accomplishments to commemorate the centennial. In 2004, House Speaker Jake Flake said, “The Centennial will be an unmatched opportunity to display to the rest of the country and the world the wonders of Arizona and its amazing heritage...." 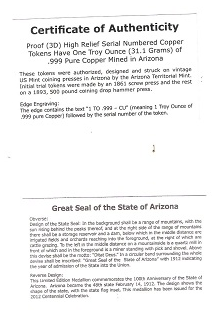 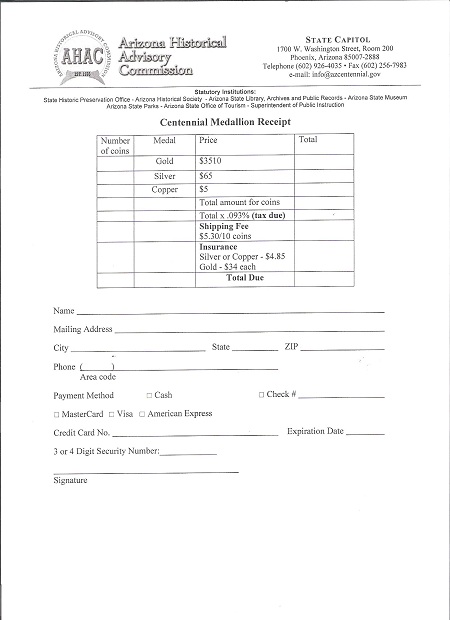 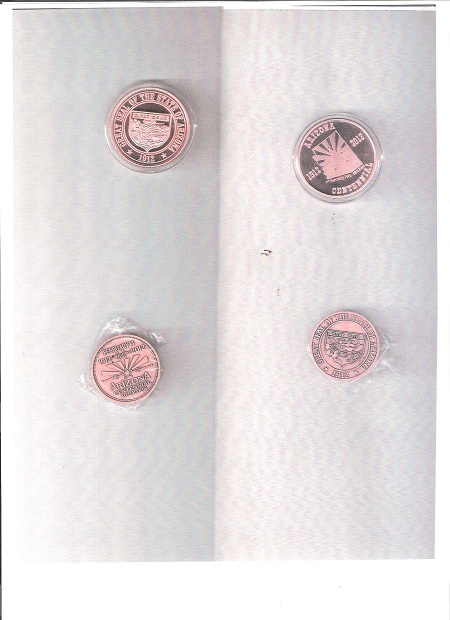 Page 19 Line 26+
I just got a call from retired Arizona State Senator Karen Johnson telling me that the 1 oz Medallions are in.
I called and talked to the lead man on the distribution and am waiting for more details. Jim Drake is the Assistant Secretary of State and will have the medallions available for sale at this weekend's Centennial Celebration at the Arizona State Capitol. The Secretary of State's office plans to have a 10' x 10' booth where they will make the 1oz medallions available.
The law states that the medallions must be produced in quantities to supply all public demand and cost no more than Cost + 10% (this is where they get funky).
They produced 1 Gold Coin - 250 Silver and 2000 Copper.
Jim Drake - Arizona Assistant Secretary of State...

The costs for the AHAC Centennial Medallions are as follows:
Copper      $5.00
Silver        $65.00
Gold         $3510.00 (This particular coin is this cost, because of the cost of gold at the time we had it minted.  Current orders will be likely be much less because of the recent decrease in the cost of bullion.)
There is a limit on purchase of coins, that are not prepaid.  Ten coins per family.  The order form will allow for unlimited purchase.
Here is the legislation that allows for prepayment:
http://www.azsos.gov/public_services/LegislativeFilings/PDFs/2011/50th_Legislature_1st_Regular_Session/CH_125.pdf


I hope that the State of Arizona will get a large "pre-Paid order" that will bring the cost down.... but then this is a 'government' thing.
This legislation was written by Powell Gammill, Ernest Hancock and Karen Johnson in January of 2007 in an effort to introduce precious metals to the people of Arizona.
Karen Johnson asked what could be done by a State Legislator to combat the destruction of the United States Dollar. This legislation was the result of that conversation with the Senator and her aide.
When we have a picture of the Medallion and more details we will share them. But I was asked not to buy all of the medallions so that they would have some for the events :)
More to come... this is just the beginning. We are very surprised that we got this far since the government has no idea what issues are at stake here. This was carefully maneuvered into existence with resistance from expected perches. The intended production of Gold, Silver and Copper to "supply all Public Demand" will be the test. More legislation may be needed.