Join-Us | Log-In
Freedom Forum | Translate
Rosa Koire (Executive Director of the Post Sustainability Institute, author of BEHIND THE GREEN MASK: UN Agenda 21, and blogger at her website DemocratsAgainstUNAgenda21.Com) on her fight to keep 'sustainable development' policies from being implemen

Hour 3 -- Rosa Koire (Executive Director of the Post Sustainability Institute, author of BEHIND THE GREEN MASK: UN Agenda 21, and blogger at her website DemocratsAgainstUNAgenda21.Com) on her fight to keep 'sustainable development' policies from being implemented.

Rosa Koire
Rosa, ASA, is the executive director of the Post Sustainability Institute and the author of BEHIND THE GREEN MASK: UN Agenda 21. She is a retired forensic commercial real estate appraiser specializing in eminent domain valuation. As a District Branch Chief at the California Department of Transportation her nearly 30 years analyzing land use and property value enabled her to recognize the planning revolution sweeping the country. While fighting to stop a huge redevelopment project in her city she researched the corporate, political, and financial interests behind it and found UN Agenda 21. Impacting every aspect of our lives, UN Agenda 21/Sustainable Development is a corporate manipulation using the Green Mask of environmental concern to forward a globalist plan. Rosa speaks across the world and is a regular blogger on her website Democrats Against UN Agenda 21 dot com.  Her book, BEHIND THE GREEN MASK: UN Agenda 21 is available on Amazon.com, Kindle, and Nook, and at her website.
Webpages:
DemocratsAgainstUSAgenda21.Com
PostSustainabilityInstitute.Org

NOT UNDER PLAN BAY AREA

PLAN BAY AREA violates the 5th Amendment of the US Constitution by taking property rights without just compensation.  By the creation of Priority Development Areas, this Plan restricts 80% of residential development and 66% of commercial development to just a few small areas of your city--until the year 2040. If your property is outside of the PDA (96% of property is outside) you will likely not be able to build or expand your building--and you won't be paid for this loss.

PLAN BAY AREA violates voter-approved Urban Growth Boundary ordinances.  Because the Priority Development Areas are within the UGBs but are much smaller restricted areas they are in violation of ordinances that clearly state that development must be encouraged out to the limits of city services: Urban Growth Boundaries. These ordinances are found throughout the Bay Area and cannot be changed without voter approval.

PLAN BAY AREA permanently strips all development rights from rural properties in the nine county Bay Area. Plan Bay Area is effectively taking conservation easements on all rural lands without paying for them.

PLAN BAY AREA restricts development rights of property within the Priority Development Areas, too. Construction will be limited to mixed-use high density Smart Growth development.  Existing buildings are likely to be out of compliance with your city's General Plan (legal non-conforming) and permits to make additions or changes will likely not be granted.

PLAN BAY AREA affects every property owner in the entire nine county 101 city Bay Area.  Only the 1% big developers with their connections to elected and appointed officials will take advantage of tax credits and subsidies.

The Post Sustainability Institute is a 501 c4 non-profit.  Donations are not tax deductible. All funds will be used for this lawsuit only.  www.PostSustainabilityInstitute.org
MAP OF BAY AREA (PDF), or see below: 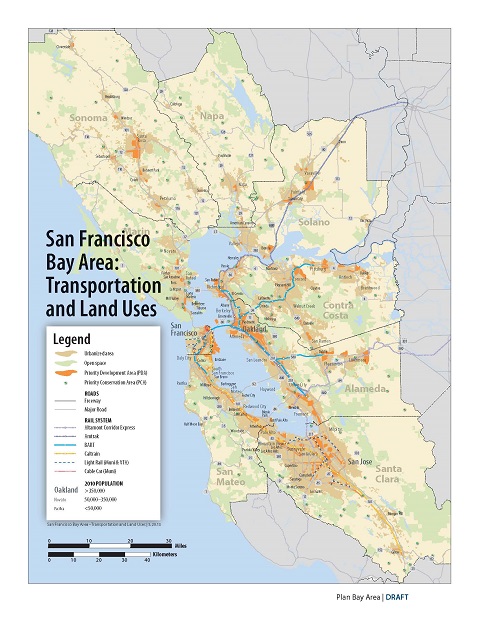 An Average Day in the Life of a Refugee

Robert Kennedy Jr.: "Pharmaceutical Drugs Are Now The 3rd Leading Cause of DEATH" In US