Hour 3 -- Warren Woodward on the danger of smart meters and how they violate health, privacy, property, safety, and cybersecurity 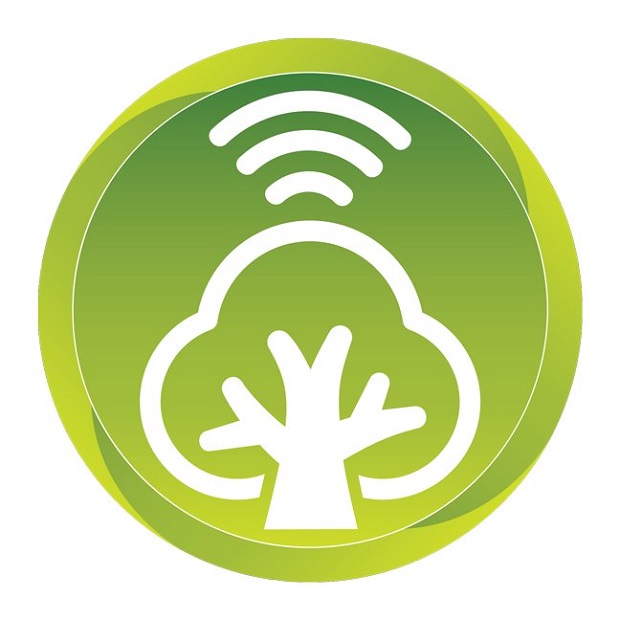 The Internet is more than a place to go shopping. Or a way of staying in touch with friends. The universal availability of information results in liberation. Regardless of whether you were born in New York, Shanghai or Cairo, access to the Internet can transform your life. The world is changing, becoming increasingly interconnected, and it's happening fast...

PUSHED TO THE LIMIT: Mobile Networks in the Era of Data

Skyrocketing consumption of mobile data is becoming curbed by a finite amount of licensed spectrum and the capacity limitations of cellular networks. Network operators must look beyond traditional mobile solutions to maximize revenues as data usage continues to ramp up.


Capacity and spectrum limitations can impact the user experience in very important – and very negative – ways. They can result in slower or incomplete downloads for content such as games or music, and video chat sessions that are intolerable due to poor quality or incessant buffering. They can produce inconsistent data services that leave consumers wondering when and where they can access the network, and how fast their connections will be. And they will make it that much more difficult for operators to deliver and maintain quality voice services over LTE – services that will begin to hit the U.S. market in 2013.

Open Garden leverages crowdsourcing to create seamless connectivity across 3G, 4G, Wi-Fi and Bluetooth. It enables users to create their own ad-hoc mesh networks with other Open Garden-enabled devices including smartphones, tablets and PCs. And it offers benefits for nearly every player in the mobile ecosystem: consumers, carriers. handset and tablet manufacturers.


Founded in 2011 by entrepreneur Micha Benoliel, Internet architect Stanislav Shalunov and developer Greg Hazel, Open Garden is a San Francisco-based start-up dedicated to making the mobile web fit for purpose. Open Garden's co-founders share a background in Internet infrastructure and peer-to-peer technology. In 2004-2005, Benoliel worked with Skype, negotiating the deals with European telcos that provided the basis for Skype In and Skype Out, the innovations which allowed Skype to begin generating significant revenue. Shalunov has spent much of his career working on Internet infrastructure, first at Internet2, the US academic networking consortium, then at the peer-to-peer filesharing service BitTorrent. It was at BitTorrent that Shalunov met Hazel, lead developer of the popular BitTorrent client uTorrent, used by more than 200 million peer-to-peer enthusiasts worldwide.


Open Garden Mesh app was launched in Beta on may 21st 2012 during TechCrunch Disrupt in New York city. When downloaded and installed on a smartphone, laptop, tablet or other compatible device, the app turns your hardware into a router. Working with similarly equipped devices within a range of approximately 20 meters, the Mesh App then discovers, shares and coordinates access to any available Internet offramp, optimizing your Internet access. By crowdsourcing connectivity, Open Garden enables you to connect to the mobile web more frequently and with better results.

Differentiation is Crucial in the Mobile Era

Open Garden’s technology provides an opportunity for carriers to address the shortcomings of cellular networks even as they deliver a superior experience for mobile data users. It enables faster, more efficient data transmissions without requiring users to manually sift through available networks to find the best one available. It minimizes network traffic without the use of data caps and network throttling, which consumers abhor. That’s great for consumers, of course, but it also gives carriers a chance to differentiate themselves in an extremely competitive market where a superior mobile experience requires much more than just cellular. In an era where capacity is at a premium and spectrum is severely limited, Open Garden provides a way to deliver more data to more devices through a superior user experience. And that means happier customers and increased revenues.

Also, they will have the AltExpo Tent at Porcfest this year to provide increased internet reliability for attendees

My name is Larken Rose, and you are most likely here because you have either heard about my research into the federal income tax, or you have heard about my political (or anti-political) rantings and/or books. Because the two issues are really separate, distinct issues, they are dealt with separately. So choose which path below you want. (Or you can go to the store, which has the books and other stuff having to do with both topics.)


History… Interview and a Movie: Larken Rose premieres the Director’s Cut of “It Can’t Happen Here!” Posted by Richard Grove of Tragedy And Hope
In America we’re taught to believe that Tyranny can’t happen here. What does Tyranny actually look like, and how does it grow? Larken Rose sets the stage so you can then enjoy his new documentary film “It Can’t Happen Here”, shown in a Director’s Cut format, unedited, and in HD. It’s a journey through history, you won’t likely forget!

I am retired and living in Sedona, mostly working on the fixer-upper house we bought here. Electric meters were the last thing on my mind when someone forwarded me a Jerry Day Youtube 2 years ago in which he outlined the privacy violations of some new kind of electric meter called a "smart" meter. I then poked around online and found that the entire Phoenix area had the meters and that they were headed our way. The information I found online was something out of science fiction, horrifying in every way, like a combination of science fiction and George Orwell. Health, privacy, property, safety, cybersecurity -- "smart" meters either violate or put those at risk. I spent literally the next 2 weeks researching night and day. Since then I have spent many more hours researching and have caught APS lying about almost every aspect of the meters. And I found that our state regulators are basically asleep on the job. They did no due diligence. They have ignored state statutes and even one of their own decisions.

Articles in the Sedona Eye (SedonaEye.Com)

Figure 1, which appears in NIST’s report on smart grid cybersecurity, shows how smart meter data could be used to decipher the activities of a home’s occupants by matching data on their electricity usage with known appliance load signatures.

[in case not displayed in this email copy, here is link to figure: http://www.dora.state.co.us/puc/DocketsDecisions/DocketFilings/09I-593EG/09I-593EG_Spring2009Report-SmartGridPrivacy.pdf] 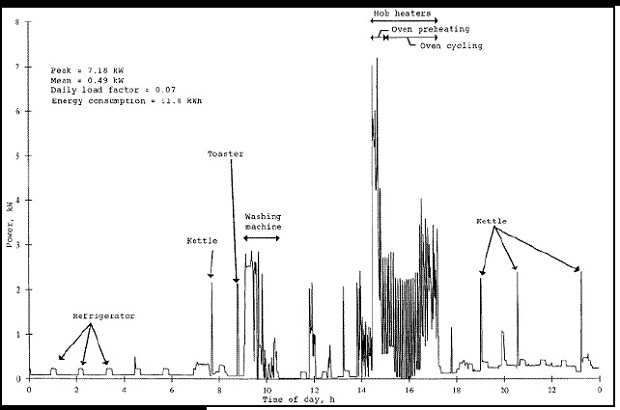 Pinnacle West, the APS parent company, political donations for 2012. Why should a regulated public monopoly be allowed to influence elections?

Republicans who beat their chests and bellow in defense of “private property”, “individual rights” and “rule of law”, where are you? Oh that's right, you comprise the entire ACC, have a majority in both legislative houses and hold the Governor's office. So why so quiet? Is it that G.O.P. soft spot for big business and big donors?

[link to money pie chart in case not displayed in this email copy: http://www.followthemoney.org/database/topcontributor.phtml?u=8481&y=2012&incy=0&ince=0&incs=0&incf=0 ]

Here is what the microwave measuring device that I use looks like: 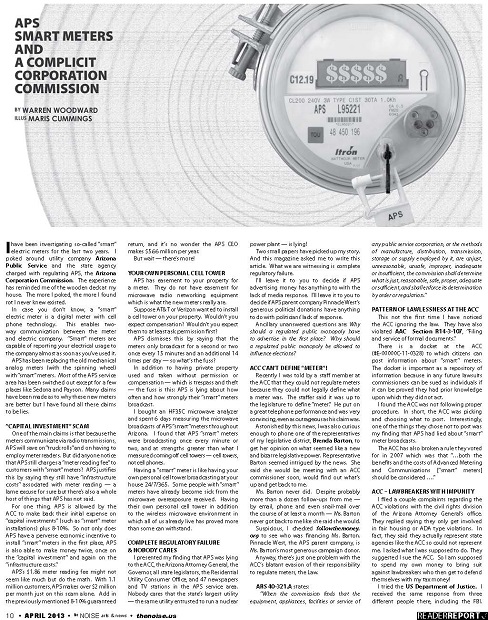 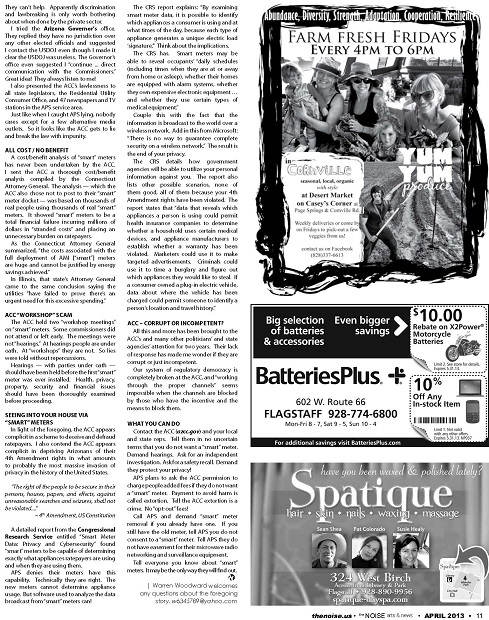