His writings can be seen in the Wall Street Journal, The Washington Times, and USA Today 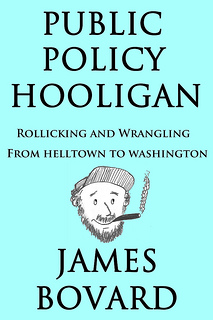 "Public Policy Hooligan is a unique American classic, an odd, wonderful road trip with a great writer, at once intensely personal but also hugely informing.... Bovard is not just a relentless, courageous investigative journalist, he is a wonderful writer with a scalding honesty and self-deprecating humour that makes PPH oddly laugh out loud and deeply touching. Burly, bearded, cigar chomping Bovard may be the last of his kind..." Paddy Manning, Irish writer and farmer

"Bovard's work has been officially condemned by the leaders of virtually every federal government agency and political hack of every stripe. They hate him simply for telling the truth about them. Now in Public Policy Hooligan we find out the truth about Jim: all the devotion to his craft and great adventures that made him the Leviathan Slayer that we all know and love today. It's really funny too." Radio host Scott Horton, KPFK Los Angeles and Antiwar.com

"Get it. Read it. Love it. Give it! Bovard at his best! From Farm Fiasco to Attention Deficit Democracy, no one jabs, pokes, slices, dices, points, kicks,laughs, infuriates the insanity of the System and the chuckleheads in it like Bovard. Learning the path he followed, the barbed wire, road gangs, government dingbats, good (and bad )beer and the women he partied with makes Public Policy Hooligan- to borrow the words of Larry King - A Great Read! Bravo Bovard!" Brian Wilson , talk show host legend

"Most of all, this biography is fun to read. Jim has a sharp sword but he wields it kindly. There is no bitterness - perhaps unusual given that Jim, like most friends of liberty, is dismayed about the steady erosion of our rights. The passion survives and Jim continues to fight. As he notes, he was impressed with the courage and steadfastness of the Confederates (without slipping into the apologetic for slavery that some accept). That willingness to fight on when the cause seems hopeless vibrates throughout his writing. That message is worth the price of the book alone." Fred Smith, Chairman and Founder, Competitive Enterprise Institute

"Jim Bovard has written an amazingly cheerful memoir of how he went from being a good, authority-respecting Boy Scout to being the bane of D.C. policymakers and bureaucrats. Jim didn't take the usual course to becoming a wonk. He didn't graduate from the Ivy League. In fact, he didn't graduate from anywhere; he dropped out. He didn't arise from an intellectual urban environment but from the rural South. He made his way to D.C. not via scholarships, internships, or political connections, but by hitchhiking, working on road gangs, and bumming around Europe." Claire Wolfe, Author and legendary freedom hell-raiser

"Bovard's memoir is fun and full of great remarks about life and about our rulers. For example, about life: "I learned to see minor hardships as transaction costs for great adventures." Bovard is politically astute: travelling through Eastern Europe in the 1980s, he saw, and wrote in the New York Times, that these countries were "much closer to economic collapse than most westerners realize." Chronicling his life, Bovard shows how many things that were innocent four decades ago are now matters of zero tolerance and criminal indictment. The author of Public Policy Hooligan is a great defender of our liberties (or what's left of them)." Pierre Lemieux, Economist, Professor, Author

Here are some other books by James that are available now on Amazon...