Join-Us | Log-In
Freedom Forum | Translate
Karen Hudes (World Bank Whistleblower) comes back on the show to provide an update on her fight to expose the corruption at the World Bank - Cindy deBac (EMF Doctors) talks about the dangers of smart meters, cell towers, etc...

Webpage: KAHudes.Net
Who is Karen Hudes?

Karen Hudes studied law at Yale Law School and economics at the University of Amsterdam. She worked in the US Export Import Bank of the US from 1980-1985 and in the Legal Department of the World Bank from 1986-2007. She established the Non Governmental Organization Committee of the International Law Section of the American Bar Association and the Committee on Multilateralism and the Accountability of International Organizations of the American Branch of the International Law Association.

What did Karen Hudes blow the whistle on?
From Activist Post:

Whistleblower Reveals World Bank Corruption
Whistleblowers continue to endure an increasing level of targeting and prosecution by an administration that touts its commitment to transparency. Despite this, many brave insiders continue to come forward to reveal the extent of corruption at the highest levels.

The latest information comes from Karen Hudes, seen in the video below with Sean Stone. Her bio highlights her 21-year experience at the World Bank as Senior Legal Counsel:

She worked in the US Export Import Bank of the US from 1980-1985 and in the Legal Department of the World Bank from 1986-2007. She established the Non Governmental Organization Committee of the International Law Section of the American Bar Association and the Committee on Multilateralism and the Accountability of International Organizations of the American Branch of the International Law Association.
The World Bank is already notorious for its wide range of human rights violations, land-grab schemes, environmental destruction and economic attacks on sovereign nations and local communities. Hudes offers some additional details about what she asserts is one single group controlling world financial markets and media. She also offers names of people who were involved in blackmail surrounding a 2007 prostitution scandal. Hudes has now been charged by Attorney General Eric Holder with trespassing after being arrested May 13th at an office of the World Bank.

It is worth noting that much of what Hudes discusses from her perspective shows the level of compartmentalization that takes place in large governmental organizations. For example, she states that she believes the World Bank is "finally fulfilling its mandate" by stopping the next world war. However, the deliberate destablization campaigns with subsequent destruction and reconstruction projects, as documented by other insiders such as John Perkins, call this idealistic view into serious question. Hudes maintains that it is exactly this type of corruption that is being rooted out, and why people like her are being targeted.
Regardless of one's view of the World Bank as an institution, Hudes' information highlights that there are people who get into this type of work with good intentions, believing the propaganda they have been given. At the very least, her assertion that there is a network of insiders that will continue blowing the whistle about World Bank corruption bears watching. Lastly, it is worth noting her comments on the possibility of martial law in America and the steps being taken to avoid it. Time will tell.

What is going on: the whole world is bringing the gold that was hidden in Indonesia and the Philippines during World War II out of the ground.  The Chinese bankers are in charge of this. http://www.courthousenews.com/2011/12/05/41930.htm These Chinese bankers are now poised to reset the US dollar using this gold, and they want to take over the government of our country, which has been weakened, corrupted, and compromised by the owners of the Federal Reserve.

We are facing martial law because we have not done what Hungary did: kick out the Federal Reserve and the Bank for International Settlements.  http://the-tap.blogspot.com/2013/08/hungary-issues-debt-free-money.html

Look at page 16 of this http://kahudes.net/wp-content/uploads/2012/05/board-of-governors.pdf  The man at the US Treasury whom I wrote about the corruption at the World Bank was also involved in removing Ferdinand Marcos’ heirs, and appointing the UN to oversee gold that was buried in the Philippines during World War II.  See pages 14 and 15  http://www.scribd.com/doc/157112633/Social-Justice-Doctrine-the-New-World-Order-and-Operation-Heavy-Freedom

and look at the study at the bottom of my letter to Chief Justice Roberts: http://kahudes.net/wp-content/uploads/2013/01/ljudicialconference1.pdf

I described this problem in this article: http://www.larsschall.com/2013/05/08/governance-issues-at-the-world-bank-a-security-risk-to-the-world-order/ 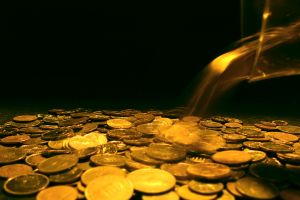 Worldwide, an incredible tower of debt has been under construction since 1971, when President Nixon defaulted on the gold obligations of the US government. His decree severed the redeemability of the dollar for gold and thus eliminated the extinguisher of debt. Debt has been growing exponentially everywhere since then. Debt is backed with debt, based on debt, dependent on debt, and leveraged with yet more debt. For example, today it is possible to buy a bond (i.e. lend money) on margin (i.e. with borrowed money).

The time is now fast approaching when all debt will be defaulted. In our perverse monetary system, one party’s debt is another’s “money”. A debtor’s default will impact the creditor (who is usually also a debtor to yet other creditors), causing him to default, and so on. When this begins in earnest, it will wipe out the banking system and thus everyone’s “money”. The paper currencies will not survive this. We are seeing the early edges of it now in the euro, and it’s anyone’s guess when it will happen in Japan, though it seems long overdue already. Last of all, it will come to the USA.

The purpose of this article is to present the early warning signal and explain the actual mechanism to these events. Contrary to popular belief, it will not be that the central banks increase the quantity of money to infinity. The money supply may even be contracting (which is what I expect).

To understand the terminal stages of the monetary system’s fatal disease, we must understand gold.

First, let me introduce a key concept. Most traders define “backwardation” for a commodity as when the price of a futures contract is lower than the price of the same good in the spot market.

In every market, there are always two prices for a good: the bid and the ask. To sell a good, one must take the bid. And likewise, to buy the good one must pay the ask. In backwardation, one can sell a physical good for cash and simultaneously buy a futures contract, and make a profit on the arbitrage. Note that in doing this trade, one’s position does not change in the end. One begins with a certain amount of the good and ends (upon maturity of the contract) with that same amount of the good.

Cindy is very intuitive she has studied Quantum physics and vibrational medicine for over 19 years. She has studied Nikola Tesla's technologies and zero point energy and scalar wave . She has been a activist  for over 1 yr and 8 months with the Smart meters and the 4 G cell phones and towers, has been on Fox news, and spoke 3 times to educate and give awareness about digital pulse micowave radiation from Smart Meters, the 4 G smart phones, and cell phone tower network  to the Arizona Homeopathic Integrative Medical Association . Doctors send there patience to Cindy and she helps them from Mild to sever cases of EMF (Electromagnetic Frequency) and EMR radiation (Electromagnetic Radiation) and clients world wide .
About EMFDoctors

Our Mission is to bring you the highest quality Products to measure, remediate, and block the ubiquitious signals in our lives and bring the body to optimum health.

Be Aware of your Environment, Surroundings, & and most importantly, your own Body.
You are in control of your own reactions, and how you respond and act. Your mind is a strong transceiver in and of itself and a very powerful overriding tool. Direct it away from the hypnosis of false culture and technocracy, and Ground in nature and what is real, solution oriented, and positively energetic!

Fox 10 News in Phoenix forgot to say that Cindy duBac & Loni cannot live in their homes because of the Smart Meter Grid and 4 G Cell Towers producing high levels of radiation. APS will not remove them in her community so she can go back home to live .Also a separate cardiologist was interviewed and they did not include his testimony in this video. Will add that interview at a later date. The representative from the power co in this video cites incorrect data about the power levels of the smart meters.


The Body Electric: Electromagnetism and the Foundation of Life -
Available on Amazon Now: