Hour 2 -- Sarah Blincoe (Project Manager of The Bit Drop) comes on the show to help promote The Bit Drop project that will send Bitcoin via SMS texting to every resident on Dominica, a Caribbean commonwealth island on March 14th, 2014

Hour 3 -- Charles Goyette (Author) on Obama's drumbeat for war with Syria. Also, Scotland's rejection of Independence from the U.K.; Bob Anderson (Local activist) stops by the studio and sits in on the discussion

World News
Scotland rejects independence
09-18-2014  •  BBC News
Scotland will vote to stay in the United Kingdom after rejecting independence. With 29 out of the country's 32 council areas having declared after Thursday's vote, the "No" side has 55% of the vote, with the "Yes" campaign on 45%.

The controversial "Six Californias" initiative has failed to make it onto the 2016 ballot, the Secretary of State's Office said Friday.

According to the Secretary of State's Office, the initiative simply did not have enough valid signatures when they completed the standard random sampling of petition signatures.

The plan, backed by venture capitalist Tim Draper, was to split California into six smaller states. He says the state is too large to govern efficiently.

One of the states would have been Silicon Valley, which included wealthy San Francisco and San Jose.

Sometimes people decide they cannot secure their rights within the framework of an existing polity, and must separate from it. Sometimes they live in an occupied country, and the occupying power has no intention of extending the full rights of citizenship to them, or of complying with constitutional principles. We generally favor enforcing constitutional compliance within an existing polity, but sometimes independence is the only way. We distinguish them from Freedom Movements and Republican Movements. The following are links to some movements of this kind. Inclusion does not indicate approval or support, only relevance.

Project Manager for The Bit Drop 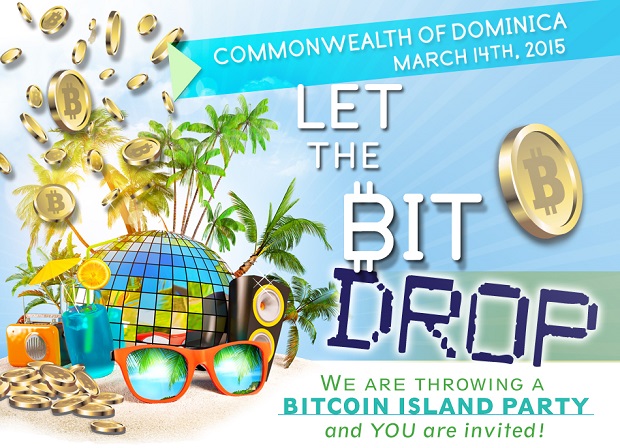 WE ARE LOOKING FOR SPONSORS TO:

To learn more about the different levels of sponsorship, contact The Bit Drop.
Email: info@letthebitdrop.com

We hope to see you there!

On March 14th 2015
at 9:26 am, in coincidence with Piday, we are throwing a full-island party called The Bit Drop for an entire nation in the Caribbean. The Bit Drop project will send Bitcoin via SMS texting to every resident on Dominica, a Caribbean commonwealth island with a population of over 70,000... thus creating the world's largest and highest density Bitcoin community.

Each islander will own Bitcoin and celebrate in style with well-known surprise musical artists who support Bitcoin, fire dancers, sponsored tropical island spirits, free giveaways, and full bitcoin education booths during the event.

Pack your board-shorts or Bikini because YOU have a chance to WIN an ALL-inclusive trip to the island by donating 0.1 BTC today. Our goal is to create the world's largest and highest density Bitcoin community on the planet. One lucky winner will receive airfare, lodging and this incredible Caribbean party! Don't have 0.1 BTC to donate? No worries, even the smallest donations will make an impact for this project. All supporters will be linked to a live feed featuring the event, musical artists and more opportunities to win free giveaways!

The Bit Drop is working with full cooperation and support of the island's government. By partnering with the Dominica's elected leaders, Aspen Assurance and Coinapult, The Bit Drop will give each islander a small amount of Bitcoin. Before the party, we plan to distribute educational materials via government channels on Bitcoin and the "Bit Drop" project. We will create local information centers to educate people about Bitcoin and how to use their new digital wallets and then celebrate in style during the island's holiday season.

Is your company interested in global exposure and reaching a new demographic of Bitcoiners?
Please contact us today to learn about our sponsorship packages for this event.

WIN an ALL-inclusive Trip
by following these 4 simple steps.

3. Tweet @TheBitDrop the reason you should win the trip with #WinBitDropTrip

4. Email win@letthebitdrop.com with your sending address of donation & your twitter handle

HERE IS MORE INFORMATION ON THE TOPICS DISCUSSED...

Obama's drumbeat for war with Syria

Bob Anderson (Local Activist) drops by the studio and sits in on the discussion...