Join-Us | Log-In
Freedom Forum | Translate
Bill Buppert (Publisher of ZeroGov.Com) comes in studio for 3 hours to discuss the current American police state, the loss of our civil liberties, and a host of other freedom and liberty issues and how we can prepare ourselves to ride out the coming

Hour 1-3 -- Bill Buppert (Publisher of ZeroGov.Com) comes in studio for 3 hours to discuss the current American police state, the loss of our civil liberties, and a host of other freedom and liberty issues and how we can prepare ourselves to ride out the coming collapse

Bill Buppert is a retired Army officer who has written and spoken widely on the issues of freedom and liberty. The abolitionist author of ZeroGov: Limited Government, Unicorns and other Mythological Creatures, he lives with his family in the American SW in the high desert. He is an acknowledged expert on irregular warfare and revolutionary movements.

double recipient of the Congressional Medal of Honor

"I spent 33 years and 4 months in active service as a member of our country's most agile military force--the Marine Corps. I served in all commissioned ranks from second lieutenant to Major General. And during that period I spent most of my time being a high-class muscle man for Big Business, for Wall Street and for the bankers. In short, I was a racketeer for capitalism. I suspected I was part of a racket all the time. Now I am sure of it. Like all members of the military profession I never had an original thought until I left the service." Smedley D. Butler (1881-1940) [source] 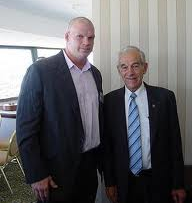 Here are some pertinent links: