Hour 1 -- Nima Mahdjour and James Roten (bit.co.in and coinjabber.com) come on the show to talk about bitcoin

Hour 2 -- Daniel Brown, Tim Baker (YouMeandBTC.com) come on the show to talk about their weekly Bitcoin and liberty podcast

Nima Mahdjour has been a tech entrepreneur in San Francisco for little over 10 years, mainly focusing on online and live auction software solutions. As a result of his tech background and his interest in Austrian Economics he got involved in the Bitcoin space in 2011. In 2013 him and his business partner James Roten launched the address shortener Bit.co.in (http://bit.co.in) and the cryptocurrency business listing and review platform CoinJabber (http://www.coinjabber.com).

Daniel Brown is the Editor-in-Chief of YouMeAndBTC.com where he hosts a weekly Bitcoin and liberty podcast. He also works for Liberty.me where they call him the Everything Elf and he writes for Amagi Metals' Free Market News blog. 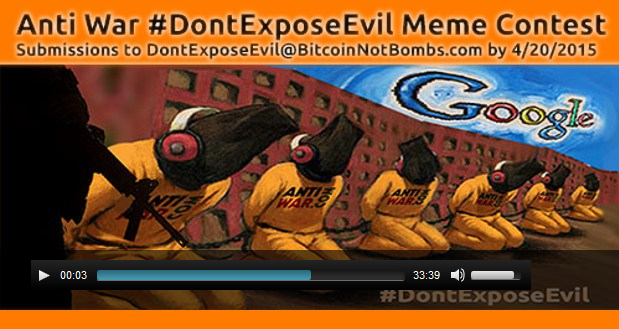 This is episode 65 of You, Me, and BTC, the planet's most entertaining Bitcoin podcast!

First up today, Angela Keaton will share her story about Google's decision to disable AdSense ads on Antiwar.com. Google cited some decade-old, horrific – but honest – photos from Abu Ghraib prison in Baghdad as the reason for the decision. In general, we appreciate Google's endless list of useful services, but the company is certainly not perfect. Ms. Keaton will tell us about her experience and explain why Google's customer service was lacking.

Then later in the show, we'll chat about Bitcoin Not Bombs' efforts to combat Google's behavior. Drew Phillips will share a pro-peace meme contest that was started to bring some of these issues to light. A number of sponsors, including You, Me, and BTC, are offering prizes like Bitcoin and silver to artists who can create the best pro-peace memes. There are currently prizes available for the top 10 entries, so be sure to submit one if you can!

Ammon Bundy (son of Cliven Bundy) on why supporting NEVADA BILL AB408 is important and how you can help...

SUPPORT NEVADA BILL AB408 - THE BILL IS THE #1 MOST PUBLICLY SUPPORTED BILL IN THE NEVADA LEGISLATURE, BUT THE OPPOSITION IS INCREASING.

It is simple, the land belongs to the people.

The natural resources of America are being stolen from the people and claimed by the federal government. Everything we eat, wear, live in, use and so on comes from the earth. If we lose access to the land and natural resources we become beggars to those who control access. Without doubt this is the greatest immediate threat to the individual person and people as a whole. More lives, liberties and property can be taken under this threat than any other we see.

The Nevadan's Resource Rights Bill (NRR) AB408  has only had a number for five days and is is already the most publicly supported bill in the session, out of nearly a thousand. However, we are starting to see opposition to the bill mount by those that want the federal government to own and control all the land and resources. We need to make sure we are louder than them. If you have not already done it, please go to the link below and show your support for the bill. If you can come to Carson City to support the bill on March 31st, please clink on that link and let us know.

Here are the links

Go this link to show support for the bill, https://www.leg.state.nv.us/App/Opinions/78th2015/A/  select bill number AB408, select FOR, and put in your name and address. This is the official website for the Nevada Legislature and legislators use it to determine public support. If you are a citizen of Nevada it is a bonus, but it does not matter where you live, we need the support of all the States around us including those out east. Please click on the link and fill in the form to show your support for the bill.

Show up in Carson City, March 31st at 9 am. Over 15 Nevada State Legislators sponsored the NRR bill and have asked that we fill the house during the committee hearing. We must show up in person and make our presents known. If we fill the house, the committee will pass it and the talk of the 2015 session will be the NRR bill (AB408). With enough of your physical support in Carson City the committee will pass the NRR bill and it will have a substantial chance of becoming Nevada law soon after. We have many rooms booked and buses chartered from Las Vegas and Phoenix. If you plan on coming to Carson City click on this link to receive further information.  https://docs.google.com/a/valetfleet.com/forms/d/1PqDPvH7FKhsYrgmZlBRSYrpW62kKv4yvpikA4Qwun1I/viewform

Send this email to your family and friends and ask them to support as well.

"It is simple, the land belongs to the people"

How to Start Prepping: The First 10 Things Every New Prepper Should Do (Some of Them Are FREE!)