Hour 2 -- Joel Skousen (Publisher of the World Affairs Brief; designer of high security residences and retreats; Author) on his upcoming appearance at the Arizona FreedomFest May 1-3, 2015 at Shots Ranch in Kingman, AZ

Joel Skousen is the publisher of the World Affairs Brief-a weekly internet news analysis service. He is a political scientist, by training, specializing in foreign policy, as well as the philosophy of law, free market economics and US Constitutional theory. His main area of research focuses on helping his readers understand the hidden globalist agenda behind
US foreign and domestic policy. He has developed a working theory to explain the West=s conflicting policies of both supporting and attacking, at different times and places,  ontradictory positions on terrorism, Communist-backed revolutions, drugs, money laundering, and organized crime.

Mr. Skousen possesses a broad background in various disciplines which allows him to analyze geopolitical issues from personal experience. He is a former Marine officer and fighter pilot and is intimately familiar with security and defense issues. During the 1980s he served as the Chairman of the Conservative National Committee in Washington DC, a coalition of conservative organizations opposed to political compromise that undermines
US sovereignty and security. He knows how the political process works and the dangers it presents to the preservation of liberty. While in Washington he also served as the Executive Editor of Conservative Digest where he developed numerous sources around the world. Mr. Skousen travels widely and reads and speaks multiple foreign languages--enabling him to access a wide range of foreign reports.

Joel Skousen' main career for the last 40 years has been to design high security residents and retreats across North America, including, safe rooms and alternative power systems. He is the author of four books, one on law and government, and three on his special design innovations in security architecture and Strategic Relocation:

1. Essential Principles for the Conservation of Liberty, 1984

2. The Secure Home--Architectural Design, Construction and Remodeling of Self-Sufficient Residences and Retreats (2010).

Joel will be one of the featured speakers at this year's Arizona FreedomFest the first week of May. 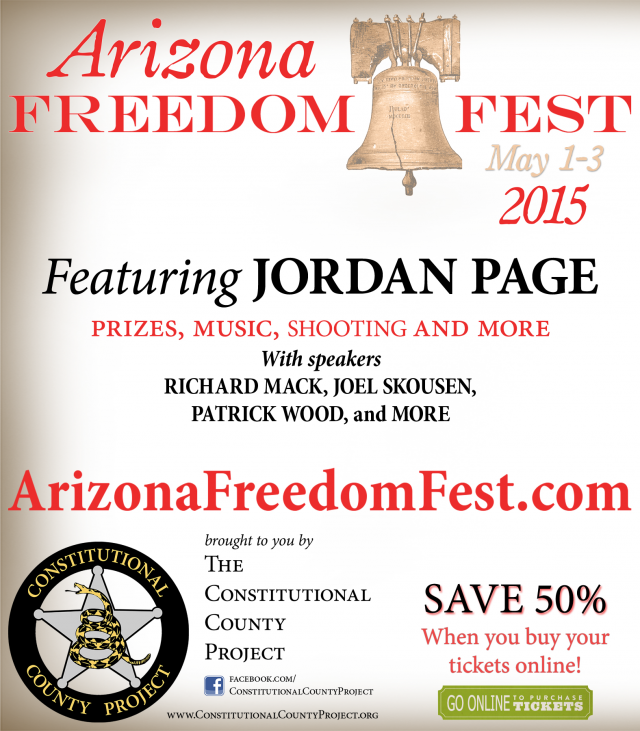 The Liberty movement is alive and well, and waiting for YOU to reconnect at Arizona FreedomFest 2015! Mark your calendars now so you won't miss Arizona Freedom Fest! It's coming up quickly, from Friday, May 1st to Sunday, May 3rd.

Beat the heat this summer while supporting Freedom!

The Arizona FreedomFest Kingman is a dry camping (optional) festival being held at SHOTS Ranch on the 1st, 2nd, and 3rd of May 2015.  SHOTS Ranch is a pristine wooded, 1300 acre private ranch at a cool, 5200+ foot elevation. All ages are welcome to participate in a wide variety of fun entertainment, shooting opportunities and competitions, informative speakers, live music...along with dancing, great food, shopping, and much, much more.

Do you love the great outdoors? This year, Arizona FreedomFest is located at SHOTS Ranch, a pristine wooded, 1,300-acre private shooting range at a cool, 5200+ foot elevation with panoramic views. For only $10 a night per tent or RV you can camp on-site and wake up to the beautiful Arizona Sunrise! Purchase your camping  on our Admissions and Camping Page. Limited Space available.

•Mark Herr, president and co-founder of the Center for Self Governance

E.D.M. Arms is bringing their famous .50 caliber rifles to test fire. E.D.M. is the manufacturer of the most accurate large caliber rifle on the planet. If you have never fired one of these babies before, hold on!

Are you a sharp shooter? Then test your skills at one of these fun events!

•Shotgun Clay bird shooting competition – Shotgun provided if you don't bring your own (Applies to shotgun competition ONLY).

Angela Keaton is the development director at Antiwar.com, the web's leading source of antiwar news, views, and activities and the producer of the Scott Horton Show for Antiwar Radio. She has served on the Libertarian National Committee and as executive director of the Libertarian Party of California. From 1999 to 2005, Angela hosted "The Liberated Space," the libertarian talk and news show on the controversial KOOP 91.7 FM, Austin. She holds a J.D. and M.A. from the University of...

Join us on Saturday, May 2nd, 2015...see EVENT Page for speaking line up
Derrick Grayson also know as "TMOT" or "The Minister of Truth." Grayson has become a widely known and recognized political activist, due in large part to his many YouTube videos which address the social and economic plight of poor and minority communities. Grayson is a musician, motivational speaker and conservative political activist.

"There is no doubt that many Americans are struggling and hurting. Despite all the promises...

Sheriff Richard Mack is the founder of C.S.P.O.A (Constitutional Sheriffs and Peace Officers Association) and established the Constitutional Sheriff Movement. The mission of C.S.P.O.A is to liberate the United States of America from being enslaved by the federal bureaucracy: "Pursuant to the powers and duties bestowed upon us by our citizens, the undersigned do hereby resolve that any Federal officer, agent, or employee, regardless of supposed congressional authorization, is required to obey and...

Mark Herr Sr. is the president and co-founder of the nonprofit educational institution The Center for Self Governance (CSG). Since 2012, Mark has been traveling across the country training citizens to inform discretion, instruct delegated authority, and control instituted government.

Led by the vision of the Founding Fathers, Mark works tirelessly to further the Center for Self Governance's mission to institutionalize...

Joel Skousen is a political scientist, by training, specializing in the philosophy of law and Constitutional theory, and is also a designer of high security residences and retreats. He has designed Self-sufficient and High Security homes throughout North America, and has consulted in Central America as well. His latest book in this field is Strategic Relocation--North American Guide to Safe Places, and is active in consulting with persons who need to relocate for security and increased...

Join us on Saturday, May 2nd, 2015...see EVENT Page for speaking line up
Ernest Hancock is the publisher of www.FreedomsPhoenix.com, and a co-founder of The Freedom Summit www.FreedomSummit.com Ernest is also the founder of Second Amendment For Everyone www.SAFEgunowners.org, Ernest hosts the radio show Declare Your Independence, which strives to create an understanding of the philosophy of liberty by working closely with Freedoms Phoenix to 'Uncover the Secrets & Expose Ernest lives in Phoenix,...

A native of Ohio, he's been a candidate for the Ohio Legislature, served as editor of two newspapers, and has owned several businesses since the age of 23. In 1989 Tom led the only privately-funded election-observation team to the Panamanian elections. In...

Barry Hess is a long-time Libertarian activist, a former, four term vice-chair of the Arizona Libertarian Party, and its Minister of Propaganda.  Barry came to Arizona in 1980, and has been an influential force in the protection of individual rights.  He has worn many hats in his efforts to restore the values lost in the political struggle from, Talk Show host and guest, to sought after international speaker, and he is the author of "The PeaceMonger".

He recently led the largest, most diverse...

Patrick Wood the author and editor of The August Forecast and the August Review and a lecturer who has studied elite globalization policies since the late 1970's, when he partnered with the late Antony C. Sutton to coauthor Trilaterals Over Washington, Volumes I and II. He remains a leading expert on the elitist Trilateral Commission, their policies and achievements in creating their self-proclaimed "New International Economic Order."

An economist by education, a financial analyst and writer by...

On March 25th, The Bureau of Land Management along with at least 4 other federal agencies came onto the Bundy Range and set up a military like compound. On April 5th they locked down the range surrounded the ranch with sniper and heavily armed federally hired mercenaries. Placing armed militants and advanced surveillance equipment on ever entry point of the range. They verbally and physically threatened the community...

Marc J. Victor is an accomplished attorney who is often invited to speak to audiences across Arizona. He has recently addressed the Freedom Summit, the Eris Society, the AZ Libertarian Party Convention and other events aimed at protecting your rights.
Marc J. Victor has represented clients in more than a thousand major felony cases including first and second degree murder, sex cases, gun cases, major drug cases, complex white collar cases, federal appeals, and other complex state and federal...

Dr. Peter N. Steinmetz is a research neurologist specializing in understanding how human thought and emotion is represented at the single neuron level. He obtained his M.D. and Ph.D. in biomedical engineering from Johns Hopkins University and previously owned a computer design and consulting company.

Dr. Steinmetz became interested in the defense of our civil right to defend ourselves in 2013 when legislators threatened to reintroduce an assault weapons ban. A lifelong libertarian, he is a strong...