Founder and President of Oath Keepers

Stewart is the founder and Director of Oath Keepers. He served as a U.S. Army paratrooper until disabled in a rough terrain parachuting accident during a night jump.

He is a former firearms instructor and former member of Rep. Ron Paul's DC staff.

Stewart previously wrote the monthly Enemy at the Gates column for S.W.A.T. Magazine

Stewart graduated from Yale Law School in 2004, where his paper "Solving the Puzzle of Enemy Combatant Status" won Yale's Miller prize for best paper on the Bill of Rights. He assisted teaching U.S. military history at Yale, was a Yale Research Scholar, and is writing a book on the dangers of applying the laws of war to the American people.

Goyette is the New York Times bestselling author of The Dollar Meltdown and his latest book Red and Blue and Broke All Over - Restoring America's Free Economy. An award-winning radio personality, most recently he was heard in 2014 hosting the nationally syndicated Laura Ingraham Show. He has often been called upon to share his views with national televisions...

The Ron Paul Documentary will be written, produced and directed by one of America's leading libertarians, Charles Goyette...

Liberty's Champion Ron Paul and his battle with the Warfare State, the Fed and its Cronies, Printing Press Money & the Lapdog Press.

This Kickstarter campaign marks the first public announcement of an important new project, EMPIRE OF LIES: The Ron Paul Documentary. 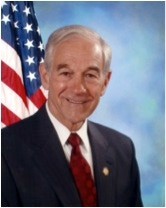 Although Ron Paul has been approached many times by many others to be the subject of a documentary, he has not agreed to participate.

We are very pleased to have Ron Paul's help and cooperation in this production and are grateful for his personal support.

Now we are asking for your help as well. We are counting on the Kickstarter community, lovers of liberty, Ron Paul supporters and others so that we can keep this important project independent.

We are not willing to make a weak or watered-down documentary.

Even in conventional terms Ron Paul is a remarkably successful politician.

He won election to the House 12 times over a span of five decades. Paul's wins include the unmatched record of being elected three times to the House as a non-incumbent. 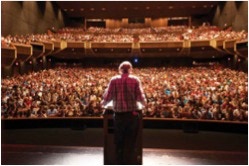 Stunned by the university stadiums and civic arenas filled with young supporters, other candidates like Hillary Clinton marveled at the size and the passion of the Ron Paul crowds.

Others envied Ron Paul's astonishing ability to raise money. But the new digital-age, world-record fundraising was not the work of the campaign organization. Millions poured into the Ron Paul campaign spontaneously from the grassroots.

He was something much more. 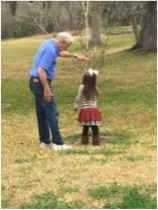 Ron Paul is a family man, a father of five, with 18 grandchildren. A small town doctor who served as an Air Force flight surgeon, he is a retired ob/gyn who delivered more than 4,000 babies in his career.

He is a bestselling author and has written numerous books extolling free markets and sound money. His prescient description of the results of government economic meddling and the folly of the Federal Reserve attest that he is learned in economics.

No less has his farsightedness been on display with regard to the consequences of America's foreign interventionism such as the elective Iraq war.

In public office, Ron Paul has distinguished himself for the conviction of his principles. He has never sold out. Or stated differently, he has never bought in:

He never voted for a tax increase

He never voted for an unbalanced budget

He never voted for a congressional pay raise

He never took a taxpayer-paid junket

He never voted to increase the power of the executive branch

He voted against the Patriot Act

He voted against the Iraq war

He refused to participate in the lucrative congressional pension program

He returned a portion of his annual congressional office budget to the U.S. treasury every year

But there is something else that makes Ron Paul a compelling subject for a major theatrical quality, feature-length documentary.

Ron Paul will be remembered as the most effective champion of freedom in our time!

Ron Paul is now retired from public office. He will turn 80 this year.

It is time to pay tribute to this remarkable man and his message, his memorable character and his enduring principles.

EMPIRE OF LIES is not a biography. It will not spend time describing Ron Paul's time at Duke medical school or about his years as an Air Force flight surgeon.

But it will tell the story of a man who fearlessly fought the destructive policies of his time:

The needless and bankrupting wars of empire…

The destruction of our monetary system by the Federal Reserve …

The corruption of our economy by crony capitalism…

And there is a special place in our story to capture Ron's encounters with the state's lapdog press. 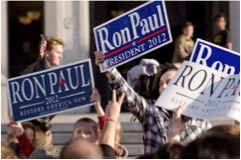 Why he ran for office when he had no expectation of winning and no hope for process tinkering as a solution to our problems;

How he came to be freedom's stalwart and why the temptations of power and ambition that other office holders succumb to had no hold on Ron Paul;

Why he endured when his own party was always on the lookout for a way to subvert his career; And how he could repeatedly win office without participating in the everyday vote-buying schemes and the rampant cronyism of modern American politics. The producers are also eager to share rich examples from Ron Paul's observations, those keen utterances that are destined to be preserved in future books of great quotations. Like this one that gives the documentary its title:

"Truth is treason in the Empire of Lies."

EMPIRE OF LIES: The Ron Paul Documentary is planned for release for maximum impact during the primary elections of the 2016 presidential race as the public's interest in politics increases.

As our way of saying thanks to supporting such an important project, we've got some great rewards for our backers, including t-shirts, mugs, posters and books! 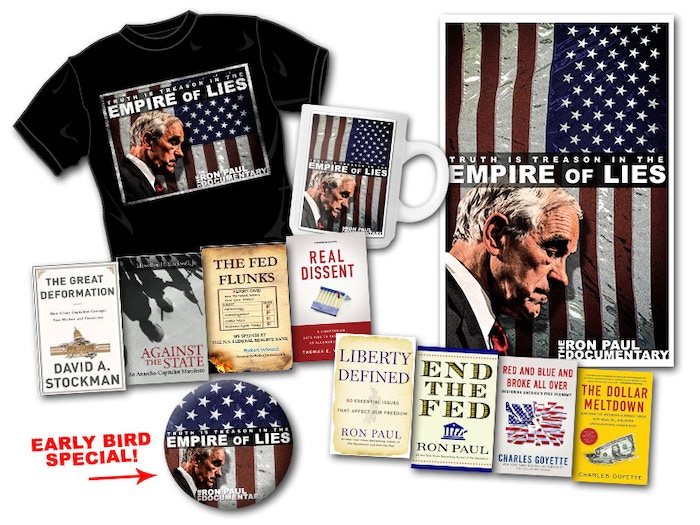 The Ron Paul Documentary will be written, produced and directed by one of America's leading libertarians, Charles Goyette.

Goyette is the New York Times bestselling author of The Dollar Meltdown and his latest book Red and Blue and Broke All Over - Restoring America's Free Economy. An award-winning radio personality, most recently he was heard in 2014 hosting the nationally syndicated Laura Ingraham Show. He has often been called upon to share his views with national televisions audiences on Fox News, CNN, MSNBC, PBS, CNBC and Fox Business Channel. 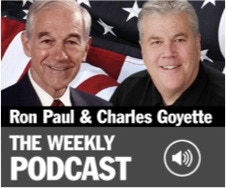 In 2013 – 2014 Goyette arranged the national syndication of twice-daily radio commentaries by Ron Paul, which he also produced and co-hosted. Ron Paul's America was broadcast on 125 radio stations across the nation.

Goyette is pleased to announce that Ken Liljegren has agreed to serve as Executive Producer of The Ron Paul Documentary. Liljegren is President and Founder of Spectrum Video & Film Ltd., in Phoenix. Since 1984 Spectrum has been distinguished for its production quality and creativity. It is a leader in adapting the latest production technology. Spectrum handles millions in production budgets for a roster of leading broadcasters and companies like CNN, E! Entertainment Network, The Golf Channel, National Geographic, Turner Broadcasting, the U.S. Air Force, S. C. Johnson & Son, Pfizer, Inc., Barrett-Jackson, Cancer Treatment Centers of America and more.

The Ron Paul Documentary Project is truly an affinity production. Liljegren is a long-standing Ron Paul supporter and lent his production talents to the grassroots Ron Paul Revolution in the 2008 and 2012 Presidential campaign.

Together Goyette and Liljegren have formed Ron Paul Documentary, LLC, to conduct the business of the project.

The producers share with Ron Paul a mission, to "secure the blessings of liberty to ourselves and our posterity." Accordingly the Ron Paul Documentary, LLC has pledged to donate a portion of the any profits after the documentary's release in 2016 to the Ron Paul Institute for Peace and Prosperity, one of Ron Paul's most effective educational and policy initiatives.

President Reagan's Budget Director David Stockman says this is a "wonderful project!" He is a great supporter of Ron Paul and to show it he is offering autographed copies of his international bestseller The Great Deformation: The Corruption of Capitalism in America as a thank you for your backing!

Other leading champions of liberty are helping too, including Lew Rockwell who you know from his immensely popular website LewRockwell.com. Lew is also the Founder and Chairman of the prestigious Mises Institute. Lew, who was formerly Congressman Ron Paul's chief of staff in Washington, has contributed signed copies of his latest book, Against the State.

We are proud that Tom Woods, bestselling author, historian, and host of the popular daily podcast The Tom Woods Show is showing his support for our Kickstarter campaign with autographed copies of his latest book, Real Dissent.

Austrian-school economist Robert Wenzel, editor of the indispensable EconomicPolicyJournal.com and TargetLiberty.com is on board, too, and we are very grateful for his support. He is showing his thanks to backers with signed copies of The Fed Flunks: My Speech at the New York Federal Reserve Bank.

For details about those and other ways we would like to say thanks for joining us in this project, check out our Rewards.

But the real reward is in acting now – while we can - to secure our freedom and prosperity. The Ron Paul Revolution has awakened a lot of people. More are ready to be awakened every day! We cannot let the state's lapdog press control the narrative of our time.

We need a surge of liberty supporters now!

As Ron says, "We've got to get the truth out there!"

A documentary of this kind can be an expensive undertaking. The archival film footage we need to acquire to tell the story of the EMPIRE OF LIES can be costly. It will help us pull the curtain back on political hacks and to show people who don't know the part the nation's lapdog press played in burying the news of the Ron Paul Revolution.

Some of their so-called reporting was so brazen in its hostility that it simply leaves one breathless.

There are also key people across the country we need to interview to make the Ron Paul story complete. That means travel expenses for our crew.

And of course our promotional efforts are absolutely vital to getting the Ron Paul story in front of as many people as possible.

We will create a powerful documentary on a lean budget. For example, being the fiscal conservatives we are, we are constantly checking their schedules and searching for ways that we can conduct several of our targeted interviews in one place at one time.

But we don't want to discover a revealing piece of archival film footage that is just out of reach… Or leave somebody important out of the filming because the budget won't just accommodate one more day of shooting or another flight for our crew.

The more we raise, this more powerful the story!

And the more people we can reach!

Most importantly, your backing keeps this project independent, and that helps us tell the real story – the truth – in the EMPIRE OF LIES.