Join-Us | Log-In
Freedom Forum | Translate
Dr. Phranq Tamburri (NMD and local activist) will be in studio for the full 3 hour show to give The Trump Report. Phranq has done over 30 interviews worth over 52+ hours (not including the BONUS section) on just giving 'The Trump Report'. This will b

Hour 1-3 -- Dr. Phranq Tamburri (NMD and local activist) will be in studio for the full 3 hour show to give The Trump Report. Phranq has done over 30 interviews worth over 52+ hours (not including the BONUS section) on just giving 'The Trump Report'. This will be one for the record books!

Mr Romney accuses Mr Trump of "playing the American public for suckers", in a planned speech leaked to the media.

Mr Trump has meanwhile mocked Mr Romney on Twitter as a "failed candidate" who should not advise on getting elected.

Many senior Republicans are alarmed at the prospect of Mr Trump securing the nomination for November's election.

In the latest attack from top figures in the party, several members of the Republican national security community wrote an open letter describing Mr Trump's "vision of American influence and power in the world" as "wildly inconsistent and unmoored in principle".

"He swings from isolationism to military adventurism within the space of one sentence," the letter said.

Mr Trump has sought to present himself as a "unifier", after his victories in seven states on so-called Super Tuesday consolidated his position at the front of the race for his party's nomination.

Mr Romney, who has been a fierce critic of Mr Trump, is expected to warn in his speech on Thursday that his policies are a threat to the Republican party and to the country as a whole.

"Here's what I know: Donald Trump is a phony, a fraud," Mr Romney says, according to a leaked transcript of his remarks.

"His promises are as worthless as a degree from Trump University," he is quoted as saying.

Mr Romney will also warn that the nomination of Mr Trump would pave the way to the presidency for Democratic rival Hillary Clinton.

Mr Trump meanwhile accused Mr Romney of having run "one of the worst races in presidential history" and "working with the establishment" to prevent a Republican win.

How extreme is Donald Trump?

Americans search for 'move to Canada'

What was Chris Christie thinking?

His latest controversy centres on his failure to disavow David Duke, a leader of the white supremacist Ku Klux Klan, who endorsed him. He later said he had on several occasions in the past disavowed Mr Duke.

Mr Ryan said on Tuesday that nominees "must reject any group or cause that is built on bigotry. This party does not prey on people's prejudices".

Trump rival Marco Rubio indicated in his speech on Tuesday that the Republican establishment was unlikely to back the former reality TV star.

"If this was anybody else as a front-runner, there'd be people right now saying 'Let's all rally around the front-runner,'" he said, adding, "that will never happen with Donald Trump".

According to the New York Times, some party donors are already trying to raise funds for an anti-Trump effort.

Former Republican presidential candidate Mitt Romney will make a major speech on Thursday in which he will slam GOP front-runner Donald Trump as "a phony" and "a fraud" who is "playing the American public for suckers."

Romney will argue that "a Trump nomination enables" Hillary Clinton to win in November, reported Politico.

"Here's what I know. Donald Trump is a phony, a fraud. His promises are as worthless as a degree from Trump University. He's playing the American public for suckers: He gets a free ride to the White House and all we get is a lousy hat," the 2012 GOP nominee plans to say at the University of Utah in Salt Lake City, according to a transcript of the speech.

"His domestic policies would lead to recession," Romney will say about Trump. "His foreign policies would make America and the world less safe. He has neither the temperament nor the judgment to be president. And his personal qualities would mean that America would cease to be a shining city on a hill."

Trump preemptively responded on Twitter Wednesday by saying: "Looks like two-time failed candidate Mitt Romney is going to be telling Republicans how to get elected. Not a good messenger!"

Romney has been on the warpath against Trump for one week, even going so far as to suggest – without proof – that a "bombshell" may lurk in the billionaire's taxes.

Do you support Trump? Tell the world with this brand new bumper sticker: "DONALD TRUMPS THE REST"

"I think we have good reason to believe that there's a bombshell in Donald Trump's taxes," Romney told Fox News' Neil Cavuto Feb. 24, WND reported. "Either he is not anywhere near as wealthy as he says he is, or he hasn't been paying the kind of taxes we would expect him to pay, or perhaps he hasn't been giving money to the vets or the disabled like he has been telling us he's been doing."

Trump released 92-pages of financial disclosure records last July, which included $1.4 billion in assets and $265 million in liabilities. All candidates are required to release such reports dating back through one calendar year.

Radio host Rush Limbaugh said it "boggles the mind" to think elites in Washington, D.C., would use Romney in an attempt to derail Trump's campaign.

"One of the three-prong strategies [for the GOP establishment is] to wait it out and hope that Trump doesn't get to 1,237 [delegates needed to clinch the nomination]. There's another part of that strategy. If it looks like that might happen, Romney [would] enter the race at the end, like before the California primary, and go in there and actually having contested as a candidate. And then the party unites and coalesces around Romney," Limbaugh said. "I kid you not. This is an establishment dream. There are some in the Republican Party to whom that is the solution."

"It boggles the mind. They're gonna send Romney out there to ring the warning bell," Limbaugh added. "But of all people to send out this warning? To describe what they're doing, you can't avoid sounding mean, unbelieving. It's really hard. Why don't they send [Arizona Sen. John] McCain out? Why don't they send [Bob] Dole out?"

See video below of Romney praising Trump after the real-estate mogul endorsed him for president in 2012: 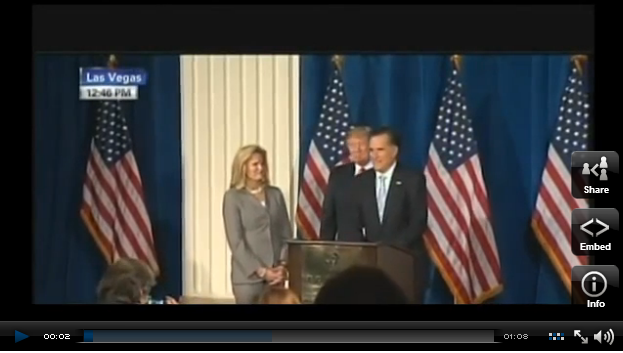 Romney and his political allies have made no secret of their disdain for Trump. Stuart Stevens, who advised Romney during his failed 2012 presidential campaign, said Tuesday night that Democrat front-runner Hillary Clinton is better suited to be commander in chief.

"Personally, I think Hillary Clinton would be a better president than Donald Trump because I think that Donald Trump is a dangerous person and is someone who would embarrass America," Stevens said on Bloomberg's "With All Due Respect," the HuffPost Politics reported. "I have no desire to see Hillary Clinton as president of the United States," he added. "I will not give her my vote, but I can't support Donald Trump."

Another Romney ally to go on the offense against Trump includes his 2012 running mate, House Speaker Paul Ryan.

"If a person wants to be the nominee of the Republican Party, there must be no evasion and no games," Ryan said Tuesday from the nation's capital. "They must reject any group or cause that is built on bigotry."

Hour 2 -- Dr. Phranq Tamburri (NMD and local activist) will be in studio for the full 3 hour show to give The Trump Report (Cont'd)

Hour 3+BONUS -- Dr. Phranq Tamburri (NMD and local activist) will be in studio for the full 3 hour show to give The Trump Report (Cont'd)