Join-Us | Log-In
Freedom Forum | Translate
Patrick Wood (Technocracy.News) on his presentation this Saturday May 7th, on the United Nations’ Agenda 21 and 2030 Agenda and what it means to America - Carlos Alfaro (Arizona Political Director of the Marijuana Policy Project) on the Arizona Ini

Hour 2 -- Patrick Wood (Technocracy.News) on his presentation this Saturday May 7th, on the United Nations' Agenda 21 and 2030 Agenda and what it means to America

Hour 2 -- Patrick Wood (Technocracy.News) on his presentation this Saturday May 7th, on the United Nations' Agenda 21 and 2030 Agenda and what it means to America

On Saturday, May 7 the nation's two leading experts, Patrick Wood and Debbie Bacigalupi, will deliver a definitive and coordinated presentation on the United Nations' Agenda 21 and 2030 Agenda and what it means to America. Bacigalupi will uniquely expose the nuts and bolts of the intended global transformation. Wood will reveal the strategies and names of people who are behind it, as well as its direct ideological connections to historic Technocracy.

As you know, the United Nations is sworn to overthrow Free Enterprise and Capitalism and replace it with Sustainable Development (aka Green Economy or Technocracy).They have a plan, a strategy and a timetable to accomplish it, and it will be a total sea change for everything we know, love and depend on. Thus, the timing and importance of this conference cannot be overstated.

The conference is sponsored by the California state chapter of Eagle Forum, and will be hosted at Calvary Chapel East Anaheim in Southern California.

Best of all, anyone can view our entire presentation for free, as it will be streamed live over the Internet. 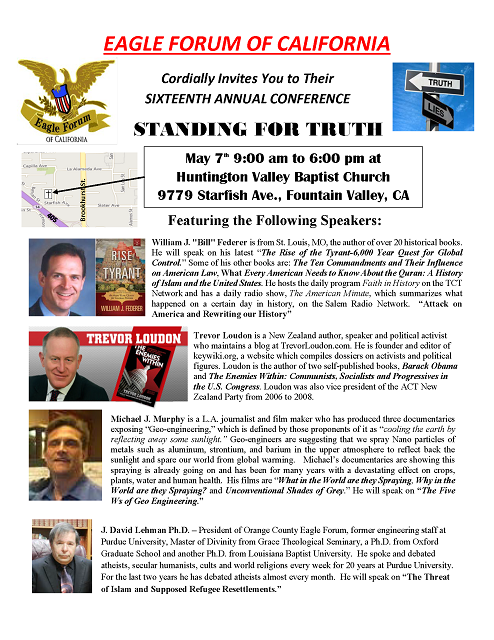 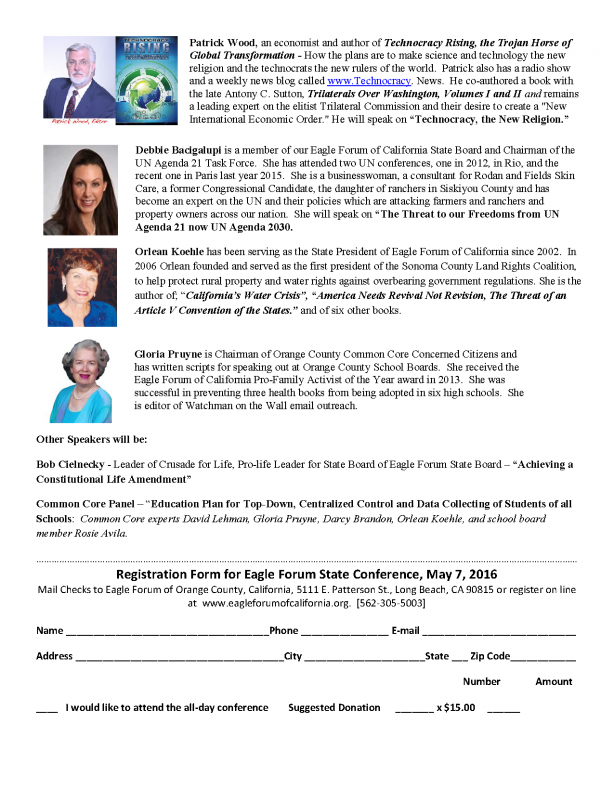 Carlos talks about the Arizona Initiative to Regulate Marijuana Like Alcohol...

It will make our communities safer. Regulating marijuana will replace a dangerous underground market with a system of licensed businesses that ask for ID and only sell marijuana to adults. Products will be tested, packaged, and labeled to ensure marijuana is not contaminated and consumers know what they're getting. Law enforcement officials will be able to spend more of their time and limited resources addressing serious crimes instead of enforcing failed prohibition laws.

It will bolster our economy. Taxing marijuana sales will raise millions of dollars in new revenue each year, most of which will be allocated to public education. Legitimate marijuana businesses will create thousands of good jobs for Arizona residents and utilize the products and services of other Arizona businesses.

It just makes sense. Marijuana is objectively less harmful than alcohol to the consumer and to society — it is less addictive, less damaging to the body, and less likely to contribute to violent and reckless behavior. Adults who can legally consume alcohol should not be punished simply for using a less harmful substance.

We need to collect 150,642 valid signatures of registered Arizona voters to qualify the initiative for the November 2016 ballot. Signatures are often invalidated because they are illegible or because the signer provided incomplete or inaccurate information, so our goal is to collect 230,000 total signatures to ensure we have enough.

What the initiative does:

• It allows adults 21 years of age and older to possess up to one ounce of marijuana and consume marijuana in private.

• It allows adults to grow up to six marijuana plants in an enclosed, locked space within their residences and possess the marijuana produced by those plants in the location where it was grown. No more than 12 total marijuana plants can be grown in a single residence. Property owners and landlords will have the right to prohibit marijuana from being grown on their property.

• It establishes the Department of Marijuana Licenses and Control to oversee a tightly controlled system of licensed marijuana retail stores, licensed cultivation facilities, licensed product manufacturing facilities, and licensed testing facilities. The department will include a law enforcement unit that will be responsible for enforcing regulations, conducting compliance checks, and investigating violations.

• It allows localities to impose limits on where and when marijuana businesses are allowed to operate.

• It requires businesses to test marijuana products and adhere to strict packaging and labeling guidelines.

What the initiative does NOT do:

• It does NOT allow marijuana to be used in public. Public use will remain illegal.

• It does NOT allow unlicensed individuals to produce marijuana extracts using butane or other potentially hazardous products.

• It does NOT affect employers' current marijuana policies or their ability to establish workplace restrictions on marijuana consumption by employees.

• It does NOT change existing laws regarding driving under the influence of marijuana. Driving while impaired by marijuana will remain illegal.

Click here to read the full text of the Regulation and Taxation of Marijuana Act.