Hour 2&3 -- Richard Grove (Tragedy and Hope) comes on the show to discuss 9/11, Vaccines, and a whole host of other liberty issues

Ernest re-caps the Vaccine Education Summit held this past weekend in Phoenix, AZ... 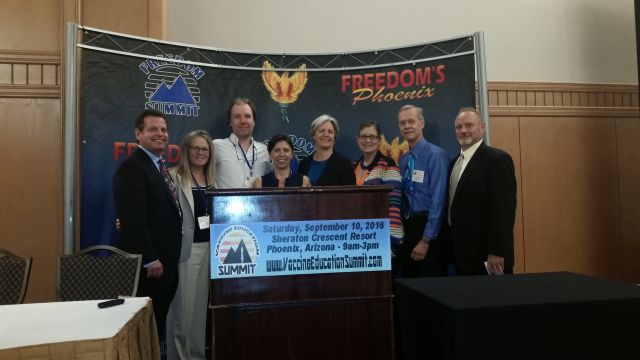 Hour 2 -- Richard Grove (Tragedy and Hope) comes on the show to discuss 9/11, Vaccines, and a whole host of other liberty issues

Richard Grove is an American conceptual artist and forensic historian who frames his groundbreaking research into epic artistic representations to educate his audience.

In 2015 his work was viewed by individuals in 186 countries, proving that his findings are both relevant and meaningful to people around the world.

Richard's podcast, The Peace Revolution, is consistently ranked #1 in Higher-Education by PodOmatic, and provides listeners with a world-class education which no university on the planet can afford to provide. With many episodes ranging from 10-20 hours of content, Richard provides a broad and deep record of evidence which contradicts what we're taught in school, illustrating how to free ourselves from the illusions which bind our freedom.

Richard's work as a forensic historian focuses on the artifacts and evidence of the agenda known as the New World Order, originating with the Last Will and Testament of Cecil Rhodes to create a Secret Society whose sole aim was world domination by way of re-integrating America into the British Empire.

In 2003, Richard Grove filed for federal whistleblower protection under the Sarbanes-Oxley Act of 2002. He soon discovered that the court system, SEC, and corporate media worked together to block the public from hearing about whistleblower testimony; representing himself in court against a multi-billion-dollar international corporation, as detailed in the film 20/20 Hindsight: CENSORSHIP on the Frontline.

After representing himself in a multi-year court battle, he discovered that he was an honest player in a rigged game, at which point he invested his time and interests into digging into the underground history of America to discover how our freedoms were being undermined.

In 2006, he released on mp3 a 2-hour public disclosure "Project Constellation: A Message to the Future of America", which pointed out the myriad contradictions in public beliefs of American history and how individual liberty was being systematically deteriorated.

What may have sounded like conspiracy "theories" in 2006 (Data-Mining and Spying on Citizens, The Planning of Financial Catastrophes, NSA/Google, and Corporate  Media partaking in the demolition of our civil liberties), proves today  to be relevant and verifiable historical facts related by Richard during  his public disclosure via Project Constellation, and evident in his continued productions ever since.

Since then, Richard has created more than 500 hours of educational and informative media productions, in audio, video, and film formats, including a comprehensive conscious curriculum to teach individuals methods for learning anything and everything for themselves (a.k.a. "The Peace Revolution Podcast") to re-ignite self-reliance and restore individual liberty through self-education.

Some of his more powerful publications include:

The History Blueprint (2006-Present) an internet based interactive visual model in the form of a network diagram, connecting 10,000 points of knowledge related to the history of the New World Order agenda; showcasing 40,000 interconnections between the events, persons, and artifacts of evidence related to this topic.

The Future of Freedom: A Feature Interview with NSA Whistleblower William Binney (2015)

"Black 9/11: Money, Motive and Technology" (2012 by Mark Gaffney), which features the testimony of Richard Grove, as introduced into evidence during his trial as a whistleblower.

What You've Been Missing: Exposing the Noble Lie (2010)

TOPICS DISCUSSED ON THE SHOW: 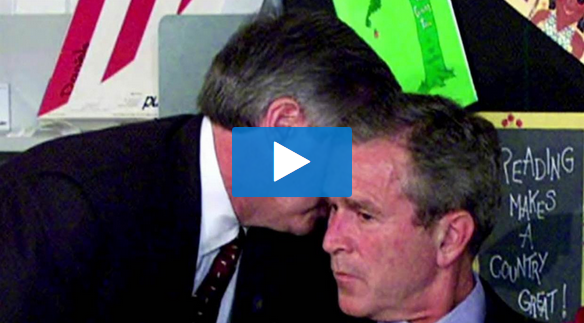 When chief of staff Andrew Card knelt down and told George Bush "America is under attack" 15 years ago Sunday, the words he whispered in the president's ear in a Florida classroom launched what was supposed to be a planned, orderly response to a national emergency.

But what followed instead was chaos, a breakdown in communication and protocol that risked international conflict and could have made Sept. 11, 2001, a still bigger tragedy. There were live nukes on the tarmac at U.S. airbases, a failed communications system, and a security protocol for the president and his potential successors — the "continuity of government" plan — that only one top official followed.

Based on a review of newly unclassified documents, memoirs and other published accounts, and interviews with U.S. officials, NBC News has learned that:

Because of inadequate communications equipment and procedures, top U.S. officials couldn't talk to each other or to anyone else. Russian President Vladimir Putin wanted to speak to Bush to know why the U.S. was preparing to go to DEFCON 3 — but the White House couldn't put him through to Air Force One. Bush had no way to receive phone calls.

After Bush left Florida, where he had been reading a book to schoolkids, his plane was low on fuel but for hours had nowhere to land.

Most of the top 10 people in the president's line of succession, including Vice President Cheney and Donald Rumsfeld, either refused to follow the protocol and go to their designated secure sites, or were out of the country, or were never contacted.

Now-disgraced Speaker of the House Denny Hastert, third in line, observed protocol and was taken to an underground bunker in the Blue Ridge Mountains. But that left him out of touch with all other top government leaders.

Attorney General John Ashcroft was in a government plane and tried to return to Washington, but was turned away by the FAA.

Education Secretary Rod Paige, 16th in line to the White House, was left on the tarmac in Sarasota, Florida. He rented a car and drove back to Washington.

Because of the confused response on 9/11, the U.S. made several changes to its continuity of government protocol and its security preparations in the event of another attack on the capital.

There is a new hardened bunker for top White House officials in the Washington, D.C. suburbs.

A number of mobile missile batteries are deployed around the Washington area. Their locations are not disclosed and they are moved regularly.

A new, secure communications system has been built in Wyoming that can keep top officials connected 24/7 should an emergency arise. But past experience suggests that the "continuity of government" protocol may still be difficult to execute in the event of another crisis. After all, the plan had to be revised after glitches in the response to the attempted assassination of Ronald Reagan in 1981 and again after a 1983 war game that the Russians mistook for the real thing, only to be swamped by the confusion of Sept. 11.

Perhaps the biggest newly uncovered secret is that on the morning of 9/11, when Al Qaeda struck New York and Washington, the Pentagon's annual "Global Guardian" war game was in full swing. Three dozen real nuclear weapons had been loaded onboard intercontinental bombers in North Dakota, Missouri, and Louisiana.

When Bush left Florida on Air Force One amid fears that terrorists would try take down the presidential plane, he flew right into the middle of the war game.

Air Force One had climbed out of Sarasota airport 51 minutes after American Airlines Flight 11 plowed into the North tower of the World Trade Center and 12 minutes after the Pentagon was struck. The fourth and final hijacked passenger plane, United Flight 93, was still aloft over Pennsylvania.

INFORMATION ON VACCINES AND HEALTH...

The Molecular Vision of Life: Caltech, the Rockefeller Foundation, and the Rise of the New Biology (Monographs on the History and Philosophy of Biology)

This fascinating study examines the rise of American molecular biology to disciplinary dominance, focusing on the period between 1930 and the elucidation of DNA structure in the mid 1950s. Research undertaken during this period, with its focus on genetic structure and function, endowed scientists with then unprecedented power over life. By viewing the new biology as both a scientific and cultural enterprise, Lily E. Kay shows that the growth of molecular biology was a result of systematic efforts by key scientists and their sponsors to direct the development of biological research toward a shared vision of science and society. She analyzes the motivations and mechanisms empowering this vision by focusing on two key institutions: Caltech and its sponsor, the Rockefeller Foundation. Her study explores a number of vital, sometimes controversial topics, among them the role of private power centers in shaping scientific agenda, and the political dimensions of "pure" research. It also advances a sobering argument: the cognitive and social groundwork for genetic engineering and human genome projects was laid by the American architects of molecular biology during these early decades of the project. This book will be of interest to molecular biologists, historians, sociologists, and the general reader alike.

This is a reproduction of a book published before 1923. This book may have occasional imperfections such as missing or blurred pages, poor pictures, errant marks, etc. that were either part of the original artifact, or were introduced by the scanning process. We believe this work is culturally important, and despite the imperfections, have elected to bring it back into print as part of our continuing commitment to the preservation of printed works worldwide. We appreciate your understanding of the imperfections in the preservation process, and hope you enjoy this valuable book.

Bexar County District Attorney Nico LaHood: 'Vaccinations can and do cause autism'

SAN ANTONIO — Bexar County District Attorney Nico LaHood on Sunday screened a controversial documentary, "Vaxxed: From Cover-Up to Catastrophe," linking childhood vaccines to autism at a local movie theater, according to a source who received an invitation.

Elected in 2014, LaHood also was videotaped sitting at his desk in his county office making a statement on the controversial topic.

"I'm Nico LaHood," he said. "I'm the criminal district attorney in San Antonio, Texas. I'm here to tell you that vaccines can and do cause autism."

RELATED DATA FROM HOUSTON CHRONICLE: Vaccination exemptions on the rise in some Texas counties

Click through the gallery below to see which Texas school districts have the highest percentage of vaccination exemptions for children and see the video below.

CLICK HERE for the rest of the article and video

[10:03:43 AM] Tragedy and Hope (Studio 1): http://complete-health-and-happiness.com/top-government-scientists-refuse-to-vaccinate-their-children/?t=MAM

[10:11:57 AM] Tragedy and Hope (Studio 1): http://www.organiclifestylemagazine.com/nursing-student-expelled-for-questioning-directives-to-lie-about-vaccines

Hour 3 -- Richard Grove (Tragedy and Hope) comes on the show to discuss 9/11, Vaccines, and a whole host of other liberty issues