Lisa Haven is an independent Christian news analyst and one of the top contributors on www.BeforeItsNews.com. She is also author of www.LisaHavenNews.net and runs her own youtube channel (Lisa Haven) with tens-of-thousands of views per day. Digging deep and finding truth is what she lives for. Her passion is to spread truth no matter where it lies. She covers everything from martial law, to FEMA camps, to end time bible prophecy, to government documents and much more!

Before launching her journalism career, she wrote many bible studies and lead women ministries for a number of years. She will also complete her ministry degree at International School of Ministry this year.

A Critical Event Happened Right Before The Presidential Debate! Here's What They're Refusing To Tell You

By Lisa Haven By now every eye has seen the most recent 2016 presidential debate where Donald Trump battled Hillary Clinton for the seat in the oval office. What the mainstream media is not telling you about this debate, is… Read More ›

By Lisa Haven The globalists agenda is in full swing and with the election underway things are truly heating up on unprecedented levels never before witnessed. The battle between corruption and truth is being waged and you and I are… Read More ›

By Lisa Haven "United Nation military troops may soon arrive and see action on American soil following the United States' announcement of support for "a set of principles that give a green light for U.N. peacekeeping troops and police to… Read More ›

Charlotte Pre-Planned? If Not Then Why Did 70% of Protesters Have This In Their Pocket? What You're NOT Being Told

By Lisa Haven Globalists George Soros, a known instigator and one of the funders of the Black Lives Matter movement, is instigating chaos once again in America, but this time in Charlotte, North Carolina, were hundreds of protestors and rioters… Read

By Lisa Haven Can't we just be done with Obama already? Only a few months of his presidency are left and yet, he feels the need to make a triumphant exit by killing his greatest enemy, American patriotism, and all… Read More ›

A Heavy Warning For Every American: What Just Happened In NY and NJ Is The Tip of the Iceberg

By Lisa Haven "A government which will turn its tanks upon its people, for any reason, is a government with a taste of blood and a thirst for power and must either be smartly rebuked, or blindly obeyed in deadly… Read More ›

A Critical Event Happened Just Before The Presidential Debate! Here's What They're Not Telling You

If Elected, Clinton Will Completely Destroy Our Nationial Bounderies

Sadly, that is precisely what happened today when during a New Hampshire townhall moderated by MSNBC's Chris Matthews, libertarian candidate Gary Johnson had another "Aleppo moment" when asked who his favorite foreign leader is, as the clip below shows. 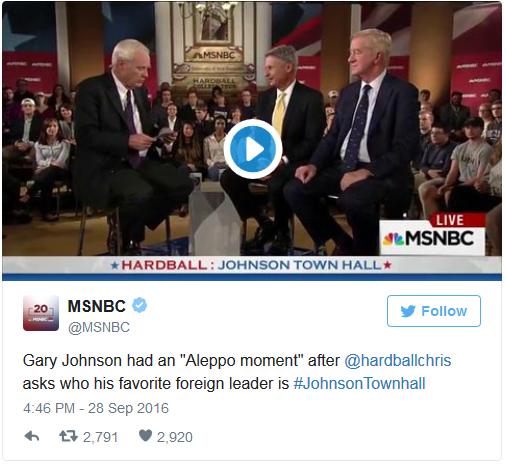 It did not end there.

Bush joked about "President Johnson" during a lunch focused on education reform that was hosted by the Manhattan Institute, and in a private conversation before his speech strongly recommended another person present should vote for the gaffe-prone Libertarian nominee.

"There was an old man talking to Jeb across the table and said, 'I can't bring myself to vote for Hillary and Trump,' and Jeb looked at him and mouthed the word 'Johnson,' silently," one person within earshot of the two told the Daily News.

Pakistan and India are seemingly always at each others' throats, and other factions in the region are only too eager to try to cash in when the going gets particularly rough. Today it was the leader of the separatist Balochistan Liberation Front (BLF), Allah Baloch, who publicly said he would welcome cash and "other support" from India.

Balochistan is Pakistan's largest province, spanning the country's entire west. Ethnic Baloch groups have been waging off-and-on secessionist efforts both in Pakistan, and in the neighboring Iranian province of Sistan-Balochistan, for decades.

Baloch's comments came with him also saying he would welcome help from "the whole world," but singling out India is likely to add to tensions between the two countries, as Pakistan has long suspected India of being secretly involved in the secessionist movements, and indeed, secretly involved in about anything that would negatively impact Pakistan.

Baloch indicated that the BLF would in particular continue to attack Chinese economic interests within Pakistan, which appears to be designed as an incentive to India, since China is siding with Pakistan in most disputes between the two countries.

Iraq PM: Kurds Must Not Use Mosul Battle to Expand Territory - September 29th, 2016