Hour 2 - Dr. Phranq Tamburri Calls in for The Trump Report; Tarzan Keith and Tim Picciott come by the studio to sit in on the interview

Susanne Tarkowski Tempelhof, BitNation Founder and CEO, is an international entrepreneur, tech investor, and writer. She has worked in Sweden, France, Brazil, China, Afghanistan, Pakistan, United Arab Emirates, United States, Libya, Egypt and Indonesia in the past. In 2008 she started Wise Strategic Communication, the first Afghan strategic communication company, which she sold in February 2011 to a US contracting firm.

In the wake of the Arab Spring, in 2011 she started Shabakat Corporation in Egypt and Libya to support local grassroots movements. After the end of the civil war in Libya she turned Shabakat into a technology company, to provide crypto investment consultancy, currency mining in Indonesia, and other frontier applications. She's the author of the forthcoming book "The Googlement – The DIY Guide To Starting Your Own Nation (And Changing The World)" – Nortia Press, and a regular writer and speaker at conferences, having appeared in New York Times, Huffington Post, The PanamPost, CoinTelegraph, Swedish and French Television, TEDx, and many other venues.

Even though she used to work as a military contractor in the past, she has discovered the philosophy of voluntaryism several years ago and is a strong supporter of anarchist movements ever since.

BITNATION is the World's First Virtual Nation – A Blockchain Jurisdiction.

Nation State Governments have failed to keep up with the technologies that are transforming our lives. The Internet has radically interconnected our world and Blockchain technology – a cryptographically secured public ledger that is distributed amongst all of its users – allows us to choose to govern ourselves for the way we want to live now: peer-to-peer, more locally and globally.

Are you ready to make that choice for yourself?

Join the BITNATION team to for Devcon 01 in Amsterdam discuss the various aspects of the Pangea development. The event will be unconference BIL style, and everyone will have an opportunity to present their work and projects.

It's a free event, anyone who RSVPs can attend. However, we would like you to bring a small contribution, whether a short talk on something interesting you are working on, a botte of wine, or a cool gadget to play with.

• Susanne Tarkowski Tempelhof - The State Of The Nation

• Kent Dahlgren - Lucy And The Oracle

• Kenneth Lillieholm - The Intellectual Revolution - Can It Be Prevented?

Place and time to be announced

Devcon will be held at Bitnation's Amsterdam hack space.

More talks and other details will be published shortly :)

Bitnation Pangea - Welcome to the Internet of Sovereignty

Before borders there was Pangea... Now Bitnation is getting ready to bring the world back together with our Blockhain Jurisdiction for Governance services. Find out more and join the Token Sale (Q4 2017) WEBSITE www.bitnation.co SLACK https://slack.bitnation.co/ FACEBOOK www.facebook.com/MyBitnation TWITTER www.twitter.com/mybitnation TELEGRAM www.t.me/bitnationpangea REDDIT www.reddit.com/r/BitNation/ INSTAGRAM www.instagram.com/bitnationpangea

Hour 2 - Dr. Phranq Tamburri calls in for The Trump Report

I'm 31 years old, currently finishing school for respiratory care while Working at the aria casino doing club security for multiple venues day and night. While the shootings took place I was on the strip in the general area surrounding the incident maybe a mile from where it exactly took place. Tim runs the libertarian advisor page and now and then I contribute to it. 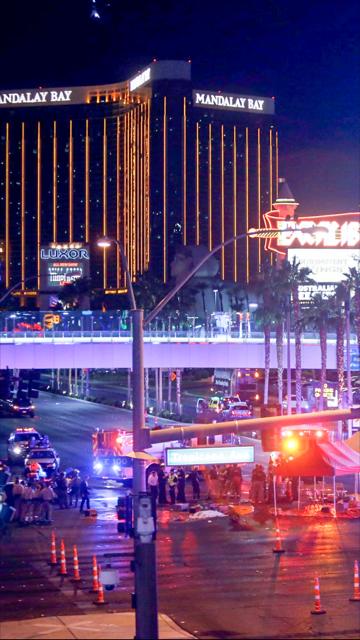 Syracuse native Jeff Tripoli took this photo of the emergency responders who set up to deal with the aftermath of the mass shooting in Las Vegas on Sunday. Just after taking this photo, heavily armed officers told him to leave the area, he said. (Courtesy Jeff Tripoli)

Two of his friends, coworkers of his who do security at the Aria Resort and Casino, were shot and killed Sunday night, he said. He himself turned down an invitation to the Harvest Festival where at least 59 people were killed and more than 500 injured by a lone gunman, 64-year-old Stephen Paddock.

Tripoli, 31, a graduate of West Genesee High School, arrived at the Las Vegas strip to meet a friend just as the first responders were doing triage. He saw victims running away from the outdoor venue. He said he's never seen the strip so empty.

Nightclubs on the strip were still blasting pop songs out their front doors despite the street being shut down. It was eerie, he said.

"I'm not even kidding you when I say this, 20 or 25 ambulances were there, with with empty stretchers lined up waiting for people," he said. "People were coming in from the concert, covered in glow paint or had their shirts off. Injured people were tied up with tourniquets."

He texted all of his friends he knew to be at the concert. Two of them, friends of his since he moved to Las Vegas more than two years ago, did not text him back. When 15 minutes passed without response, he said he had a feeling they had been killed.

"I just felt it in my stomach something was wrong," he said.

Jeff Tripoli, a Syracuse native, has been in Las Vegas for the last two and a half years. He witnessed the aftermath of the Sunday night mass shooting there.

One of his friends was doing security on the side for the Mandalay Bay Hotel, he said, and the other was enjoying the concert. He declined to identify them on the wishes of his friends' families. Authorities have also not identified the pair.

"I haven't had a whole lot of time to really sit and realize what's happened. I didn't even go to sleep with everything that was going on," he said. "The last 48 hours have honestly been a complete mess."

When he arrived near the scene, he witnessed highly armed officers pulling people over and "pulling people out of their cars with their guns," he said, in case there was more than one shooter.

"I'd say the first two hours there were total chaos," he said.

He said he walked around the strip unaware of what was happening. A friend back in called him and updated him on the shooting based on what he saw on CNN.

He said he was in awe at the fast response from the paramedics on the scene. He's certain their quick response saved numerous lives.

"I was really impressed by it. They probably saved a lot of people ... by how quickly they set up and got to to work," he said.

In the aftermath of the shooting, Tripoli, 31, has been in regular contact with his friends' families, who have declined news media interviews and are in shock, he said.

He's also anxious about whether the city he loves will change after this. There are tens of thousands of visitors for conventions and gambling every day, he said, and it's a place with relatively lax security in the open areas of high pedestrian traffic.

"This might affect Vegas in a negative way," he said. "What's to prevent something like this from happening again?"

Why Satan should chair your meetings