We filed in Alabama Supreme court an answer on Jan 1st and the AL SOS was expose to a reply on Jan 8th and to this date has filed nothing.

2) Several from mt team are going to New Orleans to the Unrig the system Conference.   https://unrigsummit.com/#what

Draft only and being edited of our handout for Unrig Conference.

Convening the Brightest Minds from the Right and Left to Fix American Politics...and Party in New Orleans

This is no ordinary conference. No endless panels and speeches. It's fast-paced and fun, with plenty of time to self-organize as you mingle with top advocacy leaders, academics, comedians, musicians, celebrities, activists, philanthropists and journalists. This is about crossing partisan and ideological divides and working together on concrete solutions to unrig America's political system…. with plenty of New Orleans fun mixed in.

The Summit runs from Friday, February 2nd, 1pm through Sunday, February 4th, 2pm CT. Key programming will take place all 3 days, so plan on being in attendance for the entire event.

Saturday night is the marquee event of the Summit: Unrigged Live! An inspiring evening of live music, stand-up comedy, and short speeches in a 1,800-seat historic New Orleans theater. The evening will be hosted by Jennifer Lawrence and Adam McKay and will be livestreamed on multiple platforms. Speakers include Represent.Us Director Josh Silver; Professor Richard Painter; comedians Nikki Glaser, and Adam Yenser; astronaut Ron Garan; former State Senator and Our Revolution President Nina Turner and more, with live music from HoneyHoney, and the legendary New Orleans-based Preservation All-Stars.

Learn How-Publicly Verified Elections are Key to De-Corrupting Our Democracy! 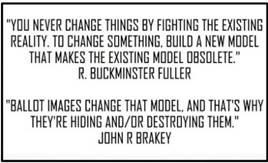 The aftermath of the 2016 U.S. Presidential Primary and General election has brought into public awareness the vulnerability of our election systems to manipulation by outside forces. Unless we rapidly address these systematic vulnerabilities, we have no right to expect that future election outcomes will accurately reflect the will of the voters.

Fortunately, a newly developed method of public oversight of elections allows for far greater accountability and transparency. This unique method can be achieved in time for the 2018 and 2020 election cycles. We will illustrate how the public can now play a direct role in safeguarding democracy by using technological advancements in electronic vote-tallying machines to verify for ourselves and the world the accuracy of election results.

Furthermore, this new technology already is widely in use can detect evidence of and thereby deter manipulation by 'insiders' and any attempts from 'outsiders' like foreign governments or hackers to corrupt our democracy.

This advancement is explained by Dr. Tom Ryan, former chair and founding member of the Pima County Election Integrity Commission: 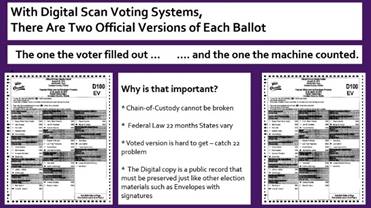 "…There is a simple way to make our elections more transparent. How? By releasing anonymous digital images of the paper ballots. Many modern tabulation systems, including those used in most of Arizona's counties, create and count such images as part of routine ballot processing. Releasing these images would allow anyone to count the ballots, either by hand or using automated software."

Digital scanned ballot images are now the industry standard in electronic vote tallying machines and are presently being used in approximately 50% of election jurisdictions. By November 2018, 60%, 2020, it is projected that 85% of all votes will be counted on machines that have built-in digital imagery and those images is what machine counted. When these scanned ballot images are compared with electronic results, it will become apparent whether the machine results are valid.

While the advancement made with scanned ballot images provides election integrity advocates a path forward in safeguarding our democracy, this solution will not be implemented without intense advocacy.  Even where election departments have acquired this new ballot image technology, AUDIT-AZ/USA has discovered that those departments are not using the technology to its fullest capacity, whether through ignorance or intention. Our full report has detailed examples. Link to paper:  https://tinyurl.com/y9r8vwrh

If fully implemented, this new system can eliminate the opportunity to manipulate or change the outcome of elections with impunity—that is, zero risk of detection--that has bedeviled the old "mark sense" system.

In a 2009 RFI a "Request For Information," correspondence between New York City Election Department and ES&S on the DS200 regarding Ballot Images, ES&S wrote: "Safeguards voter intent – The system captures and retains digital images of every scanned ballot for auditing and adjudication."

ES&S also confirmed to San Francisco Election department in a RFI: "g. Creates and facilities the posting of ballot images files on the department's website so that members of the public can tabulate the same vote information that the Department uses when tallying the official results."

The bad news: The forces of the Status Quo are suppressing this information, destroying the ballot images or releasing image debris instead of images in the audit-able format built into the ES&S DS series and other digital scan systems.

We know from our Arizona lawsuits that the court properly recognized that images are part of the chain-of-custody, when Superior Court Judge Gordon asked the attorney for Pima County, "If you take voted ballots, take a photo copy of them and use those copies to count votes, what makes you think that you can destroy them?"  He then ruled from the bench that the images must be protected.

Our job must be to investigate, educate and litigate by utilizing special legal actions that move fast. We have a plan. We're doing it in two red states, Arizona, Alabama and you can help in others states by being informed.

We've discovered that Fraction Magic, an app, could be installed that causes votes to be counted as fractions instead of a whole vote.  Uncovered by BlackBoxVoting.org, this app if used, can only change the vote tally numbers.  However, it cannot change a complex hard copy, hand-marked paper ballot, pegged to its corresponding scanned ballot image.  When fully implemented, the ballot images and the audit features of these new voting machines can prevent fraudulent practices, including via fractionalized voting and other malicious programming. Link to paper: https://tinyurl.com/y9r8vwrh

Even so-called "Logic and Accuracy tests" done before or after an election begins are subject to programmable overrides. Auditor Mickey Duniho, a master programmer retired after 37 years with the National Security Agency (NSA), testified in court: "[A] L & A test only shows that the machines are working right at that moment."

The security of electronic data can no longer be taken for granted in an age when Volkswagen, "…deliberately programmed 600,000 diesel cars distributed in the U.S. to deceive users – programming them to turn on pollution controls WHILE BEING TESTED and then turning off when on the road."

AUDIT-USA has developed and will employ a comprehensive strategy to introduce public verification audits into the election process, putting the power of election oversight back into the hands of the people. We want elections that are transparent, trackable and publicly verified NOW!

CONCLUSION:  After the many fiascos during the 2016 elections that featured widespread news of hacking and systematic electronic voter suppression, the American people are questioning our election process. In this moment of crisis, we have an opportunity to provide a real solution for the democracy crisis: transparency.  With help from funders and organizers, we can give Americans back the power to oversee our elections and once again trust in election results.

BE THE "WE" with AUDIT-AZ: Join the movement. Learn how we could make Elections Publicly Verified! Our paper goes into detail by giving a view of the problems and how we can take away the impunity of the Black Box to cheat by making it into a transparent box! Link to paper: https://tinyurl.com/y9r8vwrh

Ernest and Davi discuss the Letters of Marque, and how it's coming together...

CEO & Chief Strategist for DarkHorse Unlimited, teaches individuals, families, groups, companies and communities to plan, prepare and train for any critical incident, of any magnitude.

Cat's previous interviews on the Declare Your Independence with Ernest Hancock Radio Show:

At Dark Horse Unlimited, we strive to provide the most comprehensive, real-world applicable strategies and tactics for your everyday life, at home, at work, and everywhere in between. We build training to meet the needs of the customer, not to force needs into pre-defined structures.
One size does not fit all.

We teach individuals, families, groups, companies, and communities to Plan, Prepare and Train for any critical incident of any size.
That's Full Spectrum Survival!

Cat Thor is the Founder, CEO and Head Instructor for Dark Horse Unlimited, LLC. As a former US Army Ranger, he decided to put his warrior skills to use and has been teaching personal defense tactics for 25 years and tactical pistol and rifle for over a decade. With experience in Executive Protection, Disaster Recovery, Emergency Planning, Critical Incident Response, and Logistics Support, CAT has a passion for protection and a cause for continuity.