Roger Ver has been a longtime proponent of voluntaryism, the idea that all human interactions should be by mutual consent, or not at all. He is most well-known for his work promoting Bitcoin. In 2011, his company, Memorydealers.com, became the first mainstream company to start accepting bitcoin as payment. He then went on to create Bitcoinstore.com, the first website in the world to accept bitcoin as payment for hundreds of thousands of items, and was the impetus for the future wave of merchant adoption. He also became the first person in the entire world to start investing in Bitcoin startups. Nearly singlehandedly, he funded the seed rounds for the entire first generation of Bitcoin businesses.

Some other notable actions were:

His resulting $1M USD donation to the Foundation For Economic Education, fee.org
https://www.youtube.com/watch?v=orzhba2dV1A

His $160,000 donation to the defense of Ross Ulbricht, creator of the Silk Road
FreeRoss.org

His paying over $100,000 for national radio ads on more than a hundred stations across the USA advertising Bitcoin from 2011 to 2014

Giving away thousands of bitcoins all over the world, to anyone who would listen.

In his earlier life, he was most influenced by the works of Murray Rothbard, but was also inspired by the likes of Fredric Bastiat, Henry Hazlitt, Leonard Read, Frederick Hayek, Adam Smith, Milton Friedman, David Friedman, and many others in the Austrian school of economic thought.
More information on these types of ideas can be found at www.fee.org and www.mises.org

More recently he has been inspired by the works of Larken Rose, and Michael Huemer on philosophy regarding the legitimacy of government's right to exist at all.

I'm currently involved in numerous Bitcoin related projects. Bitcoin is the most important invention in the history of the world since the internet. If you don't already know about it, google it. Useful Bitcoin related links:

Colin is an entrepreneur and innovator who used his years of experience in the aerospace industry and 13+ years of Software Engineering to develop the necessary solutions for the growth of the technological base of Crypto Currencies. Since 2014 he has been developing Nexus, after becoming involved in Bitcoin in early 2013. He also is researching and developing new energy systems that will contribute to more sustainability in the future including hydrogen, electromagnetics, provides humanity with the technology that lowers our cost of life while increases the quality of life.

Colin Cantrell has been interested in coding and space advancement since a very young age. He learned visual basic at age twelve and by sixteen years old was already designing rockets with his father. Now at age twenty seven, Colin is a hardware and software expert, inventor, composer, musician, philanthropist and entrepreneur determined to bring positive change to the world through his creation of Nexus.

Through his knowledge of quantum physics, advanced coding and humanitarian awareness, Colin has designed a protocol and peer-to-peer network technology aimed at solving some of the most difficult challenges of today and tomorrow. His passion and study of physics, philosophy, history and cryptography, has taught him to remain grounded while enabling him to empower people through education, positivity, technology, and unity.

Colin's previous interviews on the Declare Your Independence with Ernest Hancock Radio Show:

What is Nexus? This is a short explainer video introduction on Nexus, a digital cryptocurrency.

The 3D Chain is an evolution of Blockchain protocol being built from the ground up to provide a strong foundation for Nexus and other future projects using the technology. Using a unique implementation of three consensus channels, Nexus will transform the blockchain into a 3D process called the 3 dimensional chain. By adapting to transaction volume, using trust to secure the network, and weighting transactions to determine the most efficient use of resources, the 3DC will increase decentralization and limit the influence exerted by any one system. The 3DC protocol will organically scale to meet network computational demands, which means the network will get faster as more nodes join the system.

The World's Most Secure Digital Currency

Nexus is the first truly quantum-resistant blockchain, incorporating advanced cryptography designed to negate the threat posed by quantum technology of the future. The 3DC combines 571-bit private keys, 1024-bit Skein and Keccak quantum-resistant hashing algorithms, and an evolving signature scheme called signature chains. Signature chains update the private and public keys that secure your address and obscures them after each and every transaction, maintaining the integrity and security of your account even on mobile wallets. Signature chains offer several advantages over equivalent quantum-resistant schemes such as BLISS and Lamport signatures, being extremely compact and lightweight, making it ideal for blockchain applications.

Nexus is creating a distributed satellite and ground based mesh network to enable global access to the Nexus blockchain. In partnership with Vector Space Systems, a nanosatellite company, we will launch communication satellites to provide a fast, affordable, and secure network with unparalleled coverage, distributed across multiple satellites for enhanced reliability and performance. The capabilities provided by the Galactic Sky platform combined with the flexibility of Vector's launch model bring us one step closer to accomplishing our mission of providing the world with a decentralized currency that can be accessed virtually anywhere, anytime.

One of the most fascinating things about the Nexus blockchain is that it incorporates three different channels to validate data: a proof-of-stake, a hashing proof-of-work, and a prime proof-of-work channel. For over a year, our community has tried to solve a dilemma...

END_OF_DOCUMENT_TOKEN_TO_BE_REPLACED

Nexus – Executive Committee Member of the Chamber of Digital Commerce

END_OF_DOCUMENT_TOKEN_TO_BE_REPLACED

June was an exciting month for the Nexus Embassy as we continue our mission to advance our distributed ledger technology with coding improvements, while forging a new partnership and expanding our Advisory Committee. We also continued to upgrade and further strengthen...

END_OF_DOCUMENT_TOKEN_TO_BE_REPLACED

Satoshi Nakamoto developed the blockchain to be a secure peer to peer network maintaining a distributed ledger. The majority of blockchains follow this concept, yet these systems still run on the relatively centralized Internet, leaving critical junction points vulnerable to attack or control.

Inspired by the idea which gave birth to the Blockchain protocol, Nexus will be placing satellites in orbit and building a supporting ground network to create the world's first truly distributed system operating on distributed infrastructure.

Each satellite will operate as a full node, and connect with its peers in orbit and on the ground to establish a complete mesh network that will be resistant to external control. This robust and autonomous infrastructure will run parallel to the Internet, providing alternate pathways for the global community.

The 2018 Nexus Conference invites visionary business leaders, innovators and entrepreneurs from around the world to explore and collaborate on the future of blockchain technology. This three-day event combines emerging technology education and networking opportunities across many industries. Connect with individuals and businesses solving the pressing challenges within blockchain of speed, security and scalability.

This Nexus Conference is where leading edge professionals come to:

Engage with blockchain experts and business leaders across many industries including music, aerospace, supply chain, government, healthcare and more during speeches, panels and workshops

Build The Future Together

The technology behind Bitcoin is poised to revolutionize nearly every industry.

Come learn from a leading blockchain professor as we take a deep dive into Blockchain 101. 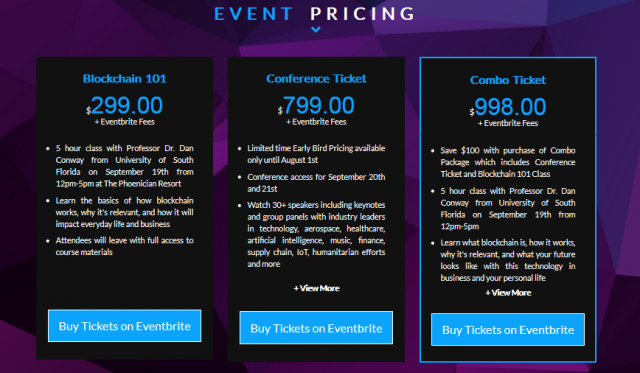 Colin's previous interviews on the Declare Your Independence with Ernest Hancock Radio Show: