Noah (Decentralized Thought on YouTube) talks about The Lightning Network; Decentralization; Bitcoin/Cryptocurrencies and their future

Noah runs the YouTube channel Decentralized Thought, where he breaks past the censorship to get the real information out there about what's happening in Bitcoin and cryptocurrency in general.

Noah's previous interviews on the Declare Your Independence with Ernest Hancock Radio Show:

A conversation with the BCH boys - BitcoinABC VS. BitcoinSV

My Response to Ryan X Charles | Splitting Coins and Poison

A brief Explenation of CTOR (Canonical Transaction Ordering) and Graphene.

If you want to get in contact with me: 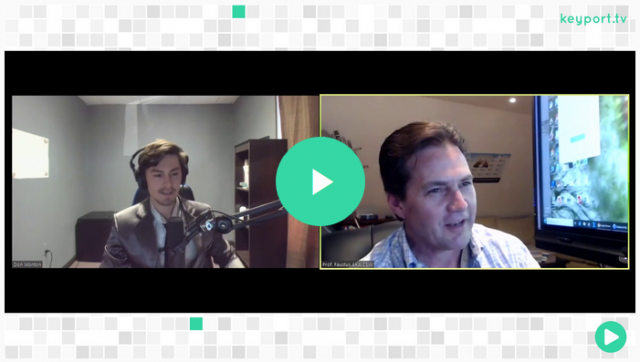 Don Wonton's impromptu interview with CSW. This interview was live-streamed on hashwar.live on Nov 17th 2018.

Dishonest (not "mistaken") intelligence greased the skids for the widespread killing and maiming in the Middle East that began with the Cheney/Bush "Shock and Awe" attack on Iraq. The media reveled in the unconscionable (but lucrative) buzzword "shock-and-awe" for the initial attack. In retrospect, the real shock lies in the awesome complicity of virtually all "mainstream media" in the leading false predicate for this war of aggression – weapons of mass destruction (WMD).

Only one major media group, Knight Ridder, avoided the presstitution, so to speak. It faced into the headwinds blowing from the "acceptable" narrative, did the investigative spadework, and found patriotic insiders who told them the truth. Karen Kwiatkowski, who had a front-row seat at the Pentagon, was one key source for the intrepid Knight Ridder journalists. Karen tells us that her actual role is accurately portrayed by the professional actress in the Rob Reiner's film Shock and Awe.

Other members of the Sam Adams Associates were involved as well, but we will leave it to them to share on Saturday evening how they helped Knight Ridder accurately depict the prewar administration/intelligence/media fraud.

More recently, former National Intelligence Director James Clapper added a coda to pre-Iraq-War intelligence performance. Clapper was put in charge of imagery analysis before the Iraq war and was able to conceal the fact that there were were no weapons of mass destruction in Iraq. In his memoir, Clapper writes that Vice President Cheney "was pushing" for imagery analysis "to find (emphasis in original) the WMD sites."

For the record, none were found because there were none, although Clapper – "eager to help" – gave it the old college try. Clapper proceeds, in a matter-of-fact way, to blame not only pressure from the Cheney/Bush administration, but also "the intelligence officers, including me, who were so eager to help that we found what wasn't really there."

Regarding those Clapper-produced "artist renderings" of "mobile production facilities for biological agents"? Those trucks "were in fact used to pasteurize and transport milk," Clapper admits nonchalantly. When challenged on all this while promoting his memoir at the Carnegie Endowment in Washington, Clapper gave not the slightest hint that it occurred to him his performance was somewhat lacking.

As for the self-licking ice cream cone that "mainstream media" have become, and how they overlook little peccadilloes like feeding at the government PR trough and helping Cheney and Bush attack Iraq, well – now, now – let's not be nasty. Here's how Jill Abramson, The New York Times Washington Bureau Chief from 2000 to 2003, while the Times acted as drum major for the war, lets Bob Woodward off the hook for his own abysmal investigative performance.

Reviewing Woodward's recent book on the Trump White House, Abramson praises his "dogged investigative reporting," noting that he has won two Pulitzer Prizes, and adds: "His work has been factually unassailable." Then she (or perhaps an editor) adds in parenthesis: "(His judgment is certainly not perfect, and he has been self-critical about his belief, based on reporting before the Iraq War, that there were weapons of mass destruction.)"

Are we to believe that the Abramsons, Woodwards, et al. of the media elite simply missed the WMD deception? (Hundreds of insiders knew of it, and some were willing to share the truth with Knight Ridder and some other reporters.) Or did the media moguls simply hunker down and let themselves be co-opted into helping Cheney/Bush start a major war? The latter seems much more likely: and transparent attempts to cover up for one another, still, is particularly sad – and consequential. Having suffered no consequences (for example, in 2003 Abramson was promoted to Managing Editor of the NYT), the "mainstream media" appear just as likely to do a redux on Iran.

This is why there will be a premium on honest insider patriots, like Karen Kwiatkowski, to rise to the occasion and try to prevent the next war. Bring along your insider friends on Saturday; they need to know about Karen and about Sam Adams Associates for Integrity in Intelligence.

Please do come and join us in congratulating Karen Kwiatkowski and the other SAAII members who also helped Knight Ridder get the story right. (Those others shall remain unnamed until Saturday.) And let insiders know this: they are not likely to hear about all this otherwise.

FREE: But RSVP, if you can, to give us an idea of how many to expect; email: raylmcgovern@gmail.com

ALL WELCOME: Lots of space in main conference room

About the Sam Adams Associates

Sam Adams Associates for Integrity in Intelligence is a movement of former CIA colleagues of former intelligence analyst Sam Adams, together with others who hold up his example as a model for those in intelligence who would aspire to the courage to speak truth to power. SAAII confers an award each year to a member of the intelligence community or related professions who exemplifies Sam Adam's courage, persistence, and devotion to truth – no matter the consequences. Read more about the history here.