…is becoming unbearable.  I am moved to pity by what I am seeing, and while this isn't a 2019 prediction, perhaps it is an early obituary.  The tweeting AOC is the canary in the social-political coal mine, or perhaps the caged birds of Birdbox, high-pitched, precarious, panicking in the discovery that they are trapped, and that it is only their death or permanent capture that gives their life meaning, if at all.

So sad.  Virginia Governor Northam – progressive, pro-state, pro-military, pro-big pharma – by definition anti-life – has stumbled into an over-the-top statement supporting post-birth abortion, aka infanticide.  I'm sure the dear man didn't mean a word he said, but shrinking support for progressive lunacy among the core democrats – like these business owners, and this guy, and the shrinking subsets of "reliable" democratic voters, is driving socialists insane.

Why can't people just admit that eliminating private property, living in a sharing society under the heavily equipped and magnificent direction of a great globally-minded bureaucracy is glory indeed?  I mean, we have seen so much progress made, and yet, as the years unfold, every gain is diluted or reversed, every intended end subverted by the very people it was designed to benefit.

We see the illegalizing of large size soda and plastic straws, obscene municipal abuses from parking enforcement, property seizures, and local political corruption and ever-increasing regulation, taxes and fees.  We see many states – and not just on the liberal coasts — literally taxing their golden geese into a one-way flight.  We see the IRS and TSA shutdown greeted with celebration at the public recognition that these agencies are not considered necessary to government function, even as they groaned at how unhappy these bitter grifters and gropers could make us.

The Department of the Interior has a "win" turned into a costly loss in terms of rancher rights, the FBI has become exactly the kind of status-conscious, inbred, incompetent organization that Hannibal Lecter could describe perfectly with just the tone of his voice, and US intelligence agencies and defense leaders come across as chubby, pale-faced whiners seeking to maintain and grow their black budgets as they have done for the past 70 years, wondering why the general population doesn't see them as heroes and whistleblowers.

We also have the neoconservatives – Bolton, Pompeo and Pence – the self-described US Troika of Tyranny demanding that their mini-Saddam Hussein be installed over the oil fields of Venezuela, and that Russia vacate their lending commitments relating to Citgo.  My bad — Bolton actually meant the super scary troika of the microscopic socialist economies of Cuba, Nicaragua, and Venezuela.  Tragically, the Democrat topliners – just as dependent as the Republicans on military-industrial spending and war as a business — are in a position of supporting Bolton and the neoconservatives in demonizing good old-fashioned overseas socialism wherever it interferes with US oligarchy.  I am simply nauseous at seeing these progressive workers being forced to repeatedly swallow such a public betrayal.  And on top of that, the whole project has already failed just as they brought in the walking corpse of Elliot Abrams.

The sheer stupidity and desperation of this new neoconservative intervention is domestically matched by a theatrical pre-dawn FBI burlesque show in Florida to bring to justice the odd man accused of lying to a government agent.  The American public was greatly underwhelmed, and the raid compliantly recorded by CNN resulted in the 100 million raised brows of 200 million average Americans who live near meth houses, fentanyl distributers, and thieving politicians, and who hear crickets daily from law enforcement about it.

Government is the problem.  Too much, too unrestrained, too greedy for war, too self-interested and stupid to be taken seriously.  This simple timeless truth is the sad flaw in the progressive and socialist movement.  The very government they'd like to be bigger, more involved in just distribution of whatever people deserve, desire and demand, more maternal, paternal and dominant – isn't holding up its end of the bargain.  It's not proving itself capable of actually killing and eating the "rich" and it is constantly proving its capability to kill and consume the poor.

The news reporting on all of this – even as it leans 95% towards the socialist and progressive left – still can't avoid all the facts, and reality doesn't bode well for American socialism.  Be it pop, plastic, planetary propaganda, prenatal policy or petroleum – our American socialist mouthpieces are like adorable little fluffy puppies – yipping and squealing, digging pointless holes, and chasing their tails.

Matt White became interested in Bitcoin decentralization and blockchain technology in 2013. In his 20's Mr. White founded owned and operated an Alaska based adventure tour company that served a global market for 18 years.  Matt was active developing initiatives for non-extractive equity based land use solutions on public lands. He has worked with leading political, science and thought leaders. "Starting a business on any frontier is difficult. When you are further challenged with shaping an industry in an unknown future environment, that's when it gets exciting!"  Matt is a professional skier, motorcycle racer, cyclist, adventurer, consultant, friend and lover of life. "The Edge… there is no honest way to explain it because the only people who really know where it is are the ones who have gone over." H. S. Thompson

Using crowdsourced research, game theory and cryptocurrencies it will enable people all over the world to research, verify and score the truth of almost any piece of knowledge. We implement this by using game theory, blockchain and cryptocurrency to incent rational behavior. The resulting effort is hashed/stashed to the blockchain via a smart contract to ensure the sanctity of the Truth Hive (Trive™) process. 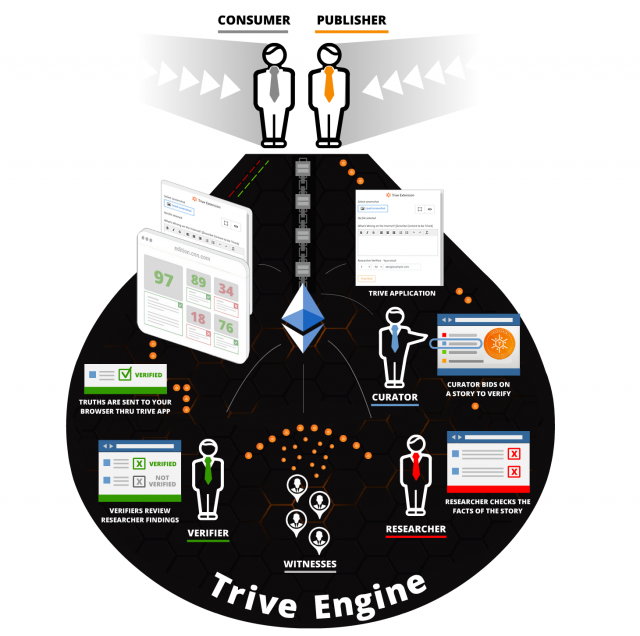 Founder & CEO: Bill is the driving force behind the vision, design and creation of Minds. He is editor of multiple disruptive media organizations with millions of followers including Alternative World News Network, Exposing The Truth and Minds.com. He is also a writer, musician, artist and freedom of information activist.

We are an open source and decentralized platform for Internet freedom. Get paid in crypto for your contributions to the community.

How the economy works