Hour 2 - Tim Picciott (Crypto Self Direct; The Liberty Advisor) on the Economic Report

James Corbett (The Corbett Report) on a variety of news headlines 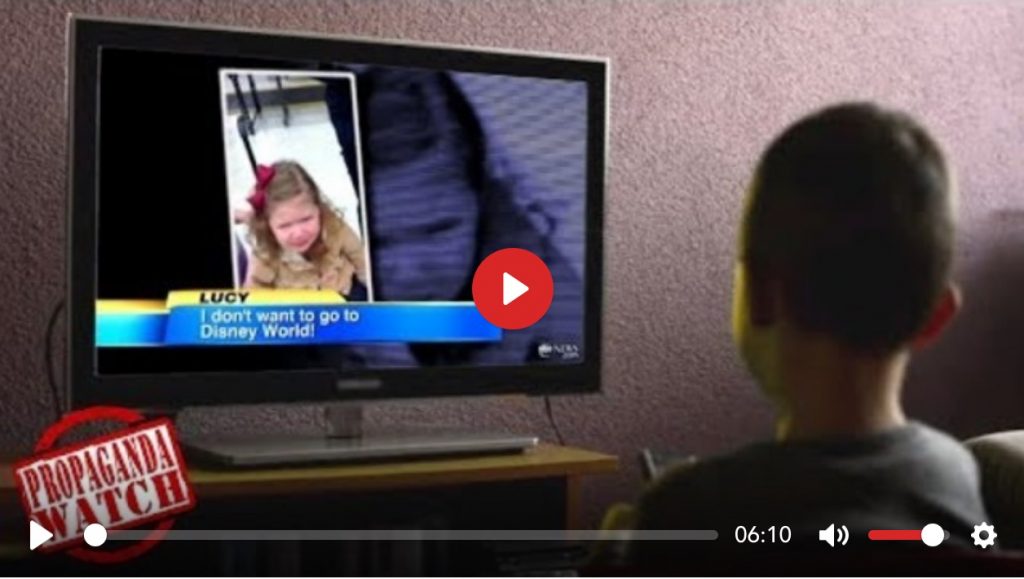 You are NOT strange if you are angry about TSA molestation. In fact, you're strange if watching strangers getting molested doesn't make your blood boil. That's exactly why the talking heads on TV try so hard to convince you otherwise.

END_OF_DOCUMENT_TOKEN_TO_BE_REPLACED

The TSA (and other experiments in evil) 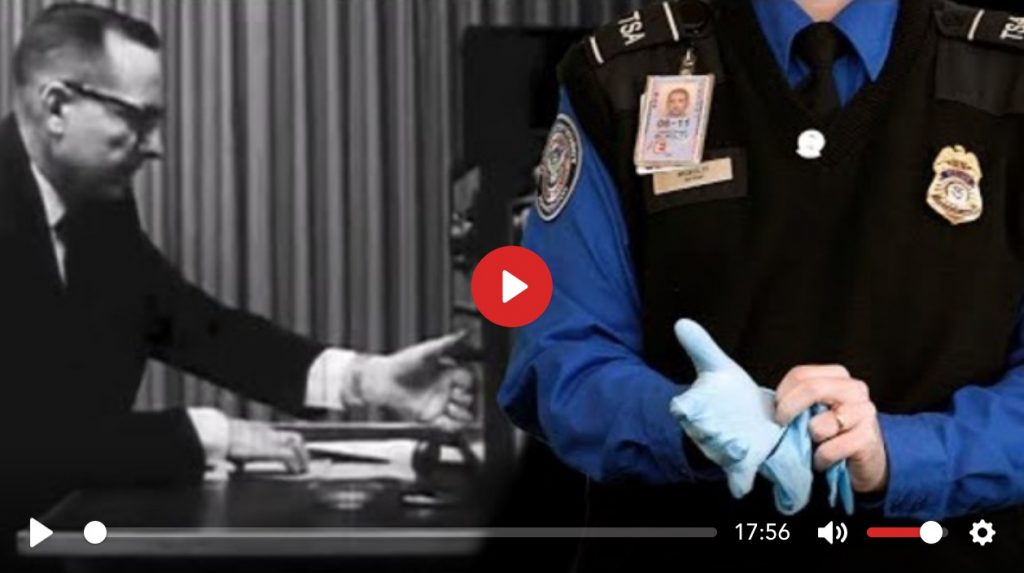 In 1961, a psychologist conducted an experiment demonstrating how ordinary men and women could be induced to inflict torture on complete strangers merely because an authority figure had ordered them to do so. In 2001, the United States government formed the Transportation Security Administration to subject hundreds of millions of air travelers to increasingly humiliating and invasive searches and pat downs. These two phenomena are not as disconnected as they may seem. Join us today on The Corbett Report as we explore The TSA (and other experiments in evil).

END_OF_DOCUMENT_TOKEN_TO_BE_REPLACED 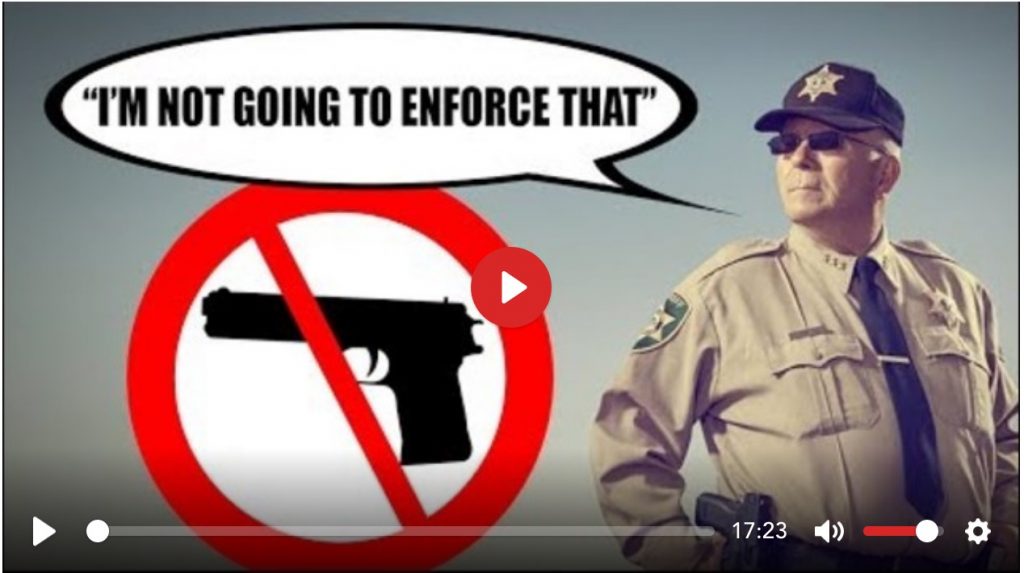 This week on the New World Next Week: the 9/11 kangaroo court has a medical mishap; a Taiwan school educates children about money; and sheriffs disobey unconstitutional gun grab.

END_OF_DOCUMENT_TOKEN_TO_BE_REPLACED

Election Interference Is OK When Uncle Sam Does It! – #PropagandaWatch 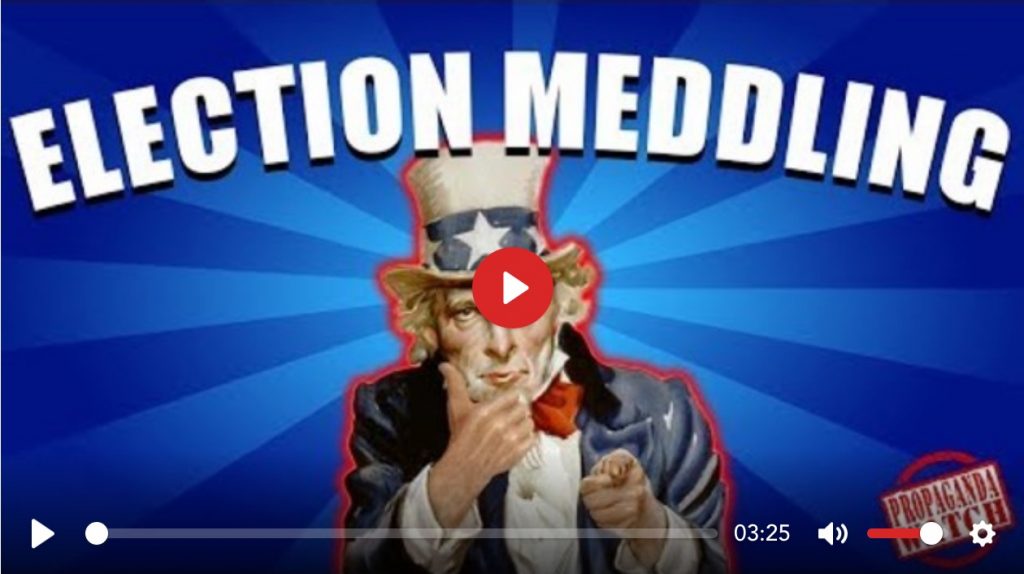 So let me get this straight: The Russians brought America to its knees with a few facebook ads, but Uncle Sam's concerted and ongoing efforts to overthrow governments around the world and interfere with elections is perfectly fine? Because…democracy? Riiiiiiight.

END_OF_DOCUMENT_TOKEN_TO_BE_REPLACED 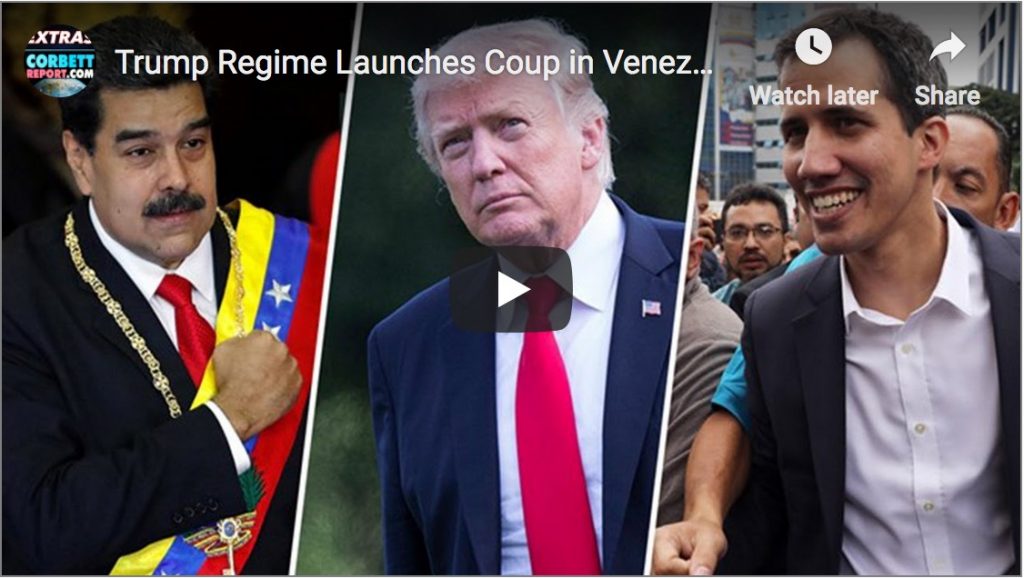 Daniel McAdams of the Ron Paul Liberty Report and RonPaulInstitute.org joins us today to discuss the turmoil taking place in Venezuela, where a US-backed coup is once again taking place. We discuss the roots of the current crisis, how and why Trump and the neocons are involving themselves, and what anti-war activists need to do to confront this latest round of propaganda for imperial interventionism.

END_OF_DOCUMENT_TOKEN_TO_BE_REPLACED 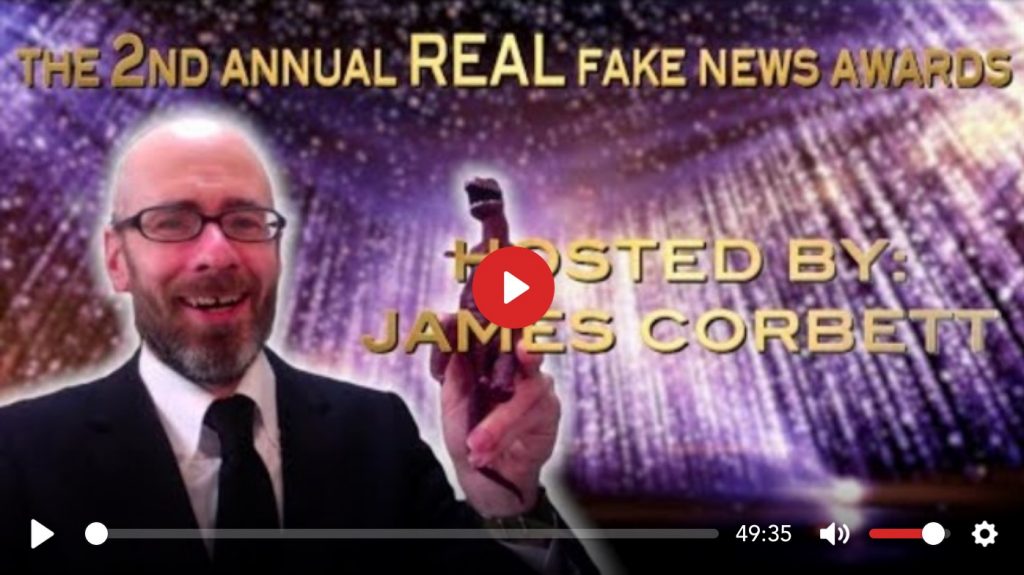 Live (by which I mean recorded) from western Japan, it's The 2nd Annual REAL Fake News Awards, that ceremony where the worst Fake News offenders of the past year are dishonoured with the shameful Dino awards. So will The Guardian retain its title as biggest purveyor of fake news or will a new challenger come along to take its place? Find out in this year's most exciting award show!

END_OF_DOCUMENT_TOKEN_TO_BE_REPLACED 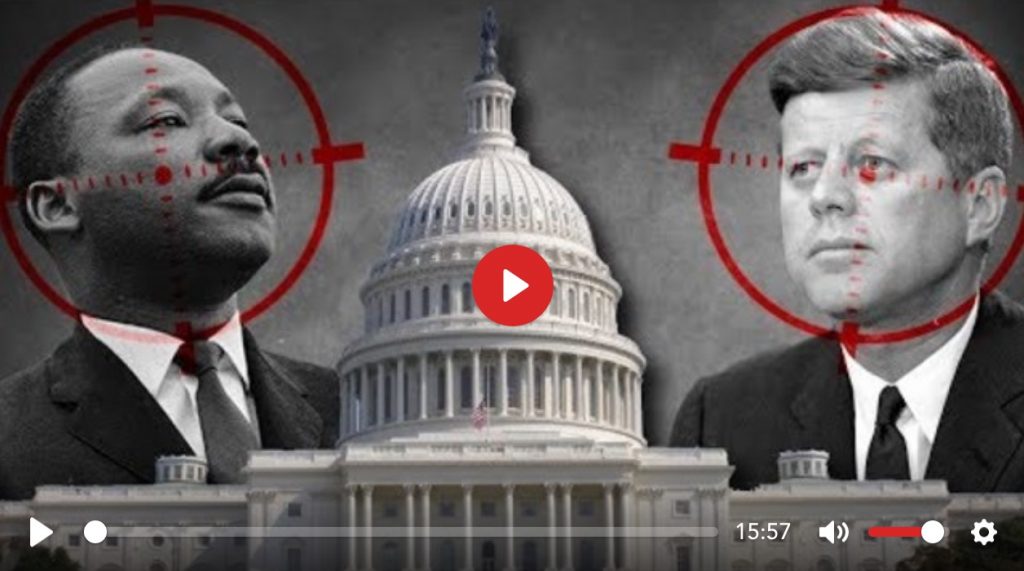 This week on the New World Next Week: the Kennedy and King families speak out on the assassinations; the next stage of China's social credit surveillance grid rolls out with Deadbeat Map; and Big Pharma faces a billion dollar lawsuit for infecting Guatemalans with syphilis.

END_OF_DOCUMENT_TOKEN_TO_BE_REPLACED

Just when you thought "fake news" was only about those dastardly Russians hiding under every bed, Japan comes out and admits that 40% of its economic data is bogus. That's right, a report from Japan's Internal Affairs Ministry this week reveals that 22 of the 56 key economic statistics reported by the government are faulty and "that irregularities in 21 of the 22 sets amount to violations of the statistics law."

The story is set to become yet another political scandal plaguing the beleaguered reign of Prime Minister Abe. Not only did the government's use of the faulty statistics lead to an underpayment of unemployment benefits, but, worse yet (according to opposition members in the Japanese Diet), the news is threatening to deliver a serious blow to Japan's global reputation.

"There is no telling how far the impact has spread," one senior BOJ official has ominously warned.

But fret not, dear Japanese. This scandal doesn't make you stand out from the crowd at all. In fact, quite the contrary. It's a well-known fact that every nation in the world fudges the numbers and cooks the books to make things seem rosier than they really are.

What? Is the dodgy data practices of every government in the world news to you? Then don't miss this months edition of The Corbett Report Subscriber where I dish all the juicy details and expose the statistical shenanigans of the central bankers and their political pals. Also, stick around for this week's recommended reading, listening and viewing.

Has the Chinese Dragon Been Tamed?

Chinese President-for-Life Xi Jinping is warning that the glorious Communist Party of China (CPC) "is facing long-term and complex tests in terms of maintaining long-term rule, reform and opening-up, a market-driven economy, and within the external environment." Or at least that's how BilderBloomBerg is putting it. Rothschild Reuters, for its part, is characterizing Xi's latest pronouncement as a warning about black swans and gray rhinos. And all of this comes on the heels of the news that the Chinese GDP has dropped to its lowest growth rate since the 2009 crisis (not to mention the reports that Xi has "opened the door to war with Taiwan").

So what does all of this mean? Is the Chinese dragon falling victim to Trump's trade war? Is the CPC about to crumble? Is it a cornered animal about to lash out?

So, has the Chinese dragon really been tamed or is this just more MSM hype and fake news? Find out all the details in this week's edition of The Corbett Report Subscriber. Also stick around for a subscriber video on yummy yummy fake plastic food . For full access to the subscriber newsletter, and to support this website, please become a member.

Hour 2 - Tim Picciott (Crypto Self Direct; The Liberty Advisor) in studio for the Economic Report

He works with Bitcoin and Crypto early adopters to provide advanced financial planning solutions to help them pay as little taxes as legally possible on their highly appreciated asset(s). He also advises crypto-enthusiasts as to how they can invest into
"Crypto IRAs" using self-directed IRA's and 401(K)'s.

Facebook's secretive crypto division has reportedly made its first acquisition, quietly onboarding most of the research team from a blockchain startup that specializes in smart contract development.

The Chainspace website describes its project as "a planetary scale smart contracts platform" that uses a "distributed web of blockchains for scalability, speed and privacy."

A banner at the top of the website reads:

"We're excited to announce that the team is moving on to something new. Chainspace code and documentation will still be open source, and all previously published academic work remains available."

Quoted in the report, a Facebook spokesperson confirmed that former Chainspace employees are working in its blockchain division but was mum on pretty much everything else:

"Like many other companies, Facebook is exploring ways to leverage the power of blockchain technology. This new small team is exploring many different applications. We don't have anything further to share."

According to Cheddar, the purchase was an "acqui-hire," suggesting that Facebook was more interested in Chainspace's research team than its technology, and the company spokesperson reportedly denied that it had acquired Chainspace tech. Facebook's cryptocurrency could be integrated into WhatsApp, sources have said. | Source: Shutterstock

As CCN reported, Facebook has been working on a blockchain and/or cryptocurrency project for some time now. The company has been tight-lipped about what form this project will take, but sources have said that it will likely take the form of a fiat-backed "stablecoin" integrated into chat platform WhatsApp.

U.S. based, Crypto Mining, co-location provider. We offer turnkey server hosting services. "You own and we maintain, set it and forget it!" 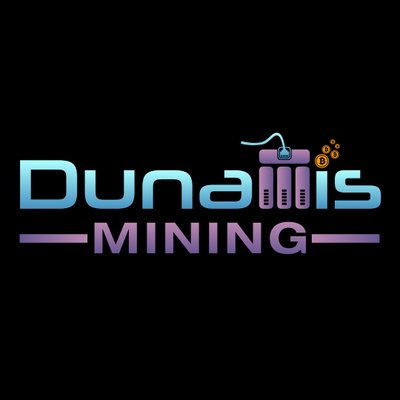 My name is Charles rudibaugh.  My wife and I started playing around with cryptocurrencies a year and half ago. Right away, we realize the consistent money was in mining. We got involved in several overseas cloud mining schemes that we put money into, but weren't able to inspect and tour the facility and make sure our money was going into a legitimate business with legitimate mining. We made it out alive and, with some great connections, we learned a lot and ultimately identified a major gap in the offerings in the market place. When we were asked to be brought onboard as Executive VP's of Dumanis, we were hesitant at first but after doing our due diligence, we couldn't have been more excited. We will make Dunamis the largest co-location company in the world.

Dunamis is a co-location company. It's basically a fancy word for a hotel for your computers. We provide the space and the technical support, you own the machine, we take care of it for you, and your machine pumps out your profits to your wallet every day.... We sell the best machines at cost to make the most money and we sell high capacity secure mining space contracts for 1, 3 and 5 years. We have a 75 year power contract with the power company for 5 cent per kilowatt power and we pass our power subsidies on to our clients so they can get profitable fast.

All of our clients own their own machines and they can come to see and visit our facility Monday through Friday right here in Tempe, Arizona. We have a larger facility with 35000 ft² and room enough for 75,000 machines up in Pinetop with more power than we can use. Our faculty and model are powered to pay.

Dunamis means power I'm Greek. We are powered to pay.