Join-Us | Log-In
Freedom Forum | Translate
Jay Noon (Freedom Activist; Survivalist) comes on the show to talk about a variety of liberty issues, prepping, cryptocurrencies, predictions for 2019, and more - Jacek Spendel (Director of Project Arizona) recap 2018, and what's in store for the com

Hour 1-2 - Jay Noon (Freedom Activist; Survivalist) comes on the show to talk about a variety of liberty issues, prepping, teaching people about the basics of tools (what they are, cuz some people don't know), welding, etc...

Hour 3+BONUS - Jacek Spendel (Director of Project Arizona) comes in studio to recap 2018, and what's in store for the coming year. Jacek brings some of the Project Arizona students with him: Mariya Kapinos (from the Ukraine), Krzysztof Moszy?ski (Poland), and Andrea Hernandez (from Mexico).

Jay's previous interviews on the Declare Your Independence with Ernest Hancock Radio Show: 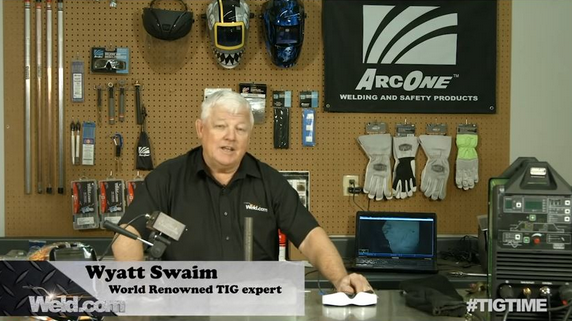 Behind the hood welding videos getting you up close and personal with the weld. Weld.com welding videos are a series of welding shows that are loaded with welding tips, tricks and hints that will help you drop that perfect bead every time! Whether you are trying to become better in the areas of TIG Welding, MIG Welding, Stick Welding or Cutting; Weld.com has what you need. All videos are shot from "behind the hood" so you can get the welders perspective. In addition to showing you how to weld, many times we will show you common mistakes and how to avoid them.

With over 30 years experience, Wyatt Swaim is known throughout the world as the leading expert in the TIG Welding Industry.

The author of a number of articles on high technology welding, today, Wyatt consults for The Lincoln Electric Company, and is dedicated to training others to the level of Aerospace TIG Welding. Known throughout the industry as "Mister TIG™", Wyatt conducts advanced training seminars for the Experimental Aircraft Association (EAA), Motorsports teams, and is part of the trackside welding team at the Indy 500. He has done IRL and CART race welding throughout the United States and Brazil, and regularly demonstrates TIG Welding at the AWS Show, the Essen Welding Show in Germany, and the Canadian Welding Show. Wyatt can be reached at technical@tigdepot.net.

Hour 2 - Jay Noon (Freedom Activist; Survivalist) comes on the show to talk about a variety of liberty issues, prepping, cryptocurrencies, predictions for 2019, the effect activism has on the culture, and more

Hour 3+BONUS - Jacek Spendel (Director of Project Arizona) comes in studio to recap 2018, and what's in store for the coming year. Jacek brings some of the Project Arizona students with him: Mariya Kapinos (from the Ukraine), Krzysztof Moszy?ski (Poland), and Andrea Hernandez (from Mexico).

Jacek Spendel (Director of Project Arizona) comes in studio with Mariya Kapinos (from the Ukraine), Jorge Andres Galicia Rodriguez (from Venezuela), and Andrea Hernandez (from Mexico)

Jacek Spendel – is Founder and President of the Freedom and Entrepreneurship Foundation. He is also European Programs' Director at US-based Language of Liberty Institute.

Jacek obtained master's degree in sociology from the University of Silesia in Katowice. He also studied at Georgetown University in Washington, DC and Jagiellonian University in Cracow where he was a PhD candidate in political philosophy (unfinished). Over the years, Jacek accumulated experience in management from KoLiber Association (President, 2006-2007) and Globalization Institute (Project Manager, 2005-2012). During that period he interned at various institutions, including: Kodak Eastman Company (USA), Goldwater Institute (USA), Institute for Free Enterprise (Germany). He is also alumni of two programs of The Fund for American Studies: AIPES in Prague, and Capital Semester in Washington, DC.

Jacek strengthened his management skills with Think Tank MBA and ATLAS Leadership Academy (2013). He practiced them in many projects, among them: organization of dozen Liberty English Camps, directorship at Polish-American Leadership Academy, production of 12-episodes of Freedom under Fire video series , and coordination of ESFL in Poland. He also used to run his own pizza business in Katowice. Currently he is busy with Project Arizona, internship-educational project for international students he runs in Phoenix.

Mariya Kapinos (e-mail: marionkapinos@gmail.com) from Ukraine
BIO: Ukrainian rising star of journalism and video production! Despite her young age (24) she is having a rich portfolio. A graduate of literature (BA) and journalism (Msc), she works as staff writer/video editor for "The Kyiv Post" which is a major English language journal in Ukraine. Over the past few years she interned in number of foreign media outlets, including Deutsche Welle in Germany which gave her a solid professional training. Last year she produced her first documentary movie. Mariya has a dream to make Ukraine a country where rule of law matters and freedom flourishes. She made a choice to be a journalist to have an impact and influence on the course of her country. During Project Arizona she interns at Arizona Talks which gives her broad range of opportunities to express her unlimited energy.

Man of multiple talents, always curious and seeking truth. Educated in Japanese studies, professional translator of this uneasy language. After getting his Bachelor's degree, he won the Japanese MEXT scholarship to study one year at the Kyoto University of Education, where he learned many subjects from the areas of language, psychology, political thought, and music. His dream came true but it wasn't enough. He also works as stage and vocal actor as well as vocal artist. Free market evangelist by calling. In his native Warsaw Krzysztof teaches high school students principles of sound economics. He also began his original project „Lessons of Economics for Catholics" in the parish he belongs to.  Eager to learn effective strategies of advancing freedom in Arizona. His internship is with the ASU Center for Study of Economic Liberty.

Andrea Hernandez (e-mail: otrabruni@gmail.com) from Mexico
BIO: Mexican flavor of Project Arizona! Andrea is very ambitious student from a vibrant capital of Mexico City where she is involved in number of organizations, including local group of Students for Liberty and Project Guelem. Holding Bachelor's degree in International Business, she aims to start Master's studies in International Public Administration at Harvard University (Yale is her second choice). At her University she was a founder and a General Secretary of the UN Model, helping Rother students to understood better the Mexican politics. She truly travelled the world with scholarships, going to as far countries as New Zealand or Iceland. What is really exciting, Andrea is currently writing a novel with liberty-centered core message. During Project Arizona she has not one but two internships: with Arizona Supreme Court Justice Clint Bolick and the Arizona Jewish Historical Society in downtown Phoenix.