Hour 2 - Ian Freeman (LRN.FM; Free Talk Live) on the privacy/security of Telegram (as an 'imposter' has been requesting bitcoin in Ian's name. Be watchful of this scam, or others that may pop up)

Danny Sjursen is a retired US Army officer and regular contributor to Antiwar.com. His work has appeared in the LA Times, The Nation, Huff Post, The Hill, Salon, Truthdig, Tom Dispatch, among other publications. He served combat tours with reconnaissance units in Iraq and Afghanistan and later taught history at his alma mater, West Point. He is the author of a memoir and critical analysis of the Iraq War, Ghostriders of Baghdad: Soldiers, Civilians, and the Myth of the Surge. Follow him on Twitter at @SkepticalVet. Also, https://www.fortressonahill.com/,

Danny's previous interviews on the Declare Your Independence with Ernest Hancock Radio Show: 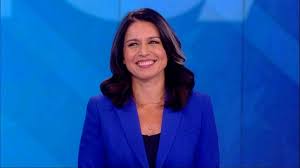 In Defense of Tulsi Gabbard

"The trouble [with injustice] is that once you see it, you can't unsee it. And once you've seen it, keeping quiet, saying nothing, becomes as political an act as speaking out. There is no innocence. Either way, you're accountable." —Arundhati Roy

Once again, Arundhati Roy—the esteemed Indian author and activist—more eloquently described what I'm feeling than I could ever hope to. After tours in Iraq and Afghanistan, a lifetime in the Army and burying several brave young men for no good reason, I couldn't remain silent one moment longer. Certainly not about the madness of America's failed forever wars, nor about domestic militarization of the police and the border, nor about the structural racism borne of our nation's "original sin." Still, most of my writing and public dissent has stayed within the bounds of my limited expertise: the disease of endless, unwinnable and often unsanctioned American wars.

At times it's been a decidedly lonely journey, particularly in the many years I remained on active duty while actively dissenting. I was, and remain, struck by how few of my fellow soldiers, officers and recent post-9/11 veterans felt as I did—strongly enough, at least, to publicly decry U.S. militarism. Then I discovered Tulsi Gabbard, an obscure young congresswoman from Hawaii who, coincidentally, serves in the Army and is herself a veteran of the war in Iraq. In the current climate of Gabbard-bashing, where even sites like Truthdig offer measured criticism, it's hard to convey the profound sense of relief I felt that someone as outspokenly anti-war as Gabbard even existed way back in 2016. She said things I only dared think back then; and as I did, she backed Bernie Sanders—a risky endeavor that likely doomed her to the recent slanderous accusations of treason by Hillary Clinton. That's called courage.

Perhaps the appropriate place to begin my qualified defense of Gabbard is with Clinton's outrageous—and unsubstantiated—assertion that the long-shot 2020 presidential candidate is being "groomed" by the Russians to run a third-party spoiler campaign in the general election. First off, Gabbard should seriously consider suing for libel. Clinton has veritably, and without a shred of evidence, accused her of treason, a crime that, due to Gabbard's continued military service, is punishable by death. This is no small matter.

This absurd accusation could usher in a new Red Scare, if there isn't one already underway—a frightful time in American history when almost anyone outside the hawkish Cold War mainstream consensus could be labeled a "Soviet asset" or Communist fellow traveler. Gay government employees, pacifists, leftist union leaders, anti-war activists and cultural bohemians, among others, were swept up in the conformist madness. Many were unable to recover their careers and reputations.

Hour 2 - Ian Freeman (LRN.FM; Free Talk Live) on the privacy/security of Telegram (as an 'imposter' has been requesting bitcoin in Ian's name. Be watchful of this scam, or others that may pop up)

Ravencoin is a peer-to-peer blockchain, handling the efficient creation and transfer of assets from one party to another.

Ravencoin is a protocol based on a fork of the Bitcoin code which adds features specifically focused on allowing tokens to be issued on the Ravencoin blockchain. These tokens can have whatever properties the issue of the token decides - so they can be limited in quantity, named and be issued as securities or as collectibles.

You can make your own security token within minutes and have it trade worldwide.

What Makes Ravencoin Different from Bitcoin?

The X16R algorithm intends to solve the centralization of mining seen on the Bitcoin blockchain caused by the introduction of expensive and highly efficient Application Specific Integrated Circuit (ASIC) hardware. By randomizing the order of 16 different hashing algorithms, Raven makes ASICs difficult to develop, allowing room for anyone to be able to mine the Raven network without the disadvantage of competing with ASIC hardware. The Raven team has also committed to change the hashing algorithms if a Raven ASIC miner is ever developed.

-Total coin supply of 21 Billion instead of 21 million.