Hour 1 - Richard Mack (Founder CSPOA; 'The Constitutional Sheriff') will be a speaker at the Red Pill Expo and the topic of his presentation will be on 'Civilian Disarmament & the War on Drugs'

Hour 2 - Ammon Bundy will be a speaker at the Red Pill Expo and the topic of his presentation will be on 'Has the West Been Won or has the Fight Just Begun?'

Hour 3 - Jerry Day (Filmmaker, commentator, expert on smart meters and 5G EMF radiation) will be a speaker at the Red Pill Expo and the topic of his presentation will be 'If You Can't Escape 5G, You Must Protect against It'

Author of several books on freedom, government and gun control

Sheriff Mack is best known for challenging the Brady Bill, a gun control scheme requiring local law enforcement to perform background checks on prospective gun purchasers. He maintained that the Federal Government had no authority to command local officials, and became the first sheriff in American history to sue the Federal Government (under the Clinton administration) and win at the US Supreme Court. The case was based on the Tenth Amendment, states rights and local sovereignty.

Mack is the son of an FBI agent and began his own law enforcement career as a street cop in Provo, Utah. After graduating from BYU in 1978, Mack became an officer with Provo P. D. He was soon promoted to corporal, sergeant, and detective. He spent one year as an undercover narcotics agent. In 1988, Mack moved home to Arizona where he ran for sheriff. He was elected Graham County Sheriff and served as such for eight years. It was during this time – in 1994 – that federal agents informed all sheriffs that they would be required to work for the Federal Government under the mandate of the Brady Bill, and Mack's court case began.

Since that landmark ruling Mack has written six books and appeared at over 175 Tea Party rallies nationwide. He has stood against the incursions of the Federal Government and has fought for civil rights from Hawaii to Bangor, Maine. He is the Founder and President of the Constitutional Sheriffs and Peace Officers Association (CSPOA) and was elected to the NRA Hall of Fame. 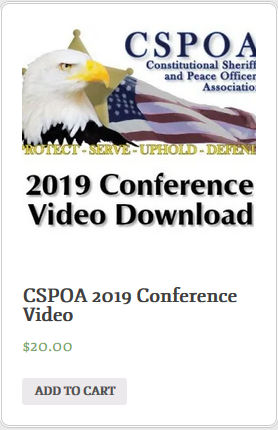 Video of all the speakers from the CSPOA 2019 Conference, held in Mesa, AZ on October 12

Over 3 hours of motivational, educational material focusing on real solutions, including talks from:

When you purchase this product, you will receive an email with a download link to a small text file.  Inside the file are instructions on how to download the HD video files in mp4 format, compatible with virtually all modern computers and mobile devices.

Hour 2 - Ammon Bundy will be a speaker at the Red Pill Expo and the topic of his presentation will be 'Has the West Been Won or has the Fight Just Begun?'

Son of Cliven Bundy, of the 2014 "Bundy Standoff" over grazing on federal land.
Red Pill Expo Presentation: Has the West Been Won or has the Fight Just Begun?

Ammon's previous interviews on the Declare Your Independence with Ernest Hancock Radio Show:

"If it Pleases The Crown... May I Occupy My Own Land?"

Cases share by Ammon with Ernest - No requirements or permits to exercise rights...

Hour 3 - Jerry Day (Filmmaker, commentator, expert on smart meters and 5G EMF radiation) will be a speaker at the Red Pill Expo and the topic of his presentation will be 'If You Can't Escape 5G, You Must Protect against It'

Red Pill Expo Presentation: If You Can't Escape 5G, You Must Protect against It

Jerry Day is an Emmy-winning Television Producer, Writer, Host and activist in freedom and rights issues. His web sites and YouTube videos have exposed millions of people to the hazards and harm caused by "advanced" electronic utility meters (some of which are called "Smart Meters"). He has produced hundreds of productions including television programs and pilots, commercials, corporate video programs, foundation and non-profit programs, highly technical surgical training videos, public service announcements, music videos, marketing and tutorial videos on a range of subjects.

With seven million views on his YouTube channel ("Minivanjack") including two million views on utility meter issues alone, Jerry follows the trends and technologies related to our the hazards and harm of non-consensual radiation-emitting surveillance technologies and he has taken thousands of calls to assist desperate utility customers with solutions to the problems caused by the new advanced utility metering such as house fires, unlawful surveillance, rapidly declining health from biologically harmful radiation and electric fields (EMF), and unlawful harassment and bullying by utility companies.

As a public service, Jerry responds whenever possible to provide links, resources and guidance based on his eight years of experience in researching and fighting harmful and unlawful utility metering.

By sharing information, Jerry Day has helped thousands of people discover electromagnetic radiation and EMF sources as the cause of their deteriorating health and to start finding solutions to restore that health. Our living spaces are now flooded with electromagnetic pollution and we all need to know more about these technologies in order to protect ourselves, our families, our future.

Privately, Jerry Day advises people in how to go "off grid" to reduce their living costs and live a more satisfying and sustainable lifestyle while denying revenue to corporations and agencies which harm the public and violate individual rights.