LIVE from FORKFEST 2020. Guests include:

"Goshe King" is the New Hampshire state director and coordinator for "Muslims for Liberty". Goshe is also the founder of libertarian party of Pakistan founded in 2010. Goshe occasionally writes for Muslims 4 liberty and other outlets. His most recent article about private police was published by "The Libertarian institute" at libertarianinstitute.org

Goshe has been living in New Hampshire since 2011 as part of the free state project movement and is very honored to be part of the FSP project.

We started logo-ing the LOV3 Bus: 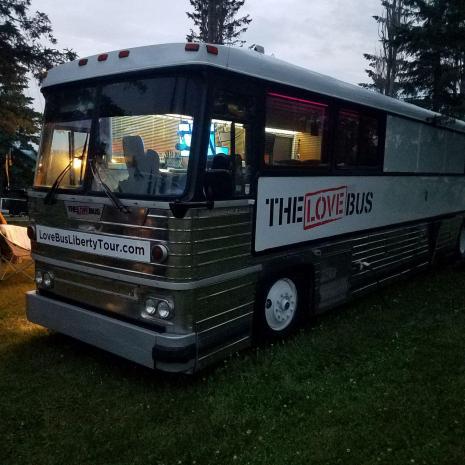 It was the 17th year for the Porcupine Freedom Festival in Lancaster, New Hampshire, held at the Rogers Campground. It was an unusually spirited, emotional, and powerful gathering this time, mostly because it took place in defiance of the fear-based culture that politicians and the media have been spreading for months. Hey, if Woodstock could take place during the Hong Kong Flu (which killed 100,000 Americans over the season), surely Porcfest should go ahead in the midst of whatever COVID-19 is.

Because of the lockdowns and mandatory closures, desolation and despair has swept through many areas of the country, with boarded up businesses, plexiglass separating people, and sadness all around. But here, for three days, all 400 or so of us got to experience something like what we might call the old world (meaning February and before): just happy people sharing ideas, eating, meeting, and enjoying themselves.

I'm sure that the organizers faced some pressure to call it off, but Carla Gericke looked past the propaganda and went ahead anyway. This year too was a bit different from usual, lacking some of the glitz and organizational formalism of the past. But we were no worse for it. There were talks on every aspect of health, economics, history, philosophy, commerce, crypto, firearms, COVID, and you name it. The main pavilion had something go on day and night, and there were mini gatherings all over the campground.

Most people camp but there are also cabins and hotels for people like me. Even then, there is no getting around the "roughing it" aspect of the conference. You don't know where your next meal is coming from: that entirely depends on what food trucks happen to be there. Everything is on a "bring your own" basis. The view of the mountains from the campsite are remarkable and strangely therapeutic.

In fact, the whole event felt a bit like therapy for a traumatized people. Families drove from very long distances just to have a taste of social life again, to be around people, to find out answers concerning what the heck happened in this now windswept country of ours. You could see the tragedy and hope in people's eyes. I had people I've never met break down in tears in my presence just from the happiness of the brief end to the isolation they've felt for months. The children were particularly thrilled to go without the muzzle for a few days and have friends with whom to run and play.

Phil Magness did a masterful presentation of his research on the failed history of coronavirus modeling. His focus was on the main proponent of lockdown: the now famous but daily discredited Neil Ferguson and his wild predictions of many millions dead. He more than anyone was responsible for setting off a bandwagon effect of lockdowns that came to the UK and the US, policies which had no significant effects on cases or deaths, wrecked the businesses and lives of millions, hollowed out hospitals with the banning of elective surgeries, and ended up distracting medical professionals from the one thing they could have done to have reduce the death toll: focus on the nursing homes that accounted for 43% of American deaths.

Maricopa County Superior Court: Fitness centers must be given opportunity to apply for reopening

"No V" - US Factory Orders Rebound Slows In June