An Anti-Virus Pioneer and Privacy Advocate, John comes on the show to talk about his recent arrest, lockdowns/mask mandates, is coronavirus a hoax??; precious metals market; cryptocurrencies, etc…

1. John McAfee's 'arrest' over thong face mask was all a hoax

Proof of Stake privacy coin to help make you nothing but a "ghost" when transacting online!

You can earn staking rewards by securing the network. It's that easy!

How is GHOST created and distributed?

In the beginning, 12 new GHOST tokens are minted each block (every 2 minutes).

2. GHOST are split between Ghost Veterans.

6 GHOST are split between Ghost Veterans.

3. GHOST is awarded to the staker.

4 GHOST are awarded to the staker who mined the block.

2 GHOST goes into a pool used for future Ghost development and growth.

How to get GHOST rewards

You can earn GHOST by staking, which allows you to share in the fees generated by the Ghost blockchain. Staking has no minimum coin requirements.

We wanted to put together a timeline in order to showcase the last 45 days. This timeline brings to light the full progression of Ghost and what we've been able to achieve thus far. As we continue down this path together, we will follow the vision for Ghost, that vision is about building a truly private and decentralized network with real world use cases and adoption.

As the ongoing process from ERC-20 Ghost to mainnet swap continues we are very focused on securing exchange listings, wallets, and other partnership opportunities for Ghost mainnet. Have patience and be rest assured there are internal discussions happening right now.

Stay united with us as we execute on all of our promises made in the whitepaper and carve our path out in the privacy coin space.

May 25 — Ghost airdrop to ESH holders.

May 26 — Exchanges like bitcoin.com, hoo, stex and more complete the airdrop and start trading GHOST.

June 7 — Ghost becomes the biggest volume on IDEX and Uniswap.

June 26 — Over 5 million Ghost were swapped to the Mainnet.

June 30 — Ghost obtains the #9 spot in popularity by coingecko, with a 94% positive public opinion.

July 5 — Over 7 million Ghost were swapped to the Mainnet.

July 6 — Ghost beats DMG and COMP and won popular vote 66.7% to be listed on Vision App

We will be covering the ongoing developments happening behind the scenes for several amazing products and services we've been working on and plan to release in the future on another Medium post. TOPIC(S) COVERED ON THE SHOW:

1. For those of you who went to June's Cafe in Heber, AZ while at Jackalope Freedom Festival...

Ernest Hancock (Host of the Declare Your Independence with Ernest Hancock Radio Show) had Tracy Packer (Owner of June's Cafe in Heber, AZ) on the show - Hour 2 to discuss why she decided to go against the mask mandate for her business and the issues that followed. As mentioned on the show, if you would like to order a 'June's Cafe' coffee cup, please follow this link. They are now available to order. It will take you to their menu page that they set up so they could fulfill take-out orders during the covid lockdown. The coffee cups are listed at the bottom left of the menu (it will say 'Shipped Coffee Cups'). More than getting this coffee cup, it is a show of support for Tracy and her family who went against the Arizona governor's mask mandate (see story below)...

While camping in Baca Meadows (site of the Jackalope Freedom Festival), which is 13 miles from June's Cafe in Heber, AZ, we were made aware that the cafe had a sign posted that they and their employees do not wear masks (as mandated by the county/state). So we wanted to support their efforts at resisting the mandate, and visited their cafe several times during our trip...Here are some signs posted on their front door: 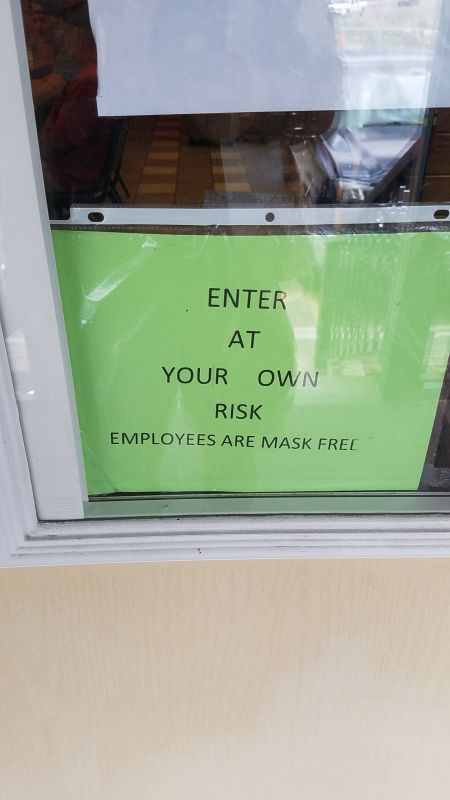 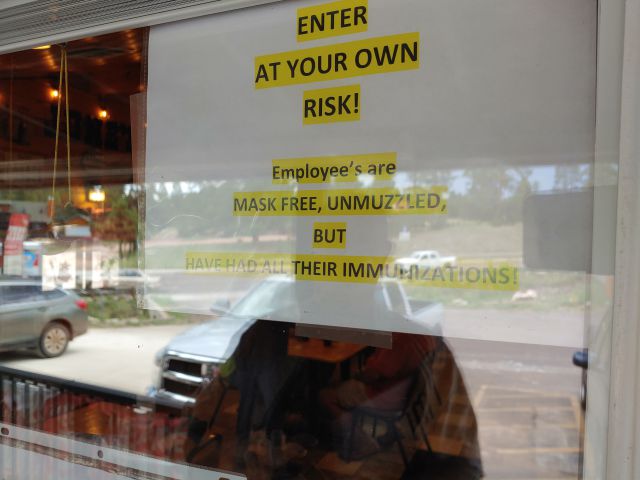