Across the street from the Mines is The KOA Resort, situated on the West Canada Creek. The Herkimer Diamond Mines KOA Resort was named Campground of the year in 2010. ?

??A devastating fire in October 2017 destroyed the historic barn that housed our Registration, Gem Store, Activity Center and Mu?s??eum.

In 2018, we began a new chapter in our history with the launch of Miners' Village. This improvement will serve the next generation of Miners for years to come!

We invite you to visit and explore this incredible place and prospect for the magical crystals that ?have world-wide acclaim!

?1. What Should We Bring?
We suggest that you come prepared with safety eye wear, gloves and closed toe shoes. You may also bring any additional equipment that you find necessary, such as chisels, screens, small shovels, buckets, and other hammers (up to a 12 lb sledge). We recommend to dress for the weather and bring sunscreen if necessary.

2. What are Herkimer Diamonds?
Herkimer Diamonds are beautiful double-terminated quartz crystals found in Herkimer, New York.  Incredibly, these phenomenal gemstones are close to five hundred million years old.  The crystals are magnificent works of nature, found in the rock, having a diamond-like geometrical shape.  Thus, the name recognition of "Herkimer Diamonds".

3. How are Herkimer Diamonds different from other diamonds?
Herkimers rival true diamonds.  A true diamond found in the rough is exactly that, a rough appearing glass-like stone.  The true diamond must be painstakingly cut by man to give it smooth faces and a geometrical shape.  On a hardness scale, a true diamond scores a ten.  Herkimer Diamond quartz crystals falls at a 7.5 on the scale, giving the real diamond a close race.  They are naturally faceted, each having eighteen facets and 2 points.

4. How were Herkimer Diamonds formed?
The bedrock in which the quartz crystal are found began forming approximately half a billion years ago in a shallow Cambrian Sea that lapped against the southern shores of the ancestral Adirondack Mountains.  The sediments (calcium magnesium carbonate) which slowly accumulated beneath the sea's salty waters were gradually compacted under the weight of thousands of feet of additional sediments, forming the rock strata Dolostone.  While still beneath the sea, water seeped through the pores of the rock often creating "vugs" by dissolving part of the rock.

5. What are the collection methods?
The collecting methods range from casually looking along the prospecting area, digging through the rubble energetically, using crowbars, sledgehammers and heavy chisels.  The most popular tools are a 2 to 3 lb crack hammer and a bull point chisel.  The most popular method of prospecting for loose Herkimer Diamond quartz crystals is by breaking them out of a single rock.

6.  What is pocket mining?
Domed pockets mining in the table layer of the rock is usually very rich with diamonds.  Some pockets are known to contain thousands of diamonds.  Pockets or cups can be up to six feet in diameter and usually no less than one foot.  The dome-like tops of the pockets are often lined with small, white cubic shaped dolomite crystal.  Occasionally, the top will be beautiful black drusy quartz.  Pockets containing diamond crystals are never the same either in size or in quality.  Most pockets, as a rule, will contain diamond crystals of various sizes.  Some pockets may contain large crystals ranging in size from two to eight inches long and three to four inches wide.  Other pockets with medium sized crystals range in size from an inch and a half to three to four inches long and a half-inch to two inches wide.  Micro crystals are always found.  As the crystals move up in size they tend to become less clear or more translucent than transparent.

7. Are there special Herkimer Diamonds?
Some crystals contain anthraxolite or decayed plant life.  The anthraxolite resembles bits of black coal within the crystals.  A special discovery would be an enhydro crystal.  These special specimen are crystals that contain a water bubble within it.  An extremely lucky find is an enhydro which contains species of anthraxolite floating in the water bubble.  Twins, double, clusters, tabulars, smokies, skeletals, and phantom crystals are all valuable specimen found in pockets?.

9. Can you be of any age to prospect?
We welcome miners of all ages, but we request that children under the age of 16 be accompanied by an adult in order to keep your experience enjoyable and safe. 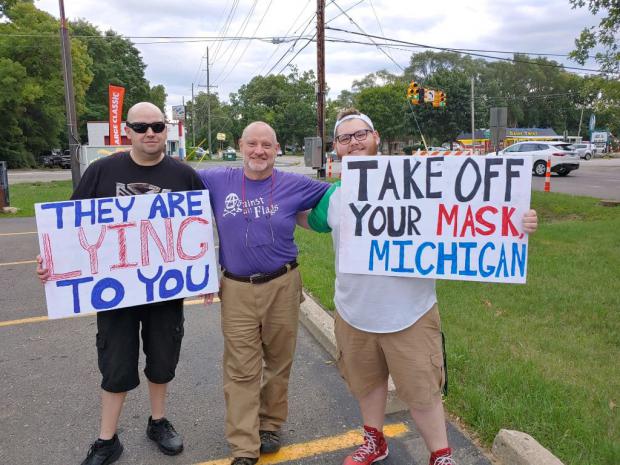 Referenced on the show

These young men decided they had enough with the face masks, and did something about it by making their own homemade signs and standing on a street corner in Commerce Township, MI. We had just set up sign-making production down the street less than four blocks away, then we left to go to our camping spot for the night and we saw them and got out to introduce ourselves and what we are doing on this tour. Others honked and stopped by to voice their support. They were very excited, and they will be on the show tomorrow morning and will help make and distribute signs tomorrow and this weekend as part of the Love Bus Liberty Tour (www.LoveBusLibertyTour.com). They reasoned that this whole covid, tracking, and tracing thing is evolving into ID cards, and they were of the opinion that the whole covid-mask thing is a hoax and they wanted to share their opinion. We will hear it straight from them tomorrow morning.

In the wee hours, we (Alex and James; Ric Curp and Donna Hancock) put up the signs around Oakland County (MI): 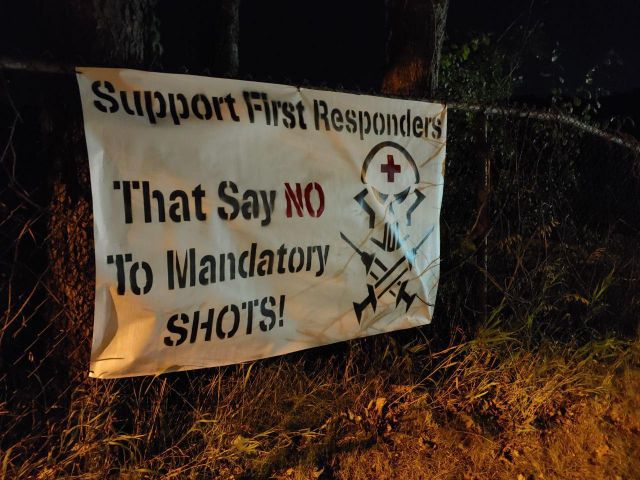 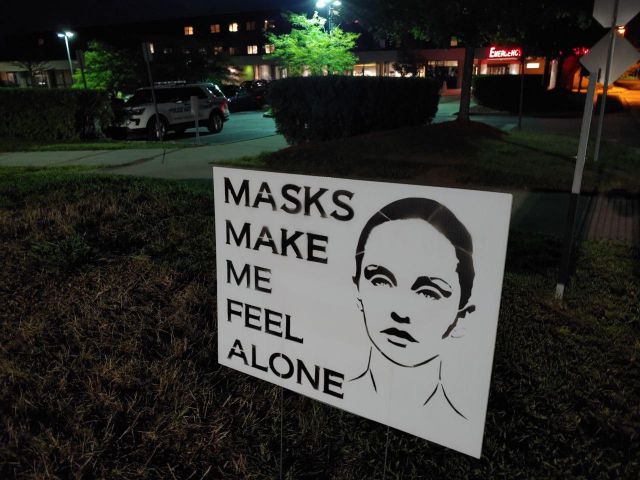 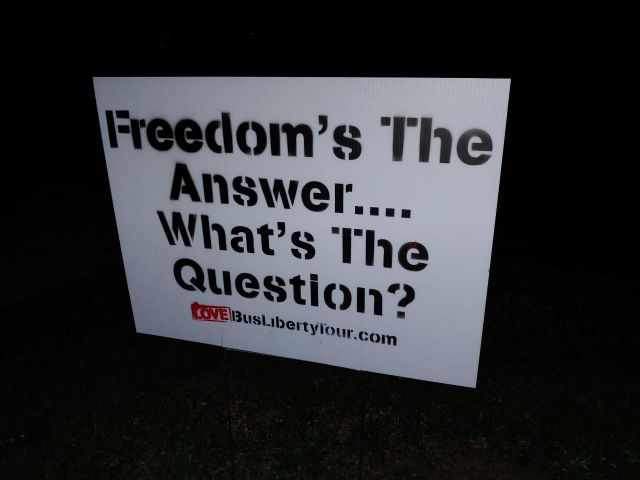 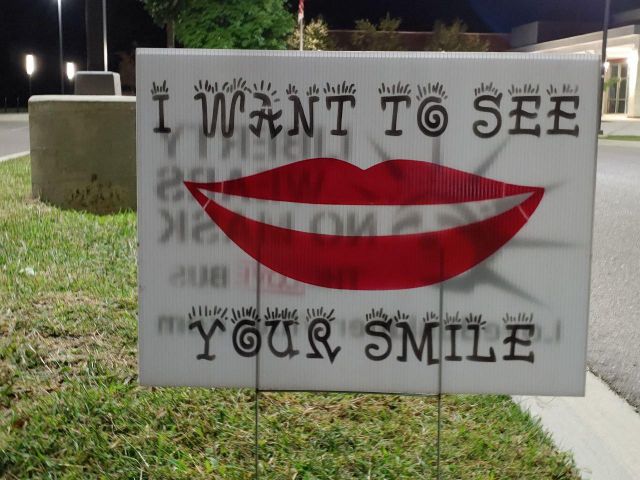 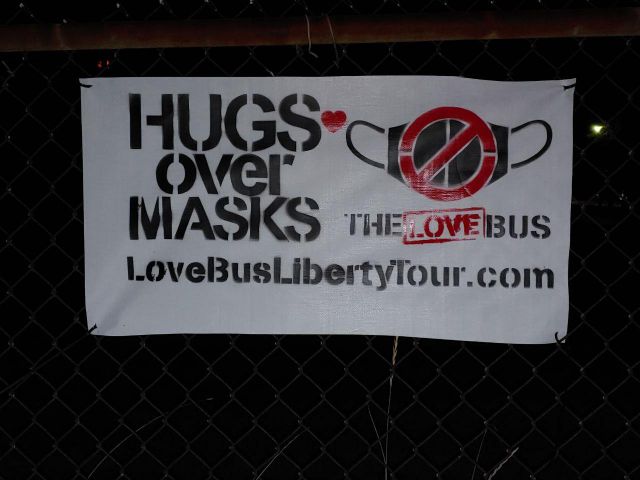 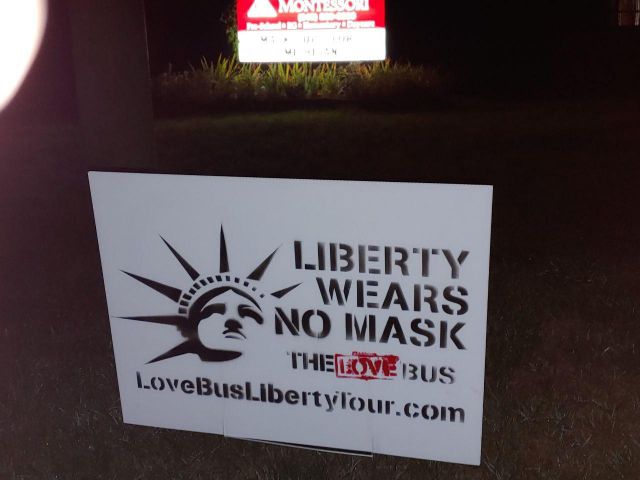 ...and some of the activists wanted to make this sign to put up as well: 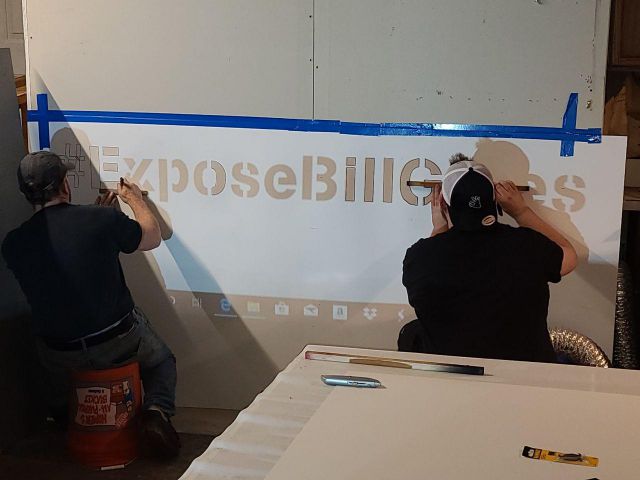 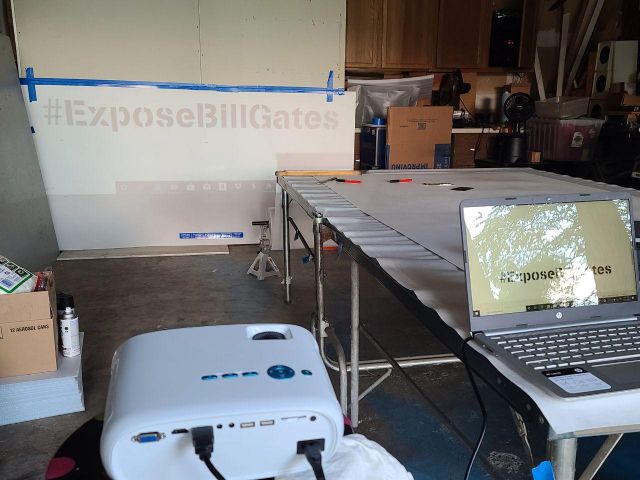 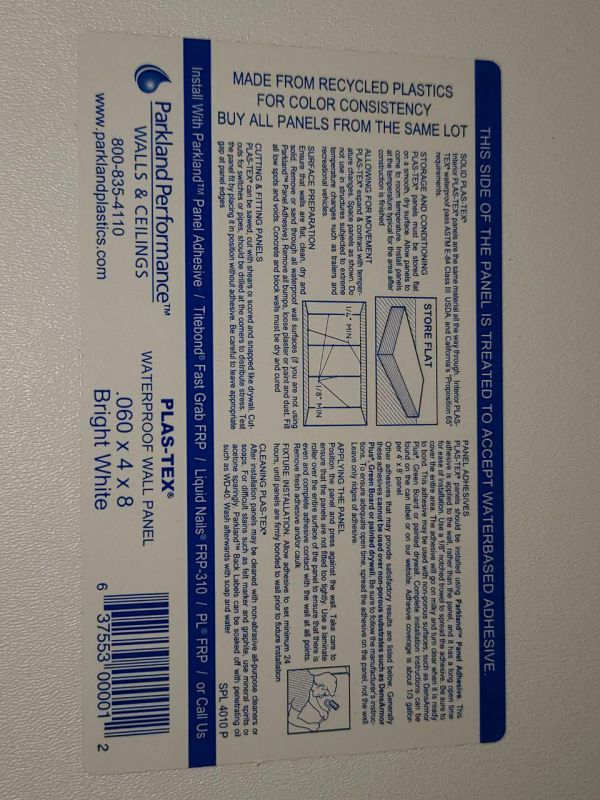 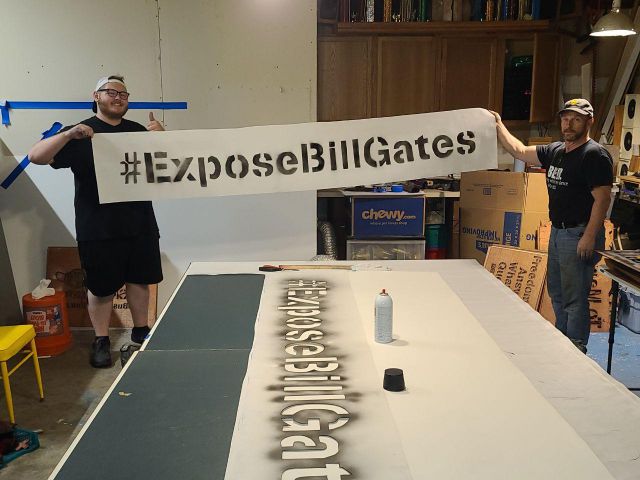 Sign making production! These signs will be put up all over Oakland County (Michigan), which includes Commerce Twp: 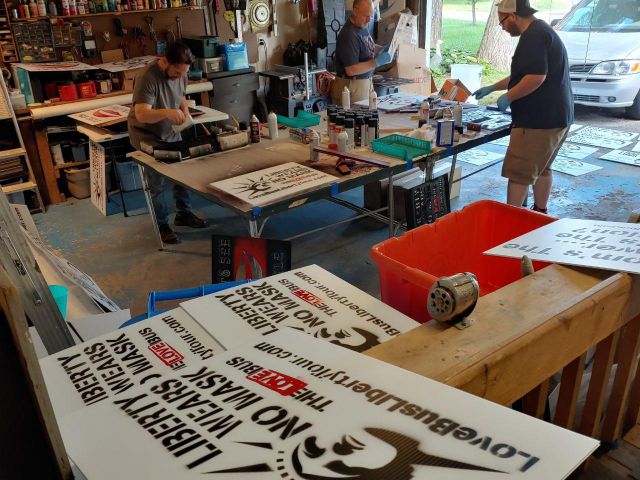 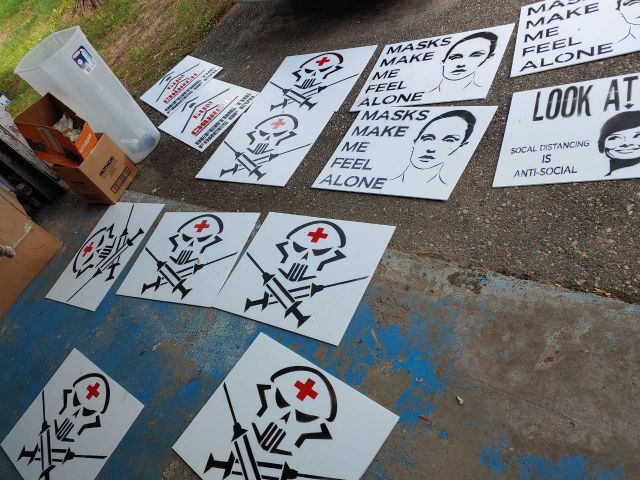 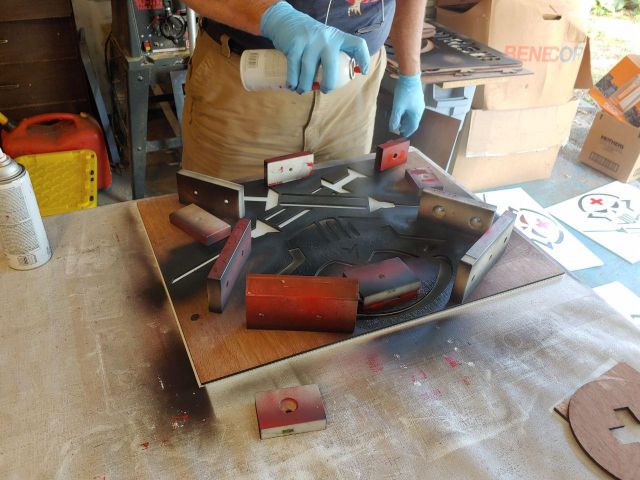 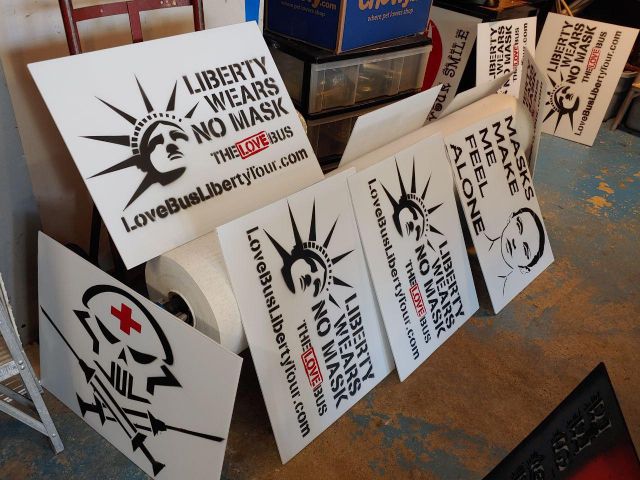 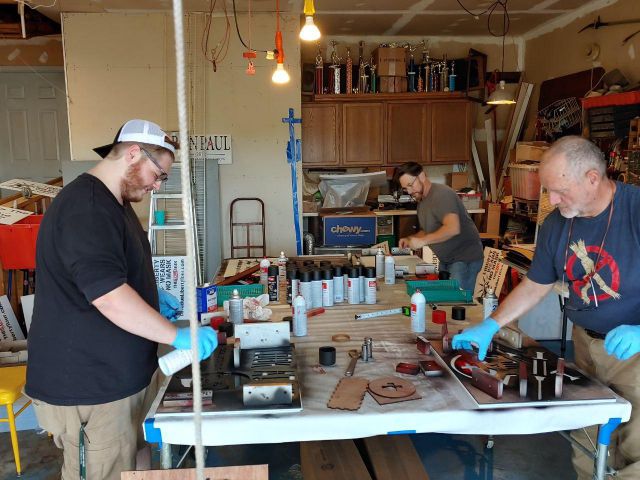 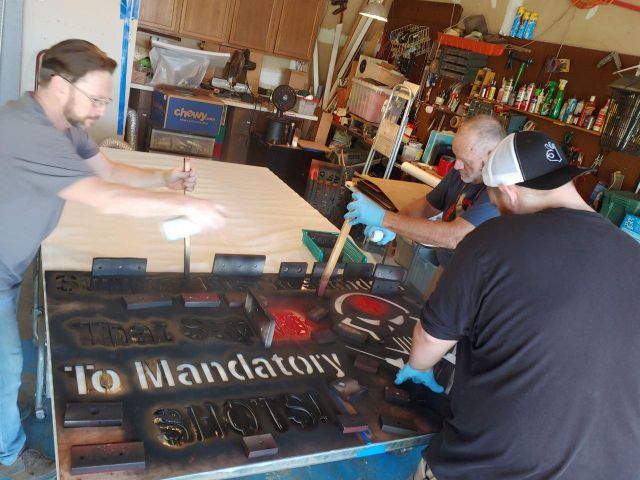 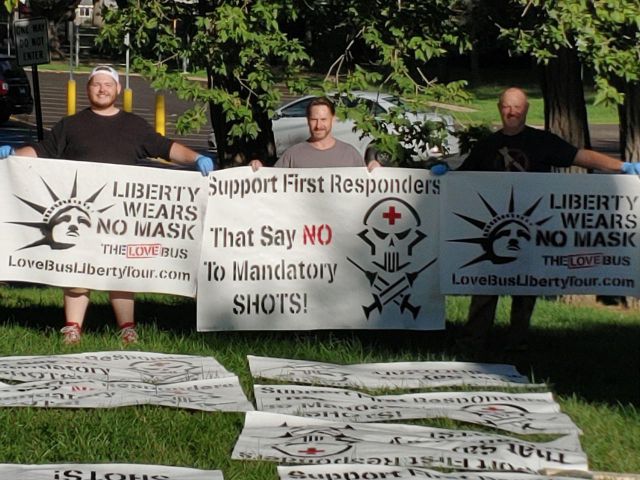 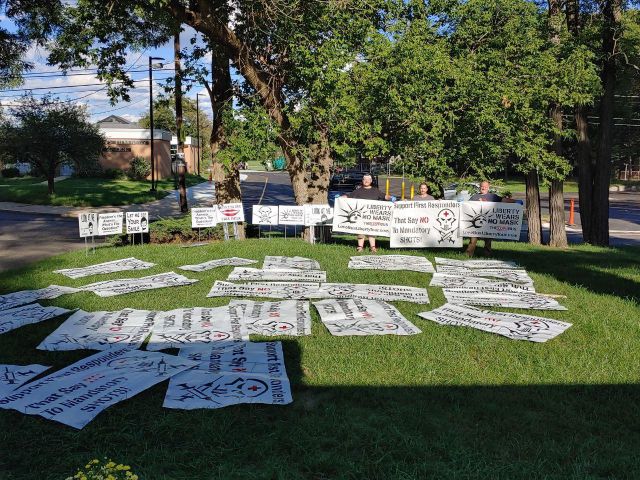 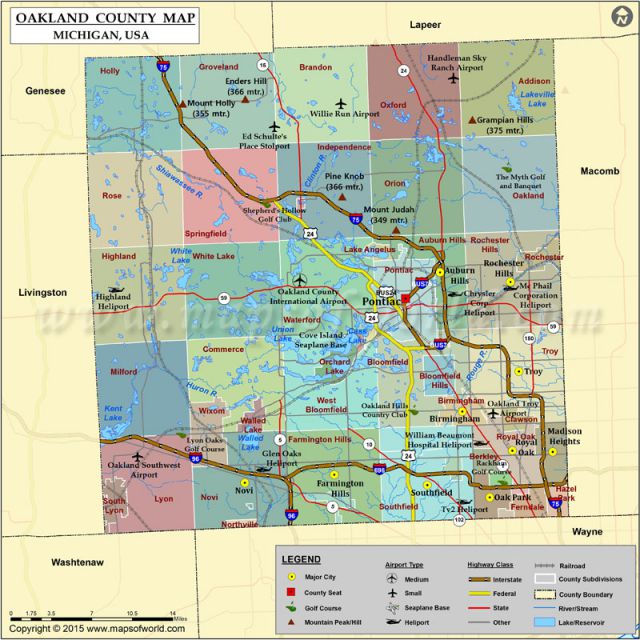 Ernest recaps the LOVE Bus Liberty Tour, now in Herkimer, NY at the Herkimer Diamond Mines; Goes over the headline news on Freedom's Phoenix...Matt White (Trive.News) and Dave Austin (Alderman from Vermont) come on the show to discuss the corruption in Vergennes, VT