Gerald Celente, who developed the Globalnomic® methodology to identify, track, forecast and manage trends, is a political atheist. Unencumbered by political dogma, rigid ideology or conventional wisdom, Celente, whose motto is "think for yourself," observes and analyzes the current events forming future trends for what they are — not for the way he wants them to be. And while Celente holds a U.S. passport, he considers himself a citizen of the world.

Gerald's previous interviews on the Declare Your Independence with Ernest Hancock Radio Show:

Hour 2 - Charles Goyette (Author, Commentator) comes on the show to talk about the economy, his recent book, The Last Gold Rush

Charles Goyette is the author of the New York Times bestseller The Dollar Meltdown and Red and Blue and Broke All Over: Restoring America's Free Economy.

A former Phoenix radio talk-show host, he appears on many national television talk shows. He has contributed to LewRockwell.com, the Daily Reckoning, and AntiWar.com, and has written for the American Conservative, CNBC, WorldNetDaily, and TheStreet. His new book, The Last Gold Rush…Ever!: 7 Reasons for the Runaway Gold Market and How You Can Profit From It (Oct 27th, 2020) is available on Amazon now. He lives in Scottsdale, AZ.

The Last Gold Rush…Ever! makes a powerful case that the US dollar and the global monetary system are headed for a world-changing crisis, describes the ways it will unfold, and explains why owning gold is a vital means of protecting yourself, your family, and your wealth.

If you had foreseen the financial confusion of the Carter years, or the exploding debt in the Bush years, or the Federal Reserve's "money printing" spree during the Obama presidency, you might have profited richly from the resulting bull markets in gold and silver.

But today's governmental recklessness dwarfs each of those episodes. Add other accelerants to the dollar and debt crises—including currency and trade wars, an unaffordable military empire, and a juggernaut of domestic state socialism—now converging to fuel an era of monetary destruction that will drive gold prices to unimaginable heights.

In this unique collaboration, two gold experts—New York Times bestselling author Charles Goyette, with years of commenting and writing about gold, the dollar, and the economy from outside the industry, and Bill Haynes, with decades of trade-by-trade, tick-by-tick experience inside the precious metals markets—triangulate their views to prepare readers for The Last Gold Rush…Ever!

David Stockman on "The Last Gold Rush… Ever!"

"US living standards are about to be squeezed as never before!"

That is the warning from former Morgan Stanley chief economist Stephen Roach.  He forecasts a 35 percent decline in the dollar by the end of this year.

My co-author Bill Haynes and I make a similar warning in our new book The Last Gold Rush… Ever!

But don't let the title fool you:  It's not about prospectors or the discovery of a new motherlode somewhere.  Instead, The Last Gold Rush… Ever! is about the end of the US dollar in its present iteration.  It is a deep-dive into the factors now converging to drive gold prices to heights that will dwarf bull markets gone by.

In a powerful forward to our book, David Stockman begins with his time as President Reagan's budget director to review the politics of plunder that make a calamity for the unprepared not merely possible, but inevitable.

The following is a brief excerpt from Stockman's foreward to The Last Gold Rush… Ever!:

America's now crumbling empire of debt, like Rome itself, was not built in a day.

On October 1, 1982, day one of President Ronald Reagan's first full budget year, I told the House Budget Committee that if fiscal sanity was to prevail, they were doomed to spend the rest of their careers cutting spending.

After years of Lyndon Johnson's Great Society and Nixon-Ford welfare programs that sought to outdo LBJ, it fell to me as the director of the Office of Management and Budget to explain the facts of economic life, even—and perhaps especially—to old Washington hands.

"There is no final vote," I warned. "Twenty years of history aren't going to be corrected in twenty weeks."

In fact, as I soon discovered, nothing at all was going to be corrected. That year's deficit broke for the first time into what in the "billion here, billion there" era we called triple-digits: more than $100 billion. In fact, it didn't just break into triple-digit territory. It crashed right through, rolled over a few times, and landed in a ditch. That year, the deficit totaled $128 billion.

At the same time, the gross national debt surged past a trillion dollars. By the time I left Washington for Wall Street a few years later, I hoped only that catastrophe could be avoided.

But fiscal sanity did not prevail; now, in the brave new world of $3 trillion and $4 trillion deficits, America is being turned into a coast-to-coast soup line.

Of course, the debt couldn't have grown to such gargantuan proportions in a sound money environment. Nixon's taking the US off the gold standard eleven years earlier was the enabling act for the massive monetary corruption and money-printing spree that would follow at the hands of Keynesian icons at the Federal Reserve: Greenspan, Bernanke, Yellen, and now Powell.

The Last Gold Rush…Ever! aptly identifies these as among the "Deep State Money Manipulators." Under their guidance central banking became the tool of a vicious form of crony capitalism and money politics. So that today the economy has become utterly dependent upon the central bank's printing press, the bipartisan fiscal regime of perma-deficits, and the military-industrial complex that bolsters what remains of the manufacturing sector….

On the White House lawn, the administration warmed up the helicopters of monetarist lore to drop wads of cash directly into the accounts of the people. Of course, that had to be a part of the plan this time around. Frédéric Bastiat provided the taxonomy of plunder a long time ago: The few plunder the many; or, everybody plunders everybody; or, nobody plunders anybody. 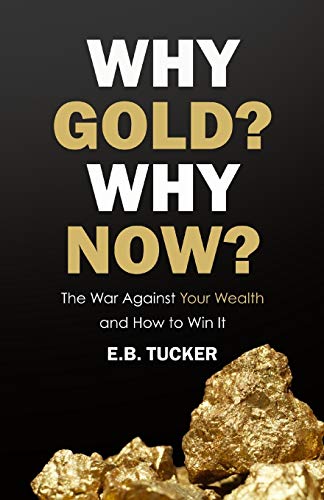 Nobody plunders anybody doesn't stand a chance. And while the few plunder the many has been the Washington way, growing resentment of the 1 percent, Occupy Wall Street, Antifa violence, and the energized socialists Sanders, Warren, and Ocasio-Cortez mean fresh plunder initiatives have to provide Free Stuff for everybody. If the Fed can print money for Wall Street, it had damn well better be ready to print some for everybody next time. ("Sure, throw them a scrap," say the cronies, knowing full well that in the financial casino the odds always favor the house and that it's worth a few crumbs just to keep the rubes at the table.) The socialist warriors' fondest hope for a windfall notwithstanding, "helicopter money" is only the next economically imbecilic step along the pathway of the Bush-Bernanke bailouts that Bastiat foretold: the plunder of everybody by everybody, an endgame provision that launches a war of all against all.

The Last Gold Rush…Ever! provides the essential orientation you need for the endgame upon which we have embarked. Washington and the Fed are in the process of putting the coup d' grace on capitalism and sound money, so if you are to be prepared to protect yourself and your family, nothing could be more timely than this book.

One more thing. Authors Charles Goyette and Bill Haynes have detailed how Keynesian central banking has poured the kerosene that ignites the debt inferno. But they don't stop there. They describe a series of accelerants—trade and currency wars, a war on cash, a new Washington enthusiasm for the deprivations of socialism, waning worldwide dollar hegemony, and the demise of America's global military empire—that will make this bonfire of calamites burn hotter, the dollar lose value faster, and the gold price race higher than those who fail to read this book might ever suspect.

The Best of Charles Goyette

The Next Logical Step

Find me a Democrat that would say this today...