Join-Us | Log-In
Freedom Forum | Translate
Jeff Metrick (Libertarian for Congress in Arizona's 6th Congressional District) comes on the show to talk about his campaign - Roger Agora (Met at MidFest; For a New Libertarian) on Private Law and Counter Economics/Black and Grey Markets (MP4)

Hour 2 - Roger Agora (Met at MidFest; For a New Libertarian) on Private Law and Counter Economics/Black and Grey Markets (MP4)

I was born in a  town called Staunton, Illinois and lived there until I enlisted in the United States Army at the age of 18. I wanted to serve my country and make a better life for myself. When I got out of the Army I helped take care of my father who was having a battle with colon cancer. In 2007 I got accepted to Western Illinois University and graduated in 2011 with a Bachelor degree in Political Science with minors in History and Economics. During my time at Western Illinois University I served as the Director of Government Relations for the Student Government Association. I also became the first Caucasian student to join a historically black Greek letter organization named Iota Phi Theta at Western Illinois University. I became the president of the chapter in the fall of 2010. When I graduated from college I returned to my hometown and started taking care of my father who was in the final stage of cancer. In 2012 I lost my father and  then moved to Chicago in 2013 to start anew. In Chicago I worked for Uber and started a business that helped veterans by donating 10% of gross sales to Operation Homefront. In 2020 I moved to Phoenix, AZ and started making YouTube videos about Libertarianism. I look forward to serving the great people of the 6th Congressional district. https://www.winwithjeff.us/

Freedom, Liberty And Justice For All

Freedom, Liberty And Justice For All. These are the core beliefs that every American holds to be true. Holding these beliefs allows people to pursue the American Dream of Life, Liberty, and the Pursuit of Happiness.

4 ways to help all people achieve the American Dream.

The Second Amendment- to the Constitution of the United States guarantees the right of people to keep and bear arms. I will oppose all laws that come up that infringe upon the rights of people.

Immigration Reform- A complete overhaul of the immigration system so the best and the brightest can come here and live the American Dream.

Economic Reform- eliminate overburdensome regulations so people can create and run companies without undue cost, reform tort laws so companies of all size do not have to worry about frivolous lawsuits that cut profit and cost people their livelihood. Reform tax laws so that you can keep more of your hard earned money.

These are the issues that people who love Freedom, Liberty, and Justice for All believe.

We currently have a Congress and President who mean well with wanting to protect people, but taking away gun rights and doing so by executive order is not the way to do it. When I'm elected to represent the people of my district, I will vote against any bill that would take away our basic right to self-defense.

The Immigration system in this great country is broken and needs to be fixed so the humanitarian crisis at the border can be solved and not happen again.

Reform the Visa System: Visa reform is a topic most people can agree on. We need away to make it faster and easier for people who are the best and the brightest to get here.

Marriage Reform: When someone comes to this country illegally and marries a US citizen, they should be able to get citizenship in short order and not have to wait years to get one.

Secure the Southern border: A country cannot exist without borders. We need to have a secure boarder. A secure border would include physical barriers, electronic barriers, and a streamlined system for processing people.

Criminal Justice Reform is a broad topic. The issues below are important to people across my district and across this country. They impact everyone.

Drug Law Reform: What someone chooses to put in their own body voluntarily is no business of the state unless it affects other people, or the  person cannot fulfill their obligations. I would propose a bill at the Federal level to declassify marijuana as a schedule one narcotic and allow it to be used for both medical and recreational purposes.

Civil Asset Forfeiture: Civil Asset Forfeiture is a process by which law enforcement officers take assets from persons suspected of involvement in a crime or illegal activity without necessarily charging the owner with wrongdoing. I would propose a bill to ban the use of this procedure. The only way that it would be allowed is if the person were convicted of a victim crime not a victimless crime.

Economic Reforms are vital for creating generational wealth and enabling the great people in my district and in this country to live the American dream.

Over Regulation: Has stopped a lot of people from starting a profitable business for their family and their heirs. We need fewer regulations so that business owners can hire more people. A good example of this is prohibitive health care requirements.

Tort Reform: must be implemented on a federal level. This will help businesses of all sizes from being sued for something over which they have no control. I would propose a bill stating that  if there was no malicious intent, a suit could not go forward.  Lawsuits can cost people their jobs and businesses money.

Tax Reform: We need to simplify the tax code so that people can keep more of their hard-earned money. I would propose a bill that would make taxes quite simple. I would oppose any type of tax bill that would go after wealth. As a country need to learn to live within our means.

Hour 2 - Roger Agora (Met at MidFest; For a New Libertarian) on Private Law and Counter Economics/Black and Grey Markets (MP4) 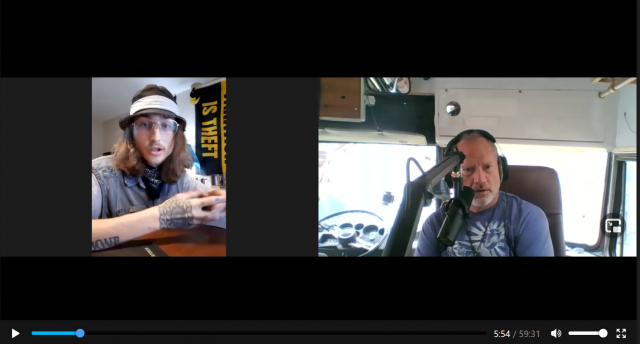 Roger Agora aka Gnostic.Individualist been an anarchist, activist and truther since 2017, being born in 1997 Roger has been passionately exposing truth, lies, and the state since the young age of 19. Over the course of these last 5 or so years, Roger has ineptly studied subjects such as gnostic and hermetic spirituality, neoplatonic cosmology, alkaline herbalism / naturopatic medicine, etymology, historical revisionism, philosophy, commerce, privacy, public law / private law and counter-economics. To push forward these ideas, Roger has developed the websites RajahHerbalRemedies.com for alkaline herbalism and natruopathic medicine, and then ForANewLibertarian.com for a wide range of topics and intentions all surrounding the ideas of anarchism, privacy and counter-economics.

Here at For A New Libertarian, we are dedicated to pushing forward the works Samuel Edward Konkin III & Murray Rothbard. Our intention is liberty, for ALL. As the Anti-Federalist Thomas Paine once so eloquently said;

"He that would make his own liberty secure, must guard even his enemy from oppression; for if he violates this duty, he establishes a precedent that will reach to himself.".

There are only two types of people in a market, producers and parasites. This is because the two types of means of making money, the economic means and the political means. The economic means is how most of us survive. Peaceful human action, aka voluntary exchange. Barter & trade. The political means of making money is not based on the market (voluntary exchange) but rather the State (coerced exchange). It is everything from the police officer (policy enforcer) whom gets paid of state coerced taxation, to the state-capitalist whom pays a senator to pass legislation. All those who use state power to make money (survive) are parasites on the market, and in turn all human action.

We will never create a free society through statist parasitic & coercive means.

As free people seeking a free society, we must do as much as free men & woman! Live free today! Understand you derive your rights from God & from Nature! No positive law has ever granted man anything but privileges within a control grid! 'Give me liberty or give me death' is not a compromising statement!

Moving forward, we must establish a New Libertarian Alliance set on securing our free societies, NOT through political means, but rather economic means. Counter-economic means.