Hour 3 - Steve Neil (a friend already living in a state of preparedness) comes on to talk about energy, solar, self-sufficiency, etc...

Dan Titus formally known as Dan the Smoothie man, hung up his political shingle  in November 2018 and got pulled back into politics in the summer 2020 during the riots. His main issue is California climate change law and how it impacts the nation. He has been writing about UN climate agendas for the past 16 years.

He is promoting this campaign to expose the infrastructure bill:

*
Dan's friend Arthur Schaper had the FBI  show up at his door last week asking about January 6.

*
[Here is the bus used in SoCal for the RP campaigns.]

The Biden administration and congressional Democrats are seeking to pass a radical "climate change" bill – disguised as an "infrastructure" bill – that would codify the Paris climate agreement and the Great Reset. 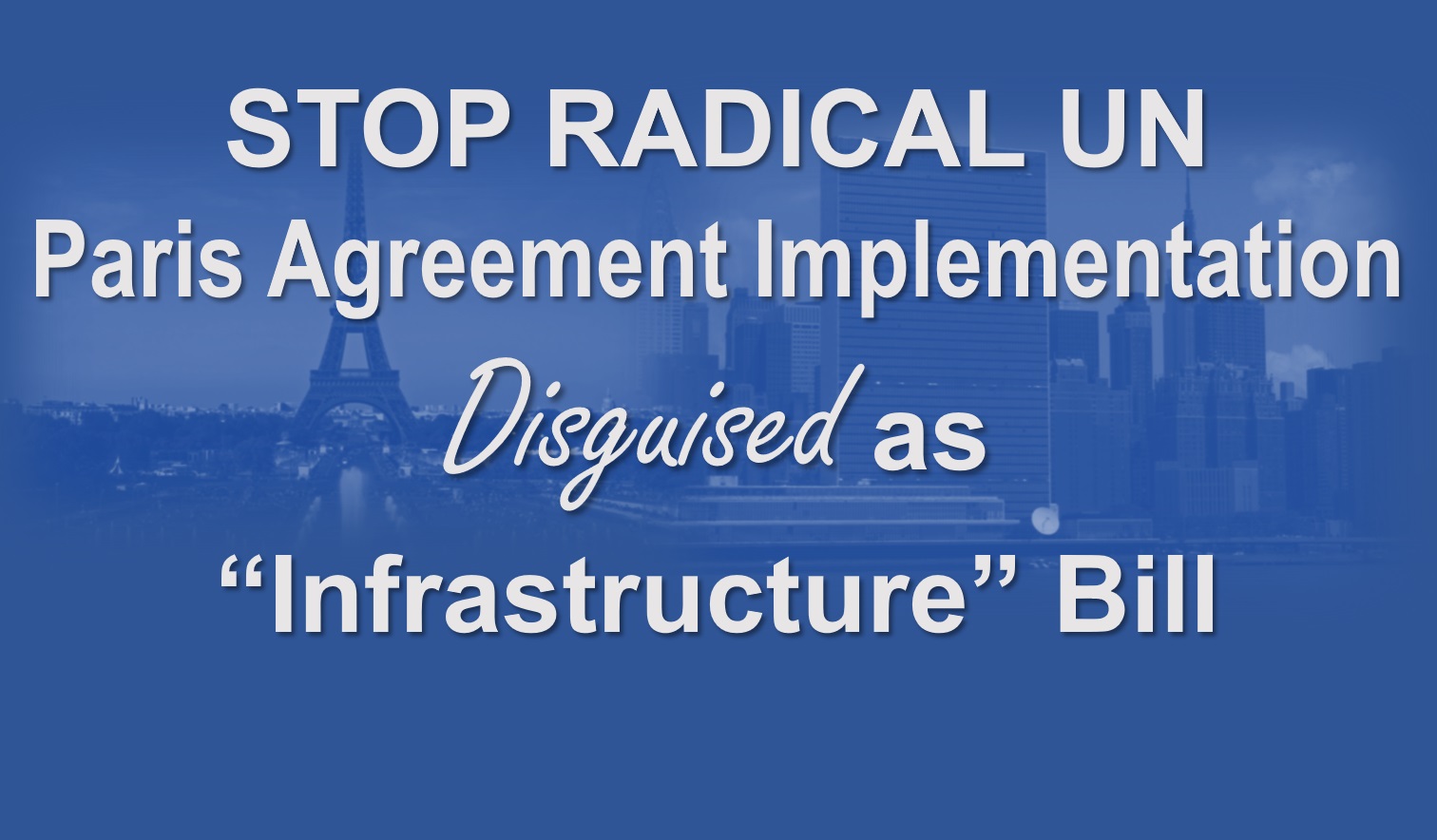 Joe Biden, his administration, and congressional Democrats are seeking to pass a radical "climate change" bill – disguised as an "infrastructure" bill – that would codify the Paris climate agreement and the Great Reset.

On March 31, 2021, the Biden White House unveiled its so-called "American Jobs Plan." This plan is estimated to spend about $2.5 trillion and would raise an estimated $2.75 trillion through record tax increases. While advertised as an "infrastructure" plan, only 5% of the funds would actually go to roads and bridges, and even if one takes an expansive view of "infrastructure," only 25% of the plan would fund such projects.

Where will the remaining 75% of the funds go? They will be used to advance a far-left environmental-Marxist agenda that would codify the Paris climate agreement and the Great Reset into U.S. federal law.

Environmentalists recognize the plan's potential to implement their agenda. According to the left-wing Atlantic magazine:

If you want the United States to act at a national level to fight climate change, this bill is it. This is the climate bill.

First, the plan calls for "100 percent carbon-free electricity by 2035" and "net-zero emissions by 2050." The plan's provisions are all designed to meet these goals; to achieve this, a radical government-mandated restructuring of the American economy would occur. In other words, the Paris climate agreement would effectively become American law, and the United Nations would be in the driver's seat of U.S. domestic policy.

Among other provisions, the plan would spend $10 billion to create a "Civilian Climate Corps," which would implement the Biden administration's climate projects, and $35 billion for climate change "research." It would spend another $174 billion on electric vehicles, including to electrify all federal vehicles and at least 20% of school buses. Additionally, the plan would spend $700 billion on subsidies and tax credits for "green" energy, even as it ends all subsidies for the so called "fossil fuel" industry – thus rigging the U.S. economy in favor of environmentalist policies.

This climate change agenda stretches into housing. Biden's plan would spend "$213 billion to produce, preserve, and retrofit more than two million affordable and sustainable places to live." It would also seek to abolish local zoning rules – including "minimum lot sizes" and "prohibitions on multifamily housing" – that preserve the quality-of-life in communities. In other words, Biden's plan is consistent with the Great Reset's goal of mass urbanization and driving individuals out of rural or low-density areas.

The numerous other provisions in Biden's plan include "$400 billion for care for the elderly and the disabled," "$300 billion for business and manufacturing," "$100 billion for school construction," "$100 billion for workforce development programs," and "$25 billion for child-care facilities." As Charles Scaliger points out in The New American magazine, not only are these provisions enormously expensive, but they have absolutely no legal basis under the U.S. Constitution. Under the 10th Amendment, all of these areas are reserved to the states.

Negotiations over the specifics of an "infrastructure" spending bill are ongoing and a bill number has not yet been assigned. Senate Majority Leader Chuck Schumer (D-N.Y.) has announced that he will move on the bill in July regardless of whether negotiations succeed or not.

Congressional Republicans must not compromise on such a radical and unconstitutional "climate change" plan. Unfortunately, the Senate GOP is already negotiating with the Biden administration; it published a $568 billion counterproposal, along with a subsequent $1 trillion proposal. In addition to including multiple spending provisions that, again, violate the Constitution, their plan would establish a national pilot program for a draconian "vehicle-miles-traveled" tax. Meanwhile, several Republican senators are working separately with Democrats for a "bipartisan" deal.

Although the Biden administration has expressed pleasure at Senate Republicans' cooperation with its spending proposals, it and congressional Democrats plan to unilaterally pass this bill if the GOP does not cave-in to enough Biden Plan provisions. Even if this draconian plan passes, it will not satisfy the Left; Biden has already announced a new proposal on top of his "infrastructure" proposal.

Tell your U.S. representative and senators to reject this radical Paris agreement implementation plan – disguised as an "infrastructure" bill – regardless of whether it is the full plan or a "compromise." Instead, tell them to abide by the U.S. Constitution and to promote fiscal responsibility.

Although we provide a way to easily email legislators (blue box), we know from long experience that it takes a lot more interaction with your legislators to get your point across than that provided by emails alone.

That's why we provide an easy way not only to email them, but to contact them by phone, tweet, and even video message them.

Hour 3 - Steve Neil (a friend already living in a state of preparedness) comes on to talk about energy, solar, self-sufficiency, etc...

Local Republican activist and living in a state of preparedness, Steve comes on to discuss solar and renewable energy, self-sufficiency, etc...