Stewart is the founder and Director of Oath Keepers. He served as a U.S. Army paratrooper until disabled in a rough terrain parachuting accident during a night jump.

He is a former firearms instructor and former member of Rep. Ron Paul's DC staff.

Stewart previously wrote the monthly Enemy at the Gates column for S.W.A.T. Magazine

Stewart graduated from Yale Law School in 2004, where his paper "Solving the Puzzle of Enemy Combatant Status" won Yale's Miller prize for best paper on the Bill of Rights. He assisted teaching U.S. military history at Yale, was a Yale Research Scholar, and is writing a book on the dangers of applying the laws of war to the American people. 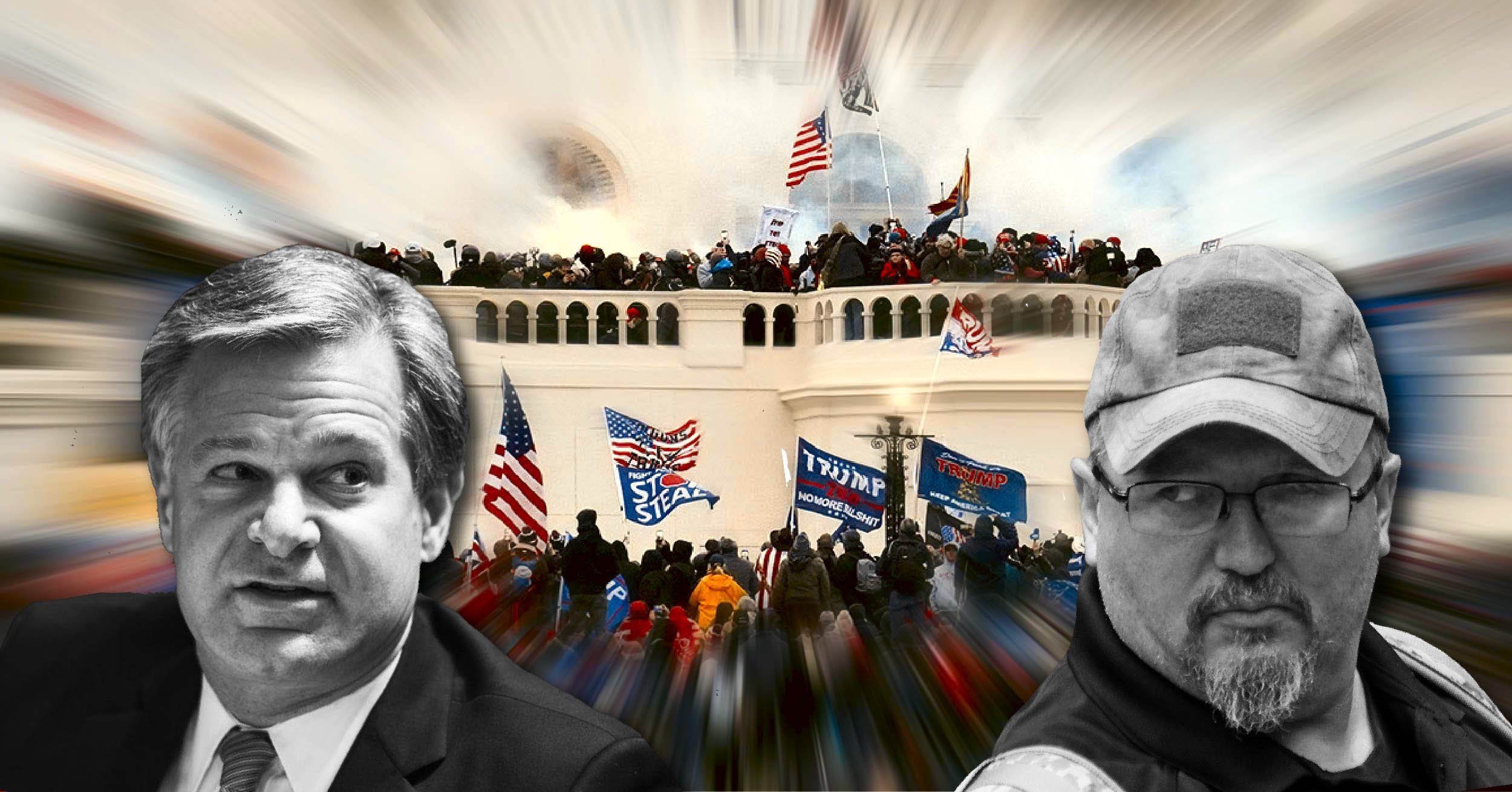 Hey Republicans, you can crack open the entire story of January 6, 2021 ("1/6") with one simple question: what relationship do the FBI and Army Counterintelligence have with Stewart Rhodes? Stewart Rhodes is the founder, boss and kingpin of the Oath Keepers.

The Oath Keepers, we are told, are America's largest militia, the most prominent antigovernment group in the United States, and the preeminent right-wing domestic extremist insider threat to the entire U.S. military.

Whatever the truth of these hyperbolic claims, the fact remains: the Oath Keepers are the most extensively prosecuted paramilitary group alleged to be involved in 1/6. Indeed, it was the alleged "pre-planned assault" on the Capitol by Stewart Rhodes's alleged Oath Keepers lieutenants that was used as the key talking point to try to convert the day's events from a protest into an "insurrection."

Elmer Stewart Rhodes III — a one-time Army paratrooper, disbarred Yale lawyer, constitutionalist, gun enthusiast, and far-right media star — founded the group called the Oath Keepers in 2009. Since then, he has ridden crosscurrents of American anger and strife that ran from scrubby Western deserts to angry urban protests right into the Capitol rotunda.

He said it had become clear that the board had no real power. "[Stewart Rhodes] is the Oath Keepers. It's hard to separate the two," Mack said. "It's his organization, and he can do what he wants to do."

Other dissenting voices found that they were no longer welcome. Jim Arroyo, the vice president of the Arizona chapter, said relations began to fray over Rhodes' insistence on total control... [Buzzfeed]

A mere indictment of Stewart Rhodes, today, for the same conspiracy charges alleged against his underlings, would collapse the entire "threat" of the Oath Keepers that the country has heard so much about. From NPR:

Rhodes is the central figure of the organization. He is the founder, leader and center of gravity for the group. In theory, then, an indictment against Rhodes could lead to the group's collapse.

The Justice Department argues that Stewart Rhodes both substantially organized and activated an imputed plan to use violence, on 1/6, in real-time, through a series of encrypted Signal messages beginning at 1:38 p.m., as Trump concluded his rally speech on the National Mall, and 62 minutes before Oath Keepers lieutenants allegedly formed a "military stack" to rush the Capitol doors.

These facts alone, as alleged, are more than legally sufficient to secure an indictment of Stewart Rhodes. We will walk you through the mountains of direct and circumstantial evidence built on top of these allegations, but readers must understand this: the only reason Stewart Rhodes is not in jail *right now* is because of a deliberate decision by the Justice Department to protect him.

Indeed, it is unclear whether the FBI has even sought to search Stewart Rhodes's residence, personal belongings, or electronic devices, other than a single iPhone allegedly seized on the streets from agents in unmarked FBI vehicles in late April (since returned). For reasons discussed below, there is good reason to suspect the FBI will pursue a tightly controlled and very limited scope of investigation into Stewart Rhodes,. Beyond that narrow scope, they may not want the information they are likely to find.

Why doesn't anyone at the FBI or DOJ want him?

If 1/6 was an "insurrection," why protect the one man who, more than any other individual referenced in the charging documents of the 530+ open criminal cases, comes closest to the media's ravenous description of a "lead insurrectionist?"

Revolver News generated tremendous discussion and controversy with our previous piece exploring the possibility that some of the unindicted individuals referred to in the 1/6 charging documents may be undercover agents or informants.

With this piece, we intend to focus this discussion on a single individual, Person One; i.e., Stewart Rhodes — the leader of the Oath Keepers.

If it turns out that Stewart Rhodes has had a relationship with the federal government, the implications would be nothing short of staggering.

For Stewart Rhodes is not just a senior member of the Oath Keepers, he is the Oath Keepers.  Given the fact that the Oath Keepers are the major paramilitary organization imputed (by government and media alike) to be responsible for the most serious and egregious elements of the so-called 1/6 insurrection, it follows that it would not only be fair, but necessary to conclude that in an essential respect the 1/6 event was planned and orchestrated by elements of the government itself.

The following questions should be shouted from every megaphone, every street corner, and every Congressional lectern until the American people get full and complete answers:

-Does the FBI now, or has it ever, maintained a formal or informal relationship or point of contact with Stewart Rhodes, whether directly or indirectly, including through intermediaries?

-Do any other Federal counterintelligence equities, whether in military, intelligence or law enforcement, including but not limited to Army Counterintelligence, the Department of Homeland Security (DHS) the Joint Terrorism Task Force (JTTF), or otherwise, maintain or have they ever maintained a formal or informal relationship with Stewart Rhodes, whether directly or indirectly, including through intermediaries?

-If such a confidential relationship did exist between Stewart Rhodes and one or more U.S. counterintelligence equities, how do the FBI and other responsible agencies reconcile the enormous gravity of this omission from their previous deflections, non-answers, and boilerplate that they had "no actionable intelligence" before 1/6?

-If such a confidential relationship did exist between Stewart Rhodes and one or more U.S. counterintelligence equities, does this explain the FBI and Justice Department's failure to pursue criminal actions against Stewart Rhodes in similarly high-profile "right-wing conspiracy plots" in which Rhodes appears to have played a similarly driving role?

-More specifically, did the FBI or any other U.S. counterintelligence equities maintain a discrete or confidential relationship with Stewart Rhodes during the 2014 Bundy Ranch standoff? Was this fact dispositive in the Justice Department's decision to charge 19 defendants — including certain of Stewart Rhodes's alleged Oath Keepers underlings — for conspiracy to obstruct a legal proceeding, and to spare Rhodes of similar charges?

-Has the FBI even procured a search warrant for Stewart Rhodes's personal residence and home electronics? If so, on what dates and what specific categories of evidence were sought?

-If Stewart Rhodes is subsequently arrested after the date of this report (given the pressure these revelations are likely to generate), how does the Justice Department explain its failure to indict Stewart Rhodes on conspiracy charges for nearly six months, when its declared purpose for seeking bail denial for simple trespassers was the DOJ's stated need to prevent "the immediate danger to the community" defendants allegedly posed? Given that multiple Oath Keepers were charged before the January 20th inauguration citing the need to stop their "immediate danger," why did the DOJ not file immediate charges against Rhodes, and then make a superseding indictment later in time, as is their routine practice in 1/6 cases?

Stewart Rhodes and the "Shock and Awe" Standard

Before we turn to Stewart Rhodes' statements and behavior leading up to and during 1/6, it is important to keep in mind the so-called "shock and awe" standard of prosecution applied to those actually indicted for 1/6 related crimes.

AND ON AND ON AND ON….REST OF ARTICLE HERE: https://www.revolver.news/2021/06/stewart-rhodes-oath-keepers-missing-link-fbi-unindicted-co-conspirator/