Join-Us | Log-In
Freedom Forum | Translate
Allison Bricker (LibertyTalk.FM) comes on the show to discuss Big Tech Censorship and how to bypass it, alternative media, the power of controlling the narrative, propaganda, etc... The Future of the Resistance

1 - Allison Bricker (LibertyTalk.FM) comes on the show to discuss Big Tech Censorship and how to bypass it, alternative media, the power of controlling the narrative, propaganda, etc...

Allison Bricker is the founder & CIO of LibertyTalk dot FM. She was previously the Editor in Chief for the Mike Church Show on Sirius XM as well as The Smoking Argus Daily, where her editorial & interviews with law enforcement regarding the Indiana Supreme Court decision in  Barnes -vs- Indiana, which attempted to bypass the state constitution and allow warrantless house to house searches, created an outcry culminating in the General Assembly overturning the court decision, landed her a citation in the Indiana University Law School Review, and managed to trigger statist rag "The Week" who published an over the top STATE Supremacist response entitled "The Indiana law that lets citizens shoot cops." http://libertytalk.fm/

If you would like to see about getting your show broadcast on LibertyTalk.FM, please contact Allison at either of the following ways:

Each media outlet/blog will hard code a square graphic in the upper right of the header of their website. This practice will mirror how newspapers of the revolutionary era included the "STAMP Act skull" in their masthead/broadside printing.

The graphic is an updated take on the 1765 Stamp Act graphic containing: a skull wearing a crown embossed with 'LGB', hypodermic needles in place of the crossbones, QR code, and the motto "This is the Place to Affix the VAX PASS." (see page 2.)

Graphic will be linked to website whose layout will be similar to 'Drudge Report' and feature headlines from Liberty Movement websites.

Site will also include option to donate to:

Site to be update with new headlines received from creators via private email throughout each day.
Or perhaps each participating site will have access so they may add their own headlines to the site.

The above is a tentative WORKING concept. 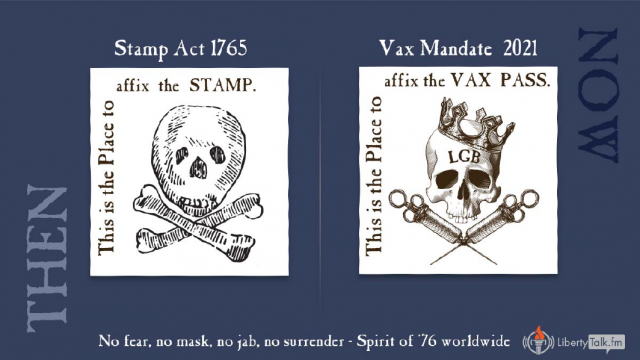 Feature Article • Africa: On the Map