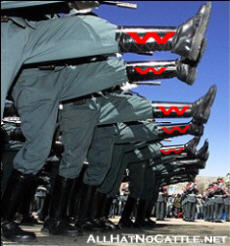 Since the Sept. 11, 2001, attacks, the Social Security Administration's vast databases of personal information have become a resource for federal investigators, who have asked the agency to check tens of thousands of records for identity fraud --

At least Harrisburg is being open and honest about its fiscal status.

Many states, cities, towns, counties and othe political districts are facing the
same (or will be) fiscal status as Harrisburg.

1.  The solution is to cut the pay, benefits, perks of all elected and appointed
officials at fed, state, local levels by at least 50% or more.

2.  The attitude that the private sector be damned...(and they should be forced to
pay and support the public sector even though their jobs and pay and benifits
have been reduced or eliminated)...needs to come to an end.

3.  Their is an old law (believe it is called the taft-hartly act) that protects public
sector jobs when elections puts new party into power.  This law stopped the
practice of bumping out the existing public work force and replacing new
worker who belong to the victorious party.
This law did not come to be in order to protect public work jobs when the
economy goes down.  Yet, some how the unconstitutional practice of
protecting public jobs via public laws has been put in place in most gov
levels (fed, state, local) over the last 40 or so years.

4.  After #1 above is done (or, concurrent with #1) public jobs must take needed
cuts is pay, perks, benefits; and in many cases many jobs will need to be cut.

5.  The public pension plans must be treated with the same protection and
paractices as the private sector plans afford their pensioned folks.  This
may mean cuts and claw-backs with public pension.

6.  Now the public sector work force ain't the only folks who will need to
step to the fore with changes.  The rest of us will need to look for some
changes:
a)   Hand-outs need to be cut, by changing all entittlements  to
needs test.
b)   In the health sector we need to cut in cost at all cost driver points
frome doctors, drugist, drug makers, medical equipment, hospitals,
etc.

7.  This is only a starting point...you can add to this list.

The blood-soaked Taliban leaders taking control of Afghanistan whose histories...