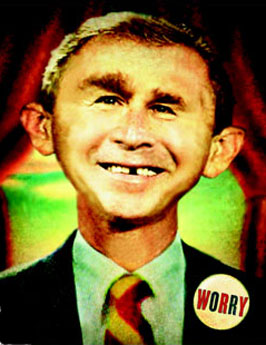 With Iraq, Afghanistan, Lebanon, and Palestine already in or sliding toward civil war, one can correctly label the Bush administration's foreign policy the most incompetent in recent memory. But the problem lies deeper than that.

1 Comments in Response to Another Civil War Exacerbated: US intervention in Somalia

Much of our intevention, certainly not all, is tied to the dollar which was tied to oil in 1971 as we went totally off the gold standard since we were running out of it due to foriegn nations cashing in their dollars for gold. We were headed for currency collapse. So, as Rep. Ron Paul wrote, so correctly, we switched from gold to oil. We promised to protect OPEC nations if they would sell oil in dollars. We put up with all of Saddam's violations they were real violations until he started selling oil in Euros. We were justified to resume the ongoing 10 year war that was only under a cease fire, for those violations. Just as Clinton had a right when he bombed Saddam, we had a right to resume.

But, why not before? Simply because he was a minor irritant with his firing on our planes, funding and training terrorists, doing plasma research on nuclear enrichment, etc. After all, he didn't have the nuclear material he needed yet. However, when he started to try and weaken the U.S. currency by reducing the demand for dollars which selling oil in Euros does, he went too far.

That is why many are concerned about Iran. It now has said it will sell in Euro's and has been joined by Venezuela. I see we are sending a 2nd aircraft carrier to the Persian gulf to "threaten Iran." But, is it nuclear fear or dollar fear that is driving it. I believe, that like Saddam, it is a combination but that the dollar fear could be a triggering device that "decides" what the reaction to the nuclear fear will be.

As other writers have pointed out, when we made "oil dollar" deal with OPEC nations, any enemies of them became our emimies as well. Some also is due to groups like al-Qaeda (groups tied to the middle east OPEC nations for funding and the shiite/sunni 1400 year rift) were used to weaken Russia. Russia knows we used them and the groups know we "used" them and while they accepted our weapons and funding and support, they knew they were the "front" and dying to further our goals as well as their own. Many, hated us at the same time they took what we offered.

So, for at least over 30 years (since the dollar for oil deal) we have had a lot of intervention policy driven by, not the oil, but the dollar and the need for oil to prop it up. Many think it was "big oil" driving decisions when it was really, "unsound dollar," driving it. The oil was visible while the "unsoundness" of the dollar wasn't visible because the sale of oil was keeping demand for the dollar strong. This article tells how that is quite well.
quote:
Because dollars can buy oil, exporters in countries that need to import oil -- i.e. most developed countries -- will accept dollars for their exports. Hence everyone who needs to buy from those exporters will accept dollars as payment for other things, and so on. To pay their bills, importers must have reserves of dollars. To prop up their currencies against speculative attacks, the central banks of all countries must have reserves of dollars. To get capital, poor countries must borrow dollars, and to service these debts they must export goods to obtain more dollars. About 2/3 of all currency reserves, more than 4/5 of all currency transactions, more than half of the world's exports, and all loans from the International Monetary Fund (IMF) are denominated in dollars. As these things create demand for the dollar and shore up its value, oil exporters are the more willing to accept payment in dollars. So the process is self-reinforcing; it's called "dollar hegemony".
http://www.trinicenter.com/oops/iraqeuro.html
=================================

Democrats And Republicans Unite To Demand US Invasion Of Cuba

China Chases US Warship Out of Disputed Seas